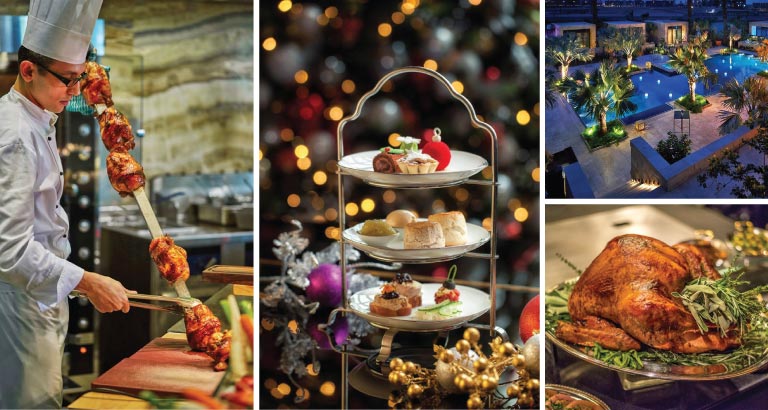 This five-star property is pushing the boat out over the holiday season.

Holidays are definitely in the air at the Four Seasons Hotel Bahrain Bay in a month brimming with celebratory activities.

Bay View Lounge has a Christmas afternoon tea right the way through until January 1, daily from 3pm-9pm. The price is BD15++ per person or BD28++ for two people.

Ahead of National Day, on December 15, Bahraini chef Tala Bashmi will be the guest chef in a continuing series of hosted dinners at re/Asian Cuisine by Wolfgang Puck. Tala and Puck chef Brian Becher will be offering an all-new cutting-edge menu focusing on local ingredients. The dinner costs BD47. Call 17 115-046 for reservations.

The National Day celebration continues at Bahrain Bay Kitchen on December 16 with a Bahraini-themed buffet brunch including dishes such as ghouzi, prawn mmawwash and Bahraini date cheese cake. Local musicians will provide entertainment and staff will be clad in traditional dress. The brunch runs from 12.30pm-3.30pm and is priced BD16++.

Kids get their own special National Day treat at AlHosh – Kids For All Seasons Club where they can enjoy activities such as national flag cookie decorating, a fashion show for best Bahrain national dress, piñata, Olympic games, face painting, henna tattoos, Bahrain flag making and an arts and crafts parade. Free for in-house and brunch guests.

The chefs at both CUT by Wolfgang Puck and re/Asian Cuisine by Wolfgang Puck have prepared a sweet surprise to accompany every lavish meal on December 16 and 17. There’ll be complimentary sticky toffee date cake following lunch and dinner at CUT and after dinner at re/Asian.

National Day is also celebrated at The Spa with a 30-minute upgrade on selected 60-minute treatments as well as spa gifts for customers.

Enjoy a Michelin-style Christmas dinner at CUT by Wolfgang Puck on December 24 and 25 for BD45++ per person. Or check out the restaurant’s Christmas brunch, featuring a lavish American spread from 12.30pm-3.30pm, priced at BD24++ with soft drinks or BD34++ with selected beverages.

Turkey with all the trimmings coupled with a great selection of other goodies and accompanied by live music, promise a great festive atmosphere for both Christmas Eve dinner and Christmas Day brunch at Bahrain Bay Kitchen. Both meals are priced BD35++ with soft drinks and BD45++ with full beverage package.

The Kids For All Seasons Club has Holly Jolly festivities for the little ones daily for youngsters aged four to 12, from 9am-6pm (8.30pm at weekends). They can meet Santa for gift distribution during brunch at Bahrain Bay Kitchen on December 22 and 25. And the kids’ club will be open from 9am right through to 12.30am on New Year’s Eve.

Diners can welcome the New Year with a fabulous dinner buffet with music at Bahrain Bay Kitchen. The event runs from 8pm-1am and costs BD35++ including soft drinks and BD45++ with a full beverage package, which includes entry to the Azure New Year’s Eve Party featuring a fire show, drum show and international DJ. Entry for those not dining starts at BD50 including two drinks.

There are also New Year’s Eve menus at both the Wolfgang Puck eateries starting at BD45++.

And why not start the New Year in style with the international buffet brunch at Bahrain Bay Kitchen on January 1 priced at BD25++ with soft drinks and BD35++ with full beverage package?

Other festive season offers include turkey and meats to go, allowing you to enjoy the Four Seasons flavour at home, and discounts on big name products at The Spa throughout the month.