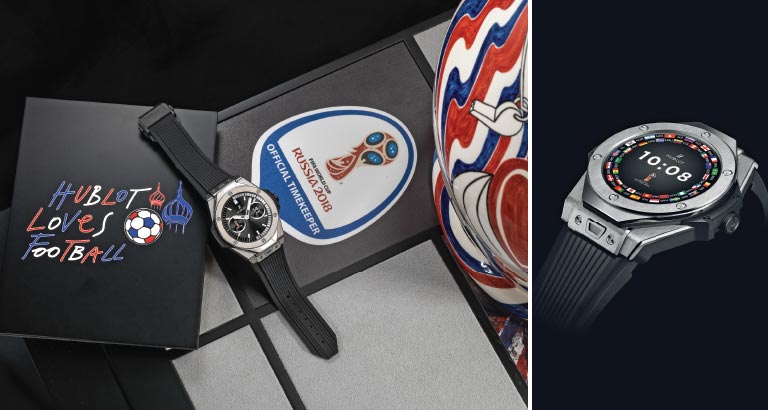 For its third participation as a branded licensee, Hublot has created the watch that all football and Hublot fans have been waiting for. A smart watch that will instantly connect you to every decisive second of the matches being played at the 2018 FIFA World Cup. A much-anticipated innovation that could not have been imagined by any other watch brand, given the extent to which Hublot and football are as one. And although you’ll have to wait a couple of weeks for the start of the competition, you can wear the connected football watch on your wrist right now!

A specific need was expressed by FIFA, and Hublot brought it to life. Wanting a customised watch for the referees, FIFA asked Hublot to conceive the perfect timepiece to accompany them on the pitches during the matches. Hublot designed this connected watch, its first, for the footballing universe: the Big Bang Referee 2018 FIFA World Cup Russia. It’s a unique edition that is limited to 2,018 pieces. It has all the attributes of the iconic Big Bang. Its emblematic architecture cut out of the lightness of titanium, its bezel decorated with six H-shaped screws, its Kevlar insert. Even the display on its analogue mode dial could pass for the same aesthetic as that of the automatic models. In terms of size, its 49mm case is what makes the first difference, then its motor, which, for the first time, is driven by technology connected to digital intelligence.

Available now in all Hublot sales outlets, this is the official FIFA watch. Beating to the rhythm of football, it immediately shows its distinctive spirit as the personification of an application specially developed for the competition and a series of ‘fan’ dials in the colours of each participating nation. Featuring several notifications, the watch announces matches 15 minutes before their kick-off, as well as yellow and red cards, player changes and goals. It vibrates, displaying the word GOAL instantly every time a goal is scored. During the match, the dial shows statistics including the score, number of cards, names of goal-scorers, player substitutions and match time.

The digital world provides the Big Bang with even greater flexibility and versatility. A watch which, having emblematically borne the first Hublot manufacture movement, has been reinvented for the digital era by offering 32 dials inspired by the flags of the participating countries, and two neutral dials. It is available in analogue or digital versions. Thanks to its patented interchangeable ‘One Click’ strap, the watch can easily be matched to one of its two straps provided. To perfect each fan’s kit, Hublot has also anticipated an additional strap in the colours of their country.

Moreover, it has thousands of downloadable applications in addition to its competition functions. It is compatible with all telephones using Android 4.4 and above or iOS 9 and above. For charging, the watch just needs to be placed on a contact charger.

For the first time, they will be wearing the Big Bang Referee 2018 FIFA World Cup Russia with its smart technology imagined by Hublot. As well as all the functions available on the 2,018 numbered models, the referees’ watches will be connected to goal-line technology, an electronic video assistance system for refereeing, which follows all the trajectories of the ball and determines for certain if the ball did or did not entirely cross the goal line. On the pitch, the watchmaker will be ever present in the game, as always, by sequencing time, changes and extra time to the rhythm of its Big Bang-shaped referee boards.

Having joined the world of football in 2006, by becoming the sponsor of the Swiss national team, Hublot is now top of the league. With its status of ‘FIFA Official Watch’ and ‘FIFA Official Timekeeper’ for the 2018 FIFA World Cup, it has a total of three World Cups, three FIFA Confederations Cups, as well as three UEFA EURO editions, and three seasons of the Champions League and Europa League.

The watches are available in Bahrain at Hublot Boutique, Moda Mall.