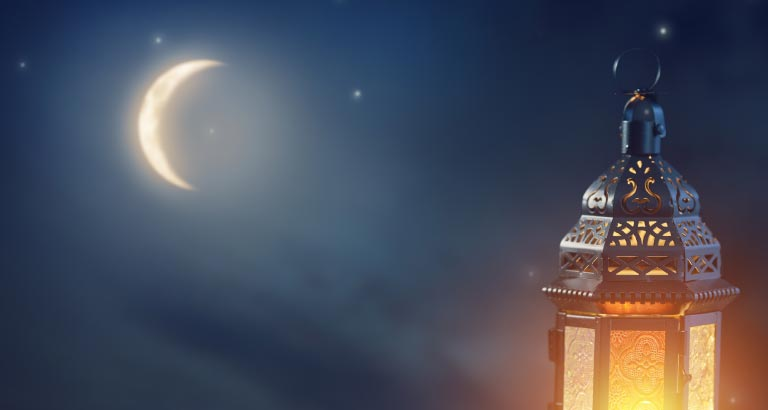 Can’t get out for Iftar? We’ve raided our archives for traditional Ramadan dishes, created exclusively for us by Janet Mujtaba, for you to try in your own kitchen.

Method
- Process all ingredients with a food processor for one to one and a half minutes.
- You can select the meat setting or start with the vegetable setting (lower speed) and move onto the meat setting.
- Form into balls.

Method
- Use a blender and mix on soup mode for 30 to 60 seconds until you reach the required texture.
- Pour over the prepared kofta and cook on a low heat in the oven or on the hob for around 35-40 minutes, until the meat is cooked through.
- Sprinkle fresh parsley to garnish.

FALAFEL
A MIDDLE EASTERN FAVOURITE THAT HAS BEEN EXPORTED AROUND THE WORLD. 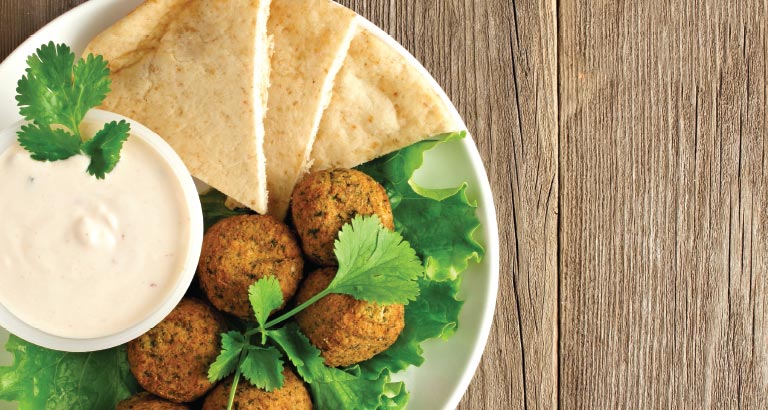 - Drain and keep separate the chickpeas and beans, rinse well and allow each to dry completely either by removing excess on kitchen paper or by placing on trays in our Middle Eastern sun.

- Place half the chickpeas to one side, add the rest to a food processor, add the beans and spices, salt and pepper and whizz until smooth and cohesive, using a spatula to mix well.

- Add the remaining chickpeas and the greens, give a quick pulse, add the baking powder and pulse again.

- Transfer to a bowl and place in the fridge for at least one hour to rest.

- Heat the oil and test with a small amount of mixutre, cook until brown to check the seasoning.

- Using an ice cream scoop to measure the mixture,
pat the ball shape into a slightly flattened shape and place into the hot oil. Cook in small batches, drain on kitchen paper.

Serve with the tahini sauce, pitta bread and salad.

Place all ingredients in a food processor and mix together until smooth. Add a little cold water if required.

Chef’s note: Whilst compiling the best falafel recipe we looked at using the canned beans versus dried. Clearly, starting from scratch with the overnight soaking of the beans is better as they hold together better and have a much fresher taste and, of course, no preservatives.

You could add other ingredients such as beetroot to make it bright red, in which case make up the basic mixture, place half into a separate bowl, add 50g raw beetroot whizzed to a powder with one tablespoon of chickpea flour to the mixture and mix well. 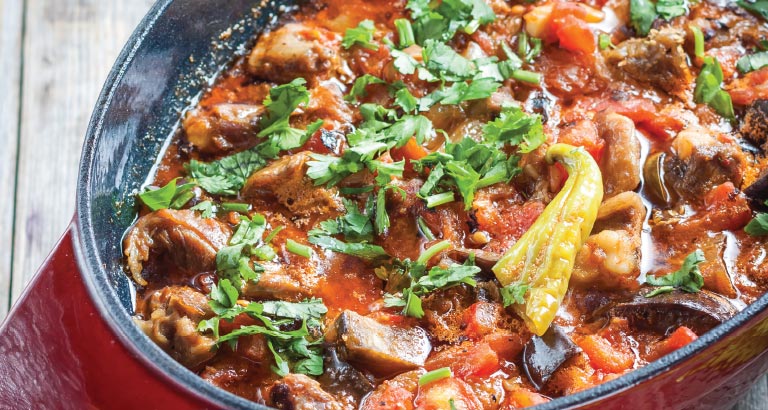 HALEEM - A traditional dish which is very popular in Ramadan as it is high in proteins and slow-release carbohydrates. It is slow cooked, originally in wood-fired cauldrons, nowadays on the stove or in a slow cooker.

KHICHRA - This dish contains the same ingredients, the only difference is that it has the bones of the meat and is not whisked at the last minute, there is added flavour from the bones. A whole leg of lamb chopped by the butcher is recommended, allow extra in weight for the bones.

- Heat the butter and oil in a pan, cook the two sliced onions, garlic and ginger, add the meat, allow to brown then add the tomatoes, spices, salt and pepper. Add some of the liquid stock, bring to the boil, add the bay leaf and cinnamon stick.

- Reduce the heat and simmer slowly for two to three hours until the meat is tender or add to a slow cooker.
- Boil the bulgur wheat until soft and mushy, remove from the heat, drain and add to the meat.
- Boil the lentils until soft, add salt, drain, allow to cool slightly and purée in a food processor.
- Add two cups of water (or stock) to the meat and wheat mixture, stir well and allow to cook for another hour.
- When the meat is cooked it will fall apart, it can be whisked for a minute with an electric whisk just to incorporate the ingredients together.
- Place into the serving dish and garnish with chopped coriander.
- The dish is traditionally served with naan or Arabic bread and accompaniments such as pickle, sliced onions and lime wedges. 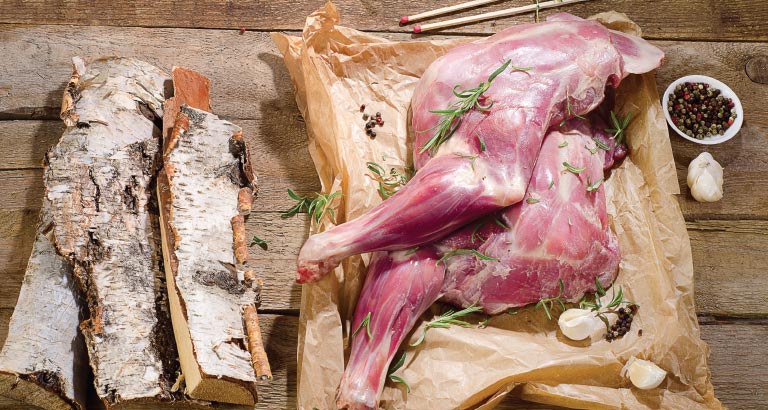 This is a healthy and delicious variation of a biryani which has some similarities to the arabic ouzi. It’s a good plan to do your preparation the day before.

The dish includes protein-rich substitutes for the 50-per-cent reduction in rice, with the inclusion of lentils, quinoa and sprouted beans along with the eggs and nuts. Turmeric, which contains curcumin, is made more bio-available by the addition of black pepper and coconut oil, the new superfood yellow paste.

Bean Sprouts
100g mung beans, soak in water for one to two days, wash twice a day leave in the kitchen. Once sprouted wash and drain.

Lentils and Quinoa
100g of each
Boil separately until slightly under-cooked, rinse and drain.

Saffron
Allow half a teaspoon of saffron strands to infuse in warm milk, add two tablespoons of rosewater and 50g butter.

Nuts
Toast gently in a dry pan quarter of a cup each of pistachios, pine nuts and almonds.

Fruits
Prepare a pomegranate, keep the seeds to one side.

Blend all these ingredients together in a food processor:

Place four lamb shanks in a lidded, plastic container, coat well with the marinade and allow to infuse for at least 24 hours – longer is better to absorb the aromatic spices.

- Remove the meat from the marinade, heat 25g of butter and one tablespoon oil in a pan, add sliced onions and cook for a few minutes, add the meat and seal it evenly.

- Add the marinade and cook by bringing to the boil then allowing to simmer gently. At this point either transfer to a slow cooker for about four to six hours or cook very gently on a low heat for a few hours until the meat is tender and about to fall off the bone, add some of the drained stock if necessary to prevent the mixture boiling dry.

- When cooked remove from the heat.

- The traditional way is to use a deep, heavy saucepan to finish the dish by steaming over a low heat with a wet towel and a secure lid. Alternatively you can use the actual serving dish that it will be presented in, that way the rice is not disturbed and has the hidden layer inside.
- Butter a large ovenproof serving dish and layer with half the rice, lentils and quinoa, cover with half the onions and half the coriander.
- Layer with meat and sauce.
- Add the remaining rice, lentils and quinoa, top with the remaining onions and position the hard boiled eggs.
- Pour over the saffron mixture and add remaining stock or spray with water.
- Cover well with a wet tea towel and wrap well with foil.
- Allow to steam gently in a hot oven at 170°C for 15 minutes.
- Remove from the oven and garnish with the remaining coriander, nuts and pomegranate seeds.
- Serve with mint and cucumber raita and/or coriander and coconut chutney. 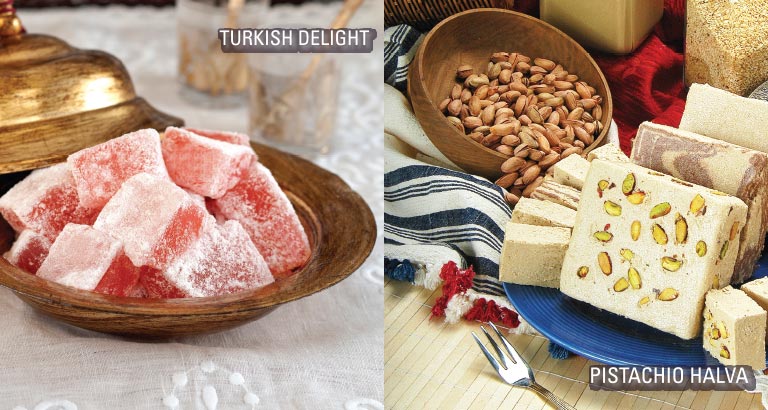 Perfect all year round but especially popular to offer guests during the holy month.

Method
- Line a square tin with cling film.
- Boil together the sugar, water and glucose, cook for 10 minutes and add the food colouring.
- Soak the gelatine leaves and add to the sugar syrup.
- Mix the rosewater and cornflour together, whisk into the mixture, cook for three to four minutes.
- Pour into the prepared tin and allow to chill for about three hours.
- Mix the cornflour and icing sugar together and spread onto a board, turn out the gelatinous mixture and cut into squares, coat well with the powder.

PISTACHIO HALVA
A most traditional dessert, found on every ramadan buffet, impress your friends with a homemade version.

- Pulverise the pistachios and cardamoms. Boil the sugar and water to make a thick syrup, remove from the heat, add the green colouring.
- Melt the butter, add the semolina and mix on a medium heat along with the pistachios and cardomoms then the milk powder, stir well on a medium heat.
- Pour in the thickened sugar syrup quickly, keep mixing until well cooked .
- Place into a buttered dish, allow to cool and then mark into diamond shapes. When it is quite cold run a sharp knife through and gently separate the diamonds, decorate with slivered pistachios and/or edible silver leaf.

To change the flavour you can use other nuts such as almonds, walnuts or hazelnuts, just remove the green colouring.