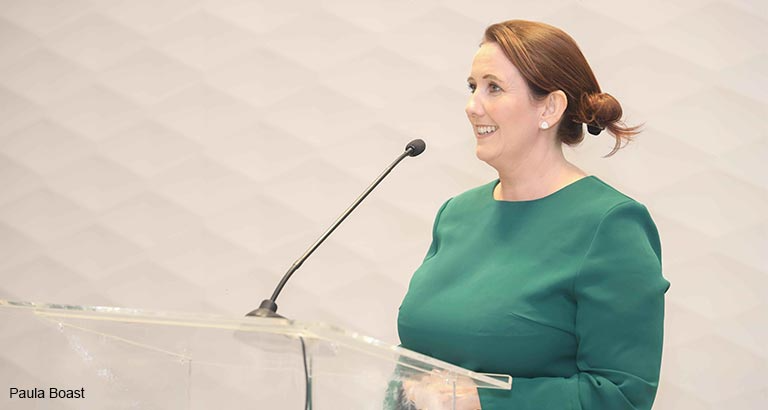 As Deputy Chair of the Bahrain British Business Forum (BBBF), Paula Boast is instrumental in managing the membership and strategising for the future. We spoke with her to find out more about her efforts to boost Bahraini-British relations.

Originally from Northern Ireland, Ms. Boast has been an international construction engineering and projects lawyer for 20 years. She first arrived in Bahrain in 2006 to focus on iconic Bahrain projects such as Diyar Al Muharraq, Riffa Views, Durrat Al Bahrain and Bahrain Bay.

She is now a partner with Charles Russell Speechlys and the current head of its Middle East projects team for the region, a job which she combines with her work for the BBBF.

She said: “I joined the BBBF in 2008 as a member. It formed a key part of my projects networking and business development plan. I volunteered for the Committee until an election year came around in 2010 and I was voted in as Special Interest Groups Officer. I was responsible for delivering key events on a sector specific basis such as banking and finance, real estate, security, oil and gas etc. In 2014 I became Deputy Chair, and remain so to this day.

“In terms of responsibilities, I am very hands on! We have a great team at the BBBF. A key part of my role is strategy and planning, and then delegation and management. So that could be for key events and our diary programme, website upgrades, communication and PR developments, diplomatic and trade liaison initiatives, meeting with incoming businesses and cross regional facilitation. It boils down to thinking about how we evolve, how we grow, how we stay relevant, and how we take BBBF into the future.”

One of the BBBF’s core aims is to promote networking and boost business ties internationally, something it does through events and conferences. Following the pandemic, more in-person meetings are expected to resume.

When asked how the BBBF has improved relations between the UK and Bahrain, Ms Boast explained: “Firstly, we operate a forum that allows people as a priority to actually meet each other and to connect. In turn that allows them to build relationships. This remains a key factor in doing business in the Kingdom. We have always been business ‘friendly’ and we remain so.

“We have members who span 20 or more years with us which is testament to our formula that networking is a cornerstone to business success. We have also driven forward cross-regional initiatives with other business groups in the region which is vital. From regional connections our members can also build global connections. So, the reach is beyond just British and Bahraini businesses.”

The Forum’s major event of the year is the Poppy Ball in November, with a further key annual event to be added in the first half of 2023. This month, there will also be special celebrations held for Her Majesty Queen Elizabeth II’s Platinum Jubilee.

Ms Boast said: “On behalf of everyone at the BBBF, we would like to pass to Her Majesty our heartfelt congratulations on her Platinum Jubilee. From a business perspective I think I speak for all of our members when I say that Her Majesty’s work ethic, adaptability and resilience stands as a shining example to us all. We have been very lucky to have had the support of Her Majesty and the Royal Family throughout the BBBF’s history and we look forward to seeing that continue.

“The Platinum Jubilee marks a new chapter not just for Her Majesty but also for us at the BBBF. After 27 years, we now start our transition to becoming the British Chamber of Commerce Bahrain. We have a lot of work to do in the year ahead but we are very excited about the future.”