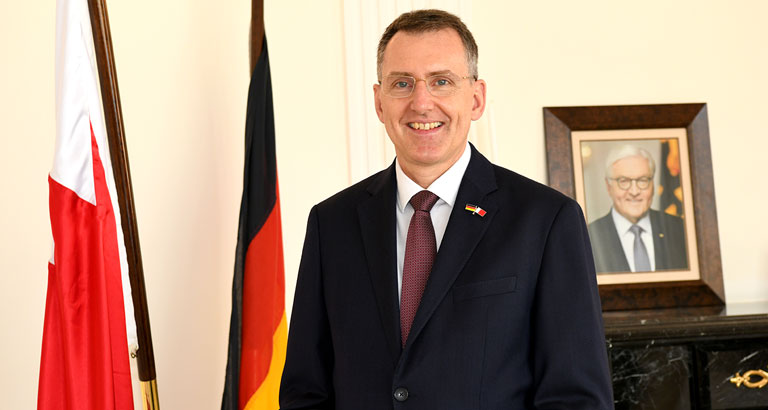 Bahrain and Germany are celebrating the 50th anniversary of its long-standing diplomatic partnership, with bilateral relations beginning on May 17, 1972. As part of our special supplement, we spoke to the German Ambassador to the Kingdom of Bahrain, HE Kai Boeckmann, about his diplomatic career and his plans to bolster ties between the two nations.

Thank you for speaking to us Your Excellency. Could you give our readers a brief summary of your experience and background prior to coming to Bahrain?
I came to Bahrain after serving with the German Ministry of Foreign Affairs for 24 years. This is a typical career path in the ministry, where you gain experience in several postings. In my case, it was foreign postings in Jericho, Buenos Aires, Rome and Cairo. Of course, I had several stints in the ministry in Germany and gained experience in consular and press work, while also serving as deputy chief of mission. While I was in headquarters, I was repeatedly involved in reform projects, which may sound technical, but were a good preparation for the administrative tasks needed to lead a mission.

How do you compare life in Bahrain to your previous postings?
I was very curious to come to the Gulf after having served in other Arabic posts in Jericho and Cairo. I must say that I find life in Bahrain very, very special. The first thing that strikes you is that I don›t commute for hours like in mega cities, but I can reach all interlocutors, friends and partners mostly within minutes! This is something which characterises the life in Bahrain.

Our contacts with the Bahraini government are very close and direct, as they are with parliament and the business community. Furthermore, the German community is very tightly knit and very supportive as we see when there are charity events. I had the privilege to host almost the entire German community and their families during occasions like the St Nicholas celebrations before Christmas in this residence garden, which would certainly not have been possible in other postings with a larger population.

On May 17, the Kingdom of Bahrain and Germany will be celebrating their Golden Jubilee anniversary of the establishment of diplomatic relations. What are your own thoughts about this momentous occasion?
My thoughts go back to the late Amir, HRH Shaikh Isa bin Salman Al Khalifa, and Federal President, Gustav Heinemann, who established the beginning of our diplomatic relationship. These were different times then, where Germany was divided in the aftermath of World War 2, and both Germany and Bahrain became members of the United Nations and helped shape the international community.

My thoughts also go to all those Bahraini and German citizens who helped to shape and bring into life our relationship in so many ways. I am grateful to all the ambassadors who preceded me and whose work I can now build upon in my daily work.

Finally, I am grateful to pioneers like Bahraini businessmen who discovered the potential of German products and the visionaries who established the DHL regional hub back in 1976.

What plans does the embassy have to celebrate this auspicious occasion in May?
We hope to be able to profit from the remarkable success of Bahrain in combatting COVID-19, and to celebrate with a series of events together with our colleagues from the embassies both: here and in Berlin.

What do you consider to be the most relevant and significant achievements of the embassy in Bahrain and German citizens over the past 50 years, and how has that contributed to the growth of bilateral relations between the two countries?
No doubt the high level visits of His Majesty King Hamad to Germany in 2008 and the visit of the German Chancellor Angela Merkel to Bahrain in 2010. We have had a number of successes and momentous events over the years, such as the embassy offering language courses to enable Bahrainis to learn German for study and work purposes and offering business round table networking.

Since your own arrival in Bahrain, what do you consider the most significant achievement so far?
One interesting step which we have done is to open up more to the general public, through our activity on social media. In 2018, we started a ‘Germany in Bahrain’ Instagram account and we are very happy that we can interact directly with our followers and receive their feedback. It is also a matter of transparency; we want to show our daily work and not be an embassy which hides behind high walls.

Once the celebrations are over, what do you consider to be your primary focus to further bolster relations between the two countries?
I think that we can work together in the fields of climate action and energy transition. Together, we have the capacity to reduce gas emissions. Germany needs to replace fossil fuels with alternative energies, especially hydrogen, and Bahrain as a classical producer of fossil fuels has the potential also to diversify and to make use of resources like solar energy and wind energy which are available in this region.

What is the current status of trade between Bahrain and Germany from volumes and projections? Can you identify specific areas of trade and collaboration that would increase in the near future?
We are very happy that despite the pandemic, trade between Germany and Bahrain is actually on the rise. Europe is Bahrain›s most important trading partner after Saudi Arabia and Germany represents a large part of the trade exchange between Europe and Bahrain. Speaking about the numbers in 2020, Bahraini exports to Germany amounted to BHD50m, about a third more than in 2019. German imports to Bahrain amounted to BHD203m which is again an increase of around 30 percent.

Of course, the most welcome German goods in the Kingdom have four wheels! I see the potential in the future for further trade in this regard because German car manufacturers have great solutions for e-mobility and Bahrain with its small size represents the ideal place to realise the vision of carbon-free traffic.

How many German citizens are currently residents in Bahrain? How has the number grown since the establishment of diplomatic relations?
We have around 500 German citizens currently living in Bahrain, and the number has been quite stable over the past years. It’s not a huge number, but it’s a very tight-knit and vibrant community and we feel that our German citizens here are the best ambassadors of Germany to Bahrain because they represent the variety and diversity of German society including university professors, doctors, engineers and technicians. 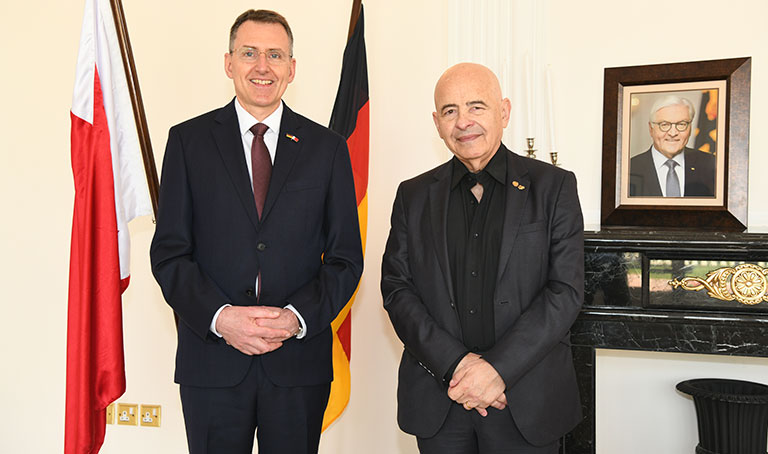 Is there anything else you would like to add?
I would like to thank on the occasion of the 50th anniversary of our diplomatic relations both His Majesty King Hamad bin Isa Al Khalifa and Crown Prince and Prime Minister Shaikh Salman bin Hamad Al Khalifa, and the people of Bahrain for all the support they have given over the past 50 years to our diplomatic relationship and to the relations between the Bahraini people and the German people in general.