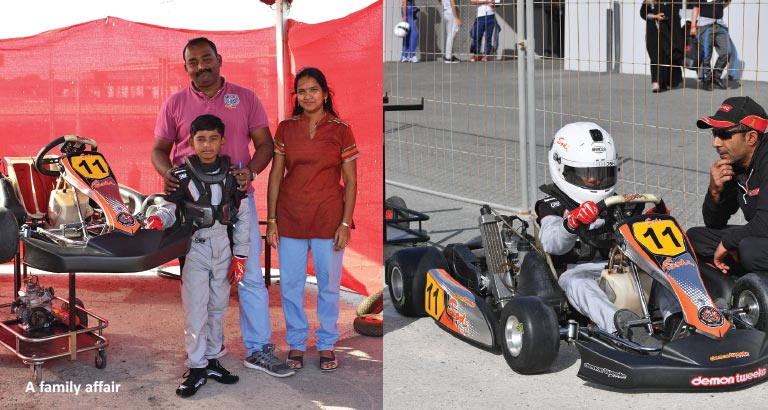 For this sport, you have to drill yourself from childhood."

Shantosh Kumar is just nine years old (almost 10) but already he has won the Kingdom’s National Karting Championship – Rotax Micromax and will be heading to Brazil in November to compete for the world title.
Kishore, who hails from Chennai, India, explains: “Both my wife, Priya, and myself are motorsport fanatics, we put our son in a kart one fine day a couple of years ago and he has never looked back! He has been driving since he was seven years old and we are at Bahrain International Karting Circuit at least twice a week for several hours of practice and competition.”

Shanthosh has a whole shelf full of trophies and even managed to win the Micromax championship with one race in hand, so his dad got permission for him to join in the final race of the season at the next level up – the Minimax. He won!

And, though the many hours of practice sounds hard for one so young, Kishore adds: “I’m just pleased he hasn’t got tired of it. In fact, he is very enthusiastic about his training every weekend. It requires a whole lot of dedication – he’s tied up almost every Friday and Thursday evenings, so there is little time for anything else.”
Asked whether he drives himself, Kishore smiles and replies: “These days I would not fit in the kart and, to be honest, it’s something you have to start young. My son’s responses are much faster than mine. For this sport, you have to drill yourself from childhood; this is the age when you can hardwire the brain.”

Instead, Kishore, an engineer, takes on much of the mechanic’s role but adds that Shanthosh perfectly understands his engine and kart settings and senses the vehicle’s performance to give efficient feedback after every session of track time. And mum, Priya, is also an important part of the team, analysing the performance figures from each race and track session to help the young driver improve. Shanthosh is currently trained by coach Yahya Ali, who mentors him to excellence.

That team effort is paying off, with an official invitation received just a few weeks ago for Shanthosh to represent Bahrain at the Rotax World grand finals in the minimax category, which takes place in Brazil from November 25 to December 2.

Having already clocked speeds of 109kph, in reality, he is now working on a simulator to get to know the track in Brazil for the world finals. Kishore explains: “Salute to coach Yahya Ali for his coaching and big thanks to Mr Silvano from Brazil for his simulator assistance. Currently Shanthosh is training on the simulator, that we have at home, to familiarise himself with the track and every aspect of the circuit.” More hard work but the whole family is clearly excited about the challenge.

And, asked what the plans are for the future, Kishore again smiles and says proudly “F1”. Kumar senior is a big fan of Lewis Hamilton, while his son follows Max Verstappen. Shanthosh was a ‘grid kid’ at this year’s Gulf Air F1 Grand Prix.

For the more immediate future though, Kishore hopes his son will soon compete in Dubai’s O-Plate series, which sees local talent pitted against the best from around the world, and possibly other karting series in the middle east.