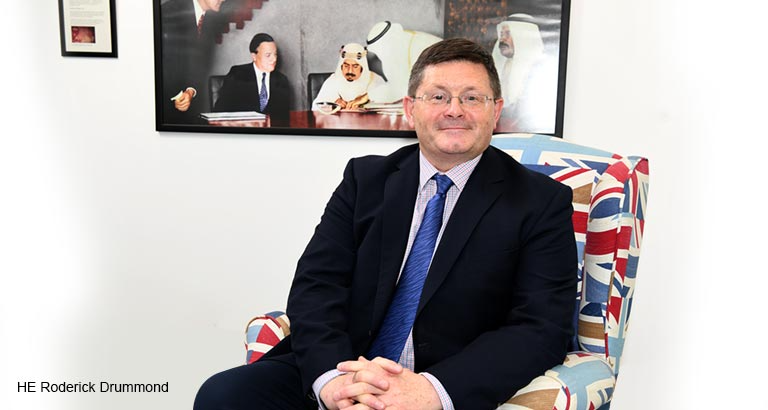 In June 2022, the British Embassy, the British Community and the people of Bahrain will join together in celebration of Her Majesty Queen Elizabeth II’s Platinum Jubilee Anniversary. On the occasion, Bahrain This Month spoke to the British Ambassador to Bahrain, His Excellency Roderick Drummond, about his time in the Kingdom so far and significant developments that are sure to enhance bilateral relations between the two Kingdoms.

Your Excellency, you’ve had an extensive career spanning three decades. Could you give our readers a brief summary of your experience?
It sometimes doesn’t seem like such a long time, but I have gathered a bit of experience over the years, mostly in the Middle East - Syria, Jordan, Qatar, Saudi Arabia, and Bahrain. It’s always been dealing with quite a mix of issues with prosperity trade investment being a common theme apart from security in some places. This is in addition to getting to know and develop relations with each of those countries. Experiences in Africa, the South Pacific and Fiji were also fascinating and provided a real contrast to working in the Middle East.

What are your thoughts on Bahrain, compared to other countries you have been stationed at in the region?
Well, I’ve always enjoyed working in this region - getting to know people and their culture. I find that its easier, quicker and warmer here in Bahrain than anywhere else. I have friends from other parts of this region, but we became friends with many people here quite quickly. It’s been a real joy to get to know people in Bahrain and work together with them on common enterprises.

You were appointed the ambassador to Bahrain in April 2019. What do you consider to be the embassy’s most significant achievements during this time?
Despite COVID, we’ve been able to continue to deepen and extend the relationships in many different fields that we have a shared interest in. Broadening the offer from the UK to Bahrain in the field of education has been one of the trade investments projects we have been working on. Where security and defence are concerned, I’m very proud that one of Her Majesty’s warships is now in the Royal Bahrain Naval forces.

We’ve done a lot across the board, but the thing that I’m most proud of is that it’s going to be much easier for Bahrainis to travel to the UK with the electronic visa waiver scheme.

What are your thoughts on the close bilateral relations that have existed between the UK and the Kingdom of Bahrain over recent decades? How could this be further strengthened?
One of the things that struck me here is that Bahrainis understand and know the UK extraordinarily well, enabling them to select what it is in the UK that’s relevant here. When I look at the kind of courses that are being run here with support from British universities, that’s diversifying because Bahrainis understand that those choices are relevant to their future endeavours. This is not staying still; it continues to develop. I’m very impressed with the Bahraini youth and their different perspectives.

What do you consider to be your major objective as ambassador during the remainder of your assignment in Bahrain?
I’ve got a long time to go - a year and a half. I haven’t started to think of the end of it yet, but we’re clearly coming out of COVID, and moving forward we want to check that we’re pushing in the right direction - putting our effort in the right place. As ambassador, I want to be sure that we’re backing the right schemes, getting involved in the right projects, reassessing our priorities and discussing them with our Bahraini partners.

Are there any significant or noteworthy contributions made by British citizens in Bahrain in recent years?
Yes, quite a number. I’m very impressed when I talk to the universities here; you know the British University of Bahrain is perhaps the most notable, but there are others and the way they’re developing new postgraduate offer is something that has not been done here before. I’m also very impressed with the Bahrain British Business Forum (BBBF), which has a British and Bahraini joint leadership, and is going to give a new lease of life to business ties by turning into a Chamber of Commerce as part of the British Chambers of Commerce network.

Could you highlight some of the most significant high-level delegations and VIP visits over the past 70 years?
So, over the past 70 years, I think we have to think of the visit of Her Majesty to Bahrain in 1979. The relationship with the late Amir, Shaikh Isa bin Salman Al Khalifa, was very important for so many years. And I look at the visits to the UK by His Majesty and all of the things that have flown from that, and His Royal Highness had seen all the top people including the Prime Minister and His Royal Highness the Prince of Wales in London last year.

So, I know that this is not something looking back, that’s only the historical visits, but those that have brought us to where we are today. And of course, we’ve had our own Prime Ministers here on many occasions over the last several decades because the UK-Bahrain relationship is special. It goes beyond the sort of individual components. There’s a real warmth to it on both sides and part of my job is to foster that.

Turning now to the current status of trade between Bahrain and the UK. Has BREXIT provided any specific advantages for further developments in this regard?
Yes, absolutely. So, I use as my benchmark the trade for the period right before COVID - the beginning of 2020, which was GBP 1.5 billion two-way goods and services, to both sides advantage, and after the pause and the changes around COVID, I think we’re going to bounce forward from that significantly. We’re about to start in the next few months negotiations for a free trade agreement with the GCC as a whole, and I think there’ll be some side agreements around that with Bahrain as well. The future is very bright.

What are the most popular British products and services in Bahrain?
We see lots of different professional services being offered in both directions. That’s a very strong sector that continues to grow. I think we’re seeing growth in manufacture which is going to start to take off over this next period. British firms are realising that talent is easier to recruit here in Bahrain than in London or other cities in this region, and are therefore setting up offices to take advantage of that and do part of their regional operations from here in Bahrain. The business-friendly nature of this economy remains very important and attractive in many sectors.

How many British citizens currently reside in the Kingdom of Bahrain?
Between 5,000 and 7,000 of which we believe 5,000 are permanently here and another couple thousand semi-permanently. That figure hasn’t changed in the last couple of years, but we are hearing of new firms coming in and setting up offices. There are Brits in every sector of the economy, Providing professional services in different ways: legal, insurance, financial and education. Some of them have also become Bahraini over time.

Is there anything else you can say?
Bahrain continues to delight and surprise me. I continue to find new things about this pearl… this small place in the middle of the Gulf. I’m very confident that, things are on the right track and the next several years are going to be very exciting period of optimism of growth and new developments. And the UK will be right here, part of it, working with our Bahraini partners to make it bigger and better.