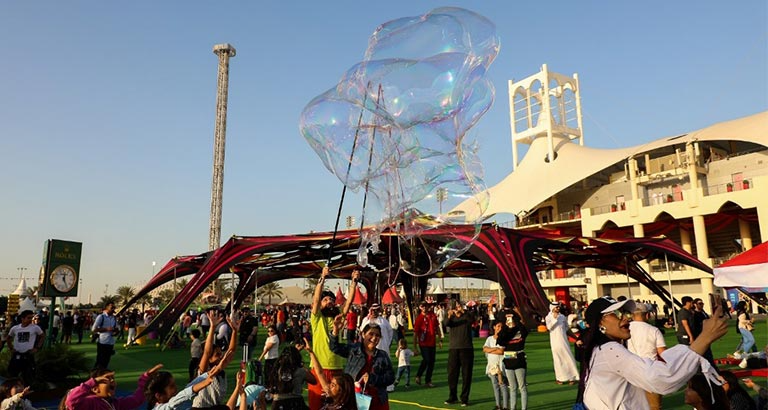 The Formula 1 Gulf Air Bahrain Grand Prix is well-known in the world of motorsport for its vibrant, festival-like atmosphere that can be enjoyed off the track at the Bahrain International Circuit (BIC).

“The Home of Motorsport in the Middle East” spares no effort each year in putting together a fantastic programme of fun family entertainment for all to look forward to throughout the three-day race weekend.

A wide variety of roaming performers from all across the globe are ready to put smiles on everyone’s faces from March 18 to March 20. These colourful characters—who will be seen around BIC’s F1 Village vending area—include dancers and musicians, clowns and magicians, and more. This includes Abraham Thill, Aras Stilt Band, the Joker group, Colour Dancers, Dr Bubbles, Funky Style Band and Jam Batucada.

Abraham Thill is a professional street- and circus-performer who has been performing since 1999. His is an energy-packed street show that includes clowning, pantomime, comedy, object- and subject-manipulations, improvisations, magic and mind-blowing Diabolo skills.

Aras Stilt Band is a combination of one of the best groups of percussionists and stilt-walkers. Their colourful outstanding costumes with big wings and beautiful music make them one of the most appreciated in Europe, inspired by the Aras colourful bird from the rainforest. The Joker group comprises a team of playful interactive clowns. They have travelled across Europe entertaining kids and the young-at-heart with acts that include fantastic circus skills, uni-cycling, juggling and stilt walking.

The Colour Dancers are charming stilt-performers in glowing colours with light-footed dances and comical interactions. They dance through streets, parks and rooms in ever-changing formations. Dr Bubbles is a flambouyant character who comes up with colorful creations through giant soap bubbles which come in all shapes and sizes.

Funky Style Band is an innovative and captivating group in the panorama of marching bands. They have eye-catching uniforms and play and dance with the grit and enthusiasm typical of a respectable street band, while maintaining the elegance of the Italian funky style. Jam Batucada performs a fusion of rhythm, taste, colour and dance through Brazilian and Latin American sounds.

The F1 Gulf Air Bahrain Grand Prix is set to be an historic, once-in-a-generation occasion for motorsport, as it ushers in “A New Era” in F1 following the biggest shake-up in F1 rules and regulations. There will also be loads of racing, as F1 will be joined by the FIA Formula 2 Championship, the FIA Formula 3 Championship and the Porsche Sprint Challenge Middle East.
To add to the roaming performers off the track, BIC’s spectacular entertainment programme will be highlighted by the back-to-back concerts on the Friday night of the race weekend, 18 March, when globally renowned DJs Don Diablo and Afrojack will take to the stage for separate live performances.

Tickets for the Grand Prix are available online at bahraingp.com or by calling the BIC Hotline at 17 450-000.