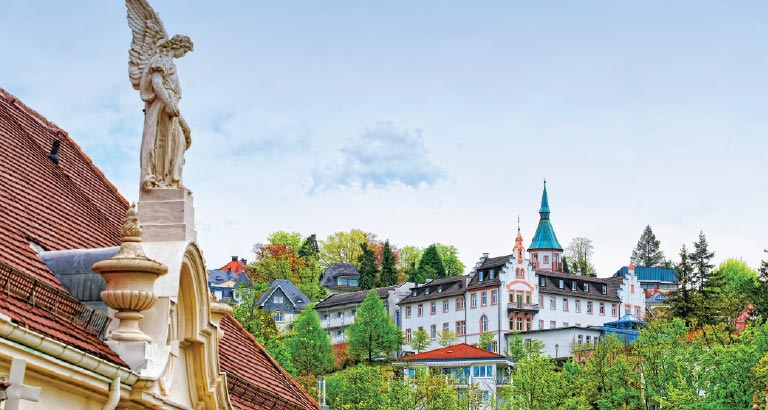 Germany is a country known across the world for its spas. Don’t book your next trip without our guide to our top five pampering destinations.

Located in the state of Baden-Württemberg in southwestern Germany, Baden- Baden lies at the northwestern border of the Black Forest mountain range on the river Oos. The town’s springs were known to the Romans as aquae and the name Baden actually means bath or bathing. You can look forward to an exceptional thermal bath in springs of water sourced deep in the earth, while surrounded by the hills of the Black Forest.

The city offers many options for sports enthusiasts; golf and tennis are both popular in the area and horse races take place each May, August and October at nearby Iffezheim. The countryside is ideal for hiking and mountain climbing and in the winter Baden-Baden is also a skiing destination.

This is a spa town in the Bavarian region of Lower Franconia and seat of the district Bad Kissingen. Situated to the south of the Rhön Mountains on the Franconian Saale River, it is one of the health resorts which became famous as a ‘Weltbad’ in the 19th century.

The KissSalis Therme bathing centre is a highlight of the town. It was completed in 2004 and includes 10,000sq/ft of water surface which derives from the Schönborn springs.

There are several music and entertainment festivals throughout the year, including the Kabarettherbst and the Kissinger Piano Olympics, both of which take place during the winter. And the town and surrounding area offer a wide range of sports from football to shooting.

Part of the Frankfurt Rhein-Main urban area, this town is best known for its medically useful waters and spa and for its casino. The spa industry began with the discovery of the Elisabethenbrunnen (brunnen is German for well) in 1834. The first spa building and the first casino in Homburg were built in 1841-1842 by the brothers François and Louis Blanc, who later took over the Casino in Monte Carlo.

As well as the world-renowned spa, the town boasts a triathlon week, cycle racing, a beautiful Christmas market and a range of events from poetry to castle concerts throughout the year.

Located about 20 miles from Passau, the town is famous for its stunning views over the countryside of Bavaria. There are numerous hotels offering professional wellness teams.

The thermal water of Bad Griesbach comes from a depth of more than 1,500 metres and is recognised as one of Europe’s most fluoride-rich sources of sodium hydrogen carbonate. Naturally heated, it is used to treat rheumatic and digestive disorders, among others.

Bad Greisbach is also extremely popular with golfers, boasting no fewer than six 18-hole courses as well as a number of shorter learners’ courses.

Wiesbaden is one of the oldest spa towns in Europe. Its name translates to “meadow baths”, making reference to the hot springs. It is internationally famous for its architecture, climate (also called the “Nice of the North”), and its hot springs. At one time the town boasted 26 hot springs; 14 of these are still flowing today.

Situated in central western Germany on the north bank of the Rhine, there is evidence of settlement at Wiesbaden going back to the Neolithic era.

Each May, the town hosts an international arts festival, featuring music, dance, lectures, cabaret and more and, from the end of November until December 23, it is home to the Shooting Star Market with its massive decorations and 28-metre Christmas tree.