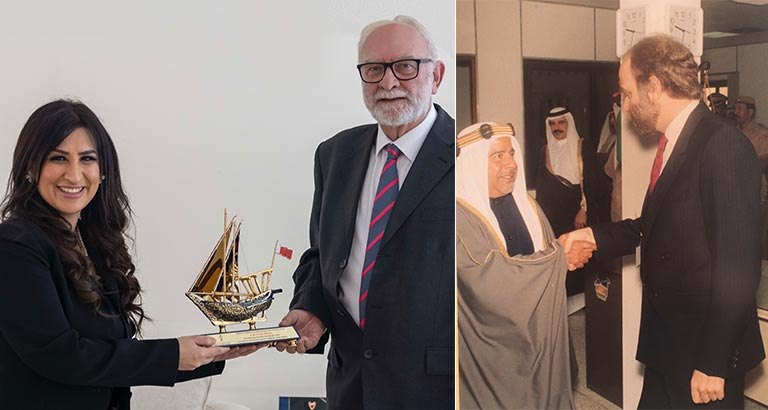 George Williams is one of the most renowned figures in local media, having held a long and distinguished career as the editor of the biggest English language newspaper in Bahrain. We found out how he used his position to bolster ties between the two nations.

In 2020, after a career spanning 42 years, George Williams retired from his position as the editor-in-chief of the Gulf Daily News. To this day, it remains the highest-circulated English language daily newspaper in the Kingdom, while the benefits his work brought to the press industry as a whole are innumerable.

Furthermore, the newspaper helped to bolster ties between Bahrain and the United Kingdom in terms of story coverage and the simple matter of spreading the English language amongst the local community.

Mr. Williams said: “I dedicated more than four decades of my life to the development of Bahrain’s press industry – hugely supported by Anwar Abdulrahman and Ronnie Middleton. Between us we built Bahrain’s first daily English language newspaper from nothing into a formidable force for change. Despite challenging times for the print industry, I am very optimistic that, in tandem with online sites, it can still sustain significant reach and clout.

“However, fake news pumped out constantly on social media does sicken me. Gone are the days when a newspaper was the main source of reliable, truthful news. An editor could control the veracity and honesty of every word he or she published. Now everyone thinks they can be journalists, so by the time a story is read in morning editions, several false and embellished versions may have already been circulated online!

“We must always strive to set the standard for ethical journalism and freedom of expression in Bahrain and regionally.”

As the only British editor-in-chief in the Middle East at the time of his appointment, Mr. Williams worked tirelessly to strengthen the bond between his home and adopted nation. The GDN often worked closely with the British Embassy and the large British expat community in the Kingdom, whilst also involving itself in various Commonwealth Office surveys and initiatives. One particular highlight of his career was documenting the Queen’s visit to Bahrain in 1979.

“I made a point of giving priority to any UK royal visit to Bahrain, and vice-versa, liaising closely with UK and local officials,” he said. We also carried many articles promoting Bahrain and British cultural activities, which I would often place with UK publications, news agencies, radio and TV stations. The famous Windsor Horse Show, sponsored by His Majesty King Hamad, was always a key fixture for example.

“British links permeate deeply in the fabric of Bahrain society, business and culture. In fact, it has embraced the British concept of thinking in many facets of life. I’m proud of this.

“In return, from Bahrainis I learned courtesy, tolerance, patience and self-respect, which are now the cornerstones of my daily life.

“I would like to think that my efforts helped take English-language journalism in Bahrain to another level, and even into a golden era. I believe I have helped lay the groundwork in promoting press freedoms and reforms in Bahrain – helped by an amazingly enlightened King and Crown Prince who promise a bright future with vision.

Mr. Williams reserved his final words for the Queen. He said: “The Queen’s Platinum Jubilee is immensely important to me as it marks the first time a British monarch has spent an unprecedented 70 years on the throne. I for one will definitely be attending functions and street parties here in the UK – as I hope will many Brits in Bahrain. What a milestone! I also look forward to visits here by members of Bahrain’s royal family, whose close relationship with three generations of British royals has spanned decades and endured.