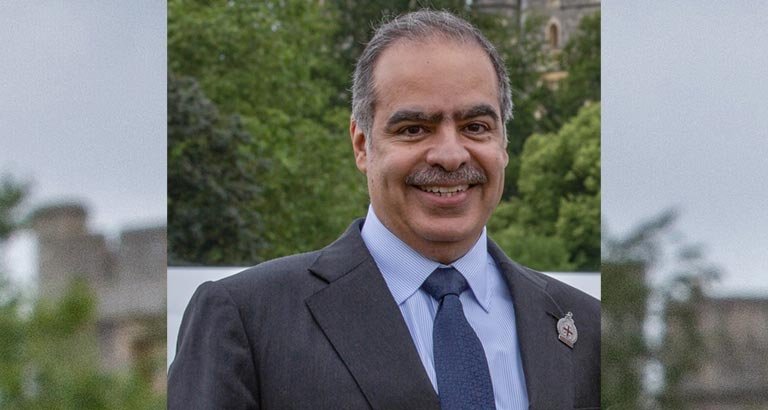 The Kingdom of Bahrain and the United Kingdom have enjoyed strong diplomatic relations for several decades. On the occasion of the celebration of Her Majesty Queen Elizabeth ll’s Platinum Jubilee, we spoke to the Kingdom of Bahrain’s ambassador to the UK, His Excellency Shaikh Fawaz bin Mohamed bin Khalifa Al Khalifa, about his thoughts on the milestone, his diplomatic experience and the historic ties.

You’ve had a distinguished career since joining the Bahrain Civil Service Bureau in 1990. Can you give us a brief summary of your diplomatic postings and missions so far?

Serving the kingdom, both at home and abroad has been the greatest honour of my career. My diplomatic posting began as an ambassador of the Kingdom of Bahrain to the Court of St James’s in 2015. I handed my credentials to Her Majesty Queen Elizabeth ll in December 2015, serving as the Kingdom’s 11th ambassador to the United Kingdom, since we commenced our diplomatic relationship with the UK in 1971.

Shortly afterwards, my mandate expanded to provide non-resident representation to some of the key countries in Western Europe including Netherlands, Ireland, Spain, Sweden, and Norway.  Out of the countries in Europe, Bahrain has about five or six covering Western Europe. So, each ambassador covers quite a bit in terms of being a resident and non-resident ambassador basically the mandate there is to strengthen while supporting Bahrainis residing in those countries.

What are your key observations about living in the UK? How does it compare to your previous postings?
I’ve experienced living in the UK during my commissioning course in 1993 and have been coming here with the family and kids on a regular basis. So, when I was first appointed as ambassador here, it wasn’t a new place or significantly different than what I’ve been used to and I have felt right at home since day one. We are accustomed to a lot of things that are similar to Bahrain.

What do you consider to be your most significant achievement since joining the Court of St James’s?
There have been a few memorable milestones. I think we had a number of official visits either here in the UK or in Bahrain, His Royal Highness Prince Charles visited Bahrain, and he chose Bahrain for his only day off in the Gulf - a reflection of the depth of the relationship between the two countries.

Here in the UK, His Majesty King Hamad usually comes every year for the Royal Windsor Horse Show and is hosted at Windsor castle every year. His Royal Highness Prince Salman bin Hamad Al Khalifa, the Crown Prince and Prime Minister’s first official visit abroad was to the UK where he met with Prime Minister Boris Johnson. So, all of these, plus I have almost 200 official visits per year from Bahrain to the UK.

It’s quite a busy schedule here in the UK where we tend to a number of issues that are related. However, during the pandemic I saw quite a bit of work between our two governments, whether in terms of sharing knowledge, experience and knowhow. We saw it firsthand, a number of issues regarding dealing with the pandemic first, and were lucky to both recognise the issues related to it and address them very early on. So, we were lucky, in the UK and Bahrain, to overcome the pandemic with as little damage as possible. That was quite a significant cooperation between the two countries.

How many Bahraini expats live in the UK and what’s the main reason for them being there?
There are a few thousands of Bahrainis living here who feel right at home and we support them in any way we can.

What activities does the embassy of the kingdom of Bahrain in the UK undertake to promote cooperation and unity between the two countries?
We have to basically engage, engage and engage. The embassy is focused on forging a strong relationship across all parts of society here in the UK, whether it’s policy shapers or taking people-to-people relations to new heights on a daily basis. So, we are engaged on all levels of people that influence policy here in the UK.

What image of Bahrain does your embassy in the UK project to the host country?
Well, the Kingdom of Bahrain has a bold vision for the future and HRH Prince Salman bin Hamad Al Khalifa, the Crown Prince and Prime Minister held, in February of last year, his first wide ranging briefing since his appointment as Prime Minister. It was then that he made clear his ambition to unleash the full potential of the country’s economy, built on competition, innovation, adaptation and growth; a country that works with old friends and new allies across the globe to foster an open competitive environment with access to a global economy that rewards creativity and excellence. Our bilateral relations are anchored on a strong deeply-rooted partnership, not only in defense and mutual security interest, but trade, commerce and the bonds of friendship that go across the geographic borders in Britain and Bahrain.

It’s not time to rest on our previous successes. Our nations are focused on having a meaningful, outward looking future where positive engagement and cooperation with global partners are more important than ever before. Yet, for all of this success, there is much potential yet to be unlocked.

You’ve had several achievements in your career. Which of your experiences do you think have helped prepare you most for your role as ambassador?
It’s been accumulating. I think the working experience whether when I first started at the Civil Service Bureau or later on as Head of the Youth and Sports Organisation, or at the Information Affairs Authority, builds up your experiences of how to engage and communicate with other officials, whether in Bahrain or abroad.

So, I believe that it’s an accumulation of work that I’ve done before. However, I think what’s important is how to project Bahrain’s image and ideas abroad and how to foster these relationships that is key to making any diplomat’s work a success.

From your experience, what personality traits are required to make a good diplomat in general?
What I’ve seen here, considering that London is the largest host of diplomatic entities anywhere in the world with over 20,000 diplomats working and living here, is that communication is key. In addition, to become a successful diplomat here in London, being social and quite knowledgeable is essential because you’ve got a community here in London that understands the region very well. I think it’s very important to understand the politics of the region and how you can communicate that well.

What are your personal thoughts about the Platinum Jubilee of Her Majesty Queen Elizabeth II? Do you have any words to share on behalf of Bahrain?
The Platinum Jubilee is a testament to 70 years of opportunities and many challenges shouldered by Her Majesty the Queen throughout her reign. She has been a symbol of stability and continuity in an ever-changing world, living and working by her principles of service, duty and hard work is what many across the world who work in public service strive to emulate.

We are glad to have been able to celebrate the Royal Windsor Horse Show with her recently and to mark both, her birthday and her Jubilee. The vocabulary of the Bahrain Royals who took part alongside the participating countries, and the concluding was a whole show, which was held and her part of the celebrations. They will also take part on June the second for celebrations in front of Buckingham palace as well. So, we will participate in a number of events during that weekend and wish Her Majesty all the best.