Taking Pride in the Capital 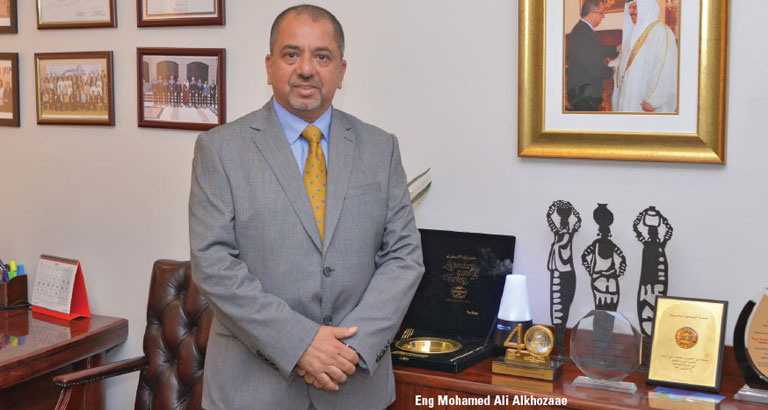 Chairman of the Capital Municipal Council, Eng. Mohamed Ali Alkhozaae sheds light on matters affecting his area, one of the biggest in the Kingdom, and the strategies to improve it.

No stranger to managing teams and taking big decisions, Mohamed has his eyes firmly on one goal – supporting and working towards the betterment of his community.

A civil engineer by profession, he graduated from Ramaya College, Bangalore University, India. He was a project manager at Batelco for more than 18 years and has been on the board of the Bahrain Society for Engineers for more than 14 years. Mohamed was appointed chairman of the Capital Municipal Council, by His Majesty King Hamad bin Isa Al Khalifa, in August 2014.

“It was new for me and totally different,” he says. “First of all, I tried to understand the rules, what we were going to do, and reviewed the strategy.

“Our services involve roads, sewerage, cleaning, lighting and greenery. This is our core work. Our role is to actually monitor the executive services. We check how they’re doing and initiate new ideas. We try to create investment [for the council] or things that generate income. Also, we look at the regulations – update them, change and make new ones. One of the main roles is planning and building laws, which control the type of construction and zoning. Plus our job is to deal with most of the service ministries, such as Ministry of Health, to follow up on what is required in our area.”

The Capital Municipality covers approximately 42 per cent of the population – around 480,000 people – and areas (divided into blocks) including Sitra, Nuwaidrat, Ma’ameer, Nabi Saleh, Juffair, Manama, Karbabad, Sehla, Jidhafs and Sanabis. “It’s very big and a challenge because it reflects the image of the country for tourism, as it’s the capital,” says Mohamed.

To streamline management and procedures, the council has four committees – technical, service, public relations, and investment and finance – to deal with different issues – as well as public groups to communicate with each district for any problems. “We had a meeting with every block and explained to them that we are not involved in everything,” says Mohamed. “We also gave them emergency numbers for all services so, if for example, there is road damage, they can call them directly.

The council is working on several projects – one being the Central Market, which has been upgraded with new air conditioning and water proofing. There is talk of rearranging the parking and ways of managing and controlling the workers, where they will all be given numbers. “We are waiting for the budget for the Jidhafs market also and Sitra because these will support the public living in that area,” adds Mohamed.

Although there are no big projects in the pipeline, the redesign of the popular Salmaniya Water Garden will be starting soon.

Currently, the Capital Municipality has a mix of 44 small and big parks and two walkways for jogging. The council aims to follow international standards, with the support of the United Nations in Bahrain, including details such as the type and height of trees suitable for the Kingdom. On initiatives to increase consciousness amongst the citizens, Mohamed says: “We are working on a programme called ‘My Beautiful Capital’ – as an awareness for the public on how to take care of their city – what to do, how to support us.”

One of the messages of the campaign is that waste is harmful to the environment and health. Mohamed believes recycling is the answer and has been to Germany and Turkey to gather information and meet with companies to decide on the options available. “We should start with things like having a machine in big cold stores for recycled bottles,” he says. “We’ve agreed with the government to introduce two colours of garbage bins – green and black – for separating household waste. They are in production.”

With a budget of BD4.5 million, Mohamed says the funds will be used for maintenance and new projects.

To increase interaction with the citizens, the council holds a weekly majlis, open to the public every Thursday from 10am to midday.

Although Mohammed has a lot on his plate, he still finds time to enjoy photography, travelling and cooking!