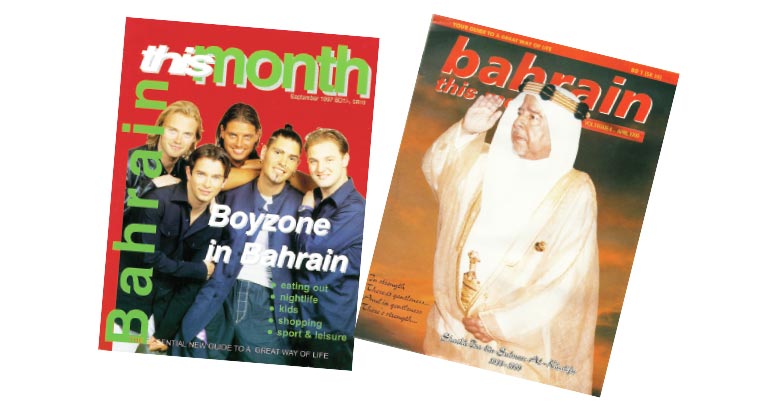 The first issue, in September 1997, arrived somewhat later than planned due to the inevitable technical glitches which still dog publishers the world over to this day. But with bona fide superstars on the cover, in the shape of visiting Irish boy band, Boyzone, and 80 pages of features and information about the Kingdom, including a write-up on BJ’s (Barnaby Joe’s) which later gave rise to JJ’s, BTM was on a roll.
That first issue also carried a section that was to prove pivotal in the magazine’s success and popularity – a double-page-spread of just eight pictures, with very lengthy captions, at page four, which asked ‘Are You a Bystander?’ And, on that score, the rest, as they say, is history. By the time we reached our record-breaking 200th edition in April 2014, Bystander amounted to more than 600 pictures over 38 pages!
Less than two years on, publisher George Middleton and his team put together an edition that brought great sadness. Bahrain’s beloved Emir, Shaikh Isa bin Salman Al Khalifa, passed away suddenly on March 6, 1999, and BTM produced a heartfelt tribute. George, who had met the long-reigning ruler the previous year, wrote: “Shaikh Isa, our King of Hearts for these past 38 years, best embodied the ideals and aspirations of this society. But, from the moment I heard of the death of Shaikh Isa bin Salman my world stopped, and I found myself among the throng of mourners who accompanied this humble, greatly admired leader to his final resting place, and the simple prose came to mind which is imprinted on the cover of this Bahrain This Month.” That prose read: “In strength there is gentleness and in gentleness there is strength.”