The Moser 1400 Always The Original 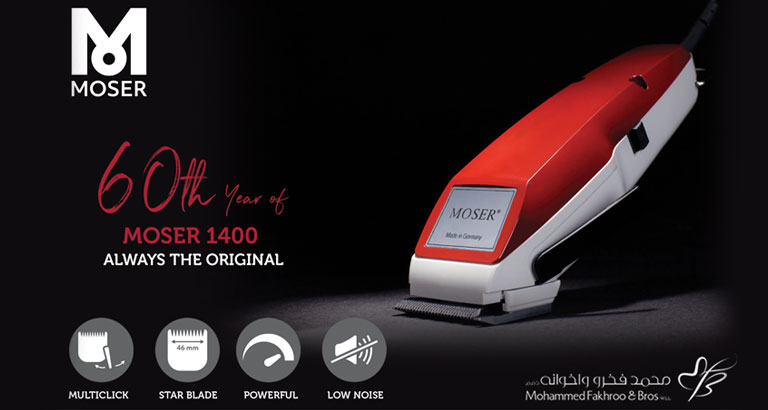 Proudly ‘Made in Germany’, MOSER is part of a legacy of excellence, through every innovation, across every decade of consistent growth, MOSER has stayed true to its commitment to precision. Every product comes with the assurance of efficiency, sharpness, quality and performance – values that have always put Germany in the global spotlight.

As a market leader in the grooming industry, MOSER manufactures some of the most widely used clippers and trimmers globally. These include the famous MOSER 1400 clipper, which has sold over 50 million times since its debut in 1962.

The MOSER 1400
The MOSER 1400 continues as the undefeated tool of choice among customers. Its growth can be credited to an unrelenting focus on delivering impeccable quality. MOSER’s ambition has fueled its growth across over 165 countries and made it an integral part of Wahl Clipper Corporation’s ambitious international growth plan.

There is no clipper like the MOSER 1400. It is nothing short of a legend, a cult favourite among professionals. Its iconic silhouette has garnered such unwavering loyalty among customers that home users buy it and take it along to their barbers – they genuinely believe only a MOSER 1400 can do the job for them!

Made in Germany, the MOSER 1400 features a solid, precision-ground, high-grade steel blade set. Its silent functioning hides the powerful working of an oscillating armature motor that has been enhanced over the years to improve its performance by 50 percent as compared to the initial version.

Only a stellar product like the 1400 is consistently in demand over decades, with over 50 million units sold globally as of 2021.

Professionals covet the striking design, extraordinary performance and inimitable precision of the 1400. Outside, though it has remained nearly unchanged for almost 50 years now, the technology powering each version is more powerful than the last. Every product is manufactured with rigorous quality and performance checks – anyone who owns a MOSER can be assured that they own a high-performing, robust clipper that will last for years together.