The New Face of Friendship 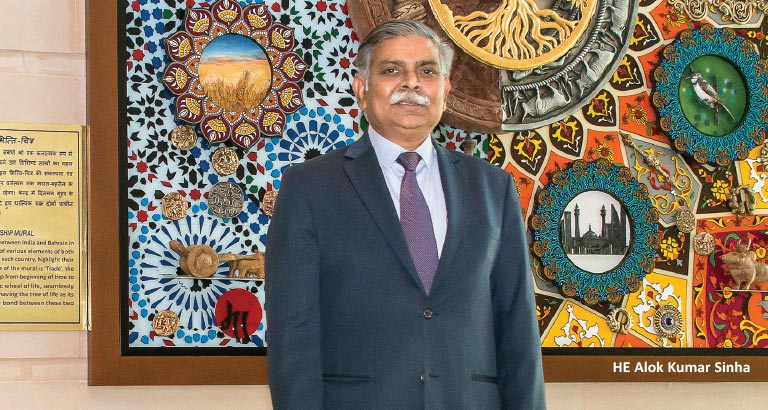 Indian Ambassador, His Excellency Alok Kumar Sinha, told Liz O’Reilly how his country’s newly inaugurated embassy in Bahrain is a visible symbol of the long-standing bilateral ties between the two nations.

I’d like to take this opportunity to express my gratitude for the support from the wise and dynamic leadership of the Kingdom.”

The expansive new building provides around 3,000sq/m of office space on an 8,000sq/m plot in Seef. Four years in construction at a cost of around BD3 million, it was officially inaugurated by India’s External Affairs Minister, Sushma Swaraj, during her recent visit to the Kingdom.

The entry is through traditionally carved 9m-high doors from Rajasthan – “The doors were originally made that high and wide so a cavalcade could come through them,” says the Ambassador. The first thing to see is a stunning mural featuring symbols of both India and Bahrain, from Dilmun seals to foodstuff and animals to scenery and even a pot made in India by the mural artist using soil from A’ali village, the centre of Bahrain’s traditional potteries.

“The concept and theme of the mural is trade, the foundation of the age-old relationship between our two countries, which stretches back through centuries of history and friendship,” says His Excellency.
Apart from its aesthetic charm, the embassy offers various new facilities including an extended consular and visa section, business facilities such as meeting rooms and presentation areas for trade delegations, a full cultural centre with a 300-seat auditorium and space for conducting yoga sessions as well as an extensive library offering books on India from economy to history, philosophy, daily life and more.

The Ambassador proudly asserts that: “There are more than 350,000 Indian expats in Bahrain, the largest expat community, so it is only right that we should have an efficient and well-equipped embassy to serve them and continue to expand on our relationship in diverse spheres with the Kingdom.”

The closeness of this relationship was demonstrated during HE Sushma Swaraj’s recent visit to the island to co-chair the second Bahrain-India High Joint Commission meeting during which bilateral ties were reviewed and steps were taken to increase collaboration in the fields of renewable energy and health. The visit provided an opportunity for meetings with the leadership, HM King Hamad bin Isa Al Khalifa, Prime Minister, HRH Prince Khalifa bin Salman Al Khalifa, and HRH Prince Salman bin Hamad Al Khalifa, Crown Prince, Deputy Supreme Commander and First Deputy Prime Minister.

“The Joint Commission is an effective mechanism to discuss bilateral relations and review ongoing Memoranda of Understanding, but also to explore new areas for increased cooperation between the two countries” says His Excellency.

“Bilateral trade is expanding rapidly. It grew by 33 per cent in the non-oil sector in 2017. The total bilateral trade has already surpassed USD1billion. One has to see the growing economic ties in terms of the developments taking place in the two countries. India’s economy has been doing well. There are several initiatives such as Make in India [which encourages manufacturers to invest in the country] and Start-up India which have created opportunities; plus add to that the growth of India’s middle class. On the Bahrain side, there’s investment in infrastructure with lots of opportunities for investment and expertise, particularly in the non-hydrocarbon sector which has seen tremendous growth. The synergies and complementarities have been reflected in increased bilateral trade and cross-investment.”

And paying tribute to Bahrain, he adds: “I’d like to take this opportunity to express my gratitude for the support from the wise and dynamic leadership of the Kingdom, which gives great strength to take the relationship forward.”

With that in mind, for the coming Indian Independence Day celebrations, on August 15, the new embassy will play host to a number of events and His Excellency is already planning how he can make use of the great cultural space with exhibitions and events to mark the 150th anniversary of Mahatma Gandhi’s birth, beginning October 2, 2018.