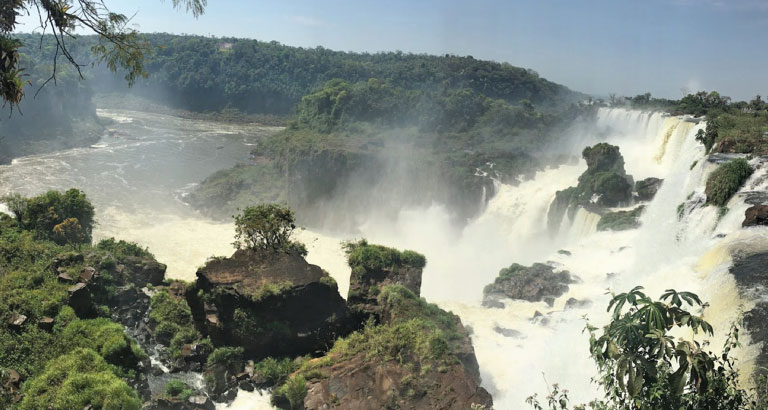 An intrepid explorer shares her journey across South America.

Twenty-three of us landed on the shores of Buenos Aires, Argentina, filled with excitement. The Savoy Hotel, our home for the next three days, welcomed us with an exclusive dinner, which was the ‘meet and greet’ kick-start to an adventure that would unfold over the next 16 days. 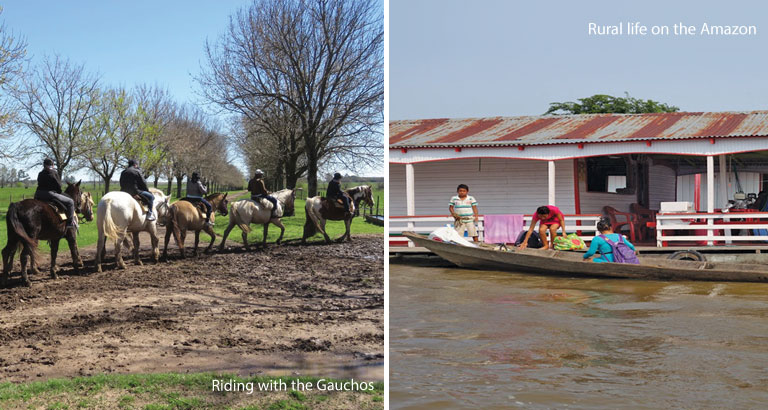 Our first day began with the tour of the famous Plaza de Mayo, featuring La Casa Rosada the presidential palace, and its balcony from which Eva Perón (Evita) had addressed hordes of supporters. That same evening we went for a dinner show highlighted by a powerful rendition of Don’t Cry for Me Argentina from the musical Evita. We enjoyed a traditional menu and an exquisite list of Argentinean grapes! We were even treated to a personal tango lesson before the actual tango performance. A perfect ending to our first day!

Humming the melody, we headed to bed to rise early for a whole day in the countryside on the beautiful Estancia El Ombu de Areco (estate with a ranch). Here we were introduced to the rituals that made these pampas (plains) so fascinating. We learned how a mouthwatering ‘asado’ (barbecue) is cooked and then got to eat it for lunch at a typical caso [main house]. We rode horses with the gauchos (cowboys) and they entertained us with their traditional music and dancing too.

Next on our agenda was the Iguacu Falls, on the Argentinean side. Climbing aboard a small train, our first stop was the Devil’s Throat (Gargantadel Diablo).This is the biggest waterfall, 262ft, surrounded by 270 further waterfalls and a verdant jungle.

The Brazilian side offered a panoramic view! We got so close to the towering falls, and got totally drenched! Words simply cannot describe this creation, an experience like no other. In fact, Eleanor Roosevelt, on her first sight of the tremendous falls, exclaimed: “Poor Niagara!” 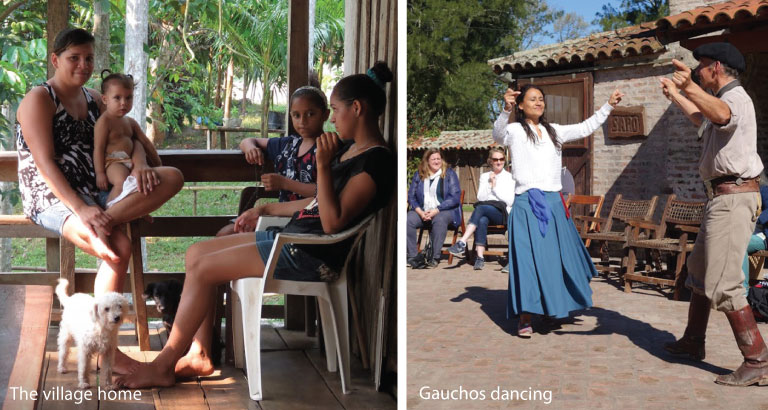 The next day we flew into Manaus, a small port from where we boarded a ship, the Iberostar, to explore the Amazonia! The crew welcomed us aboard with a cocktail, followed by a delicious dinner with an open bar policy in place for the entire four days! We were sailing on the Amazon – I learned about this in geography and here I was actually on this mighty river!

The best part was the excursions on small boats called skiffs into the narrow waterways of the region. We went trekking into the jungle, where the guide introduced us to the variety and peculiarity of the vegetation. Visiting a family in the forest was a unique experience. They used their surrounding organic resources for their food and everyday living. We also got to purchase some of the traditional handicrafts from a floating market.

The next day we ventured out piranha fishing! Exciting! We caught them and after the guide opened the mouth to explain how they can tear flesh in seconds, they were thrown back into the river. I’m just glad the boat didn’t tip over for they would’ve had the grandest feast ever! At dinner that evening, we were surprised to see fried piranhas as a dish.

The entertainment that night was a live show where a renowned local artist enthralled us with the haunting strains of pan pipes of different sizes and tones. 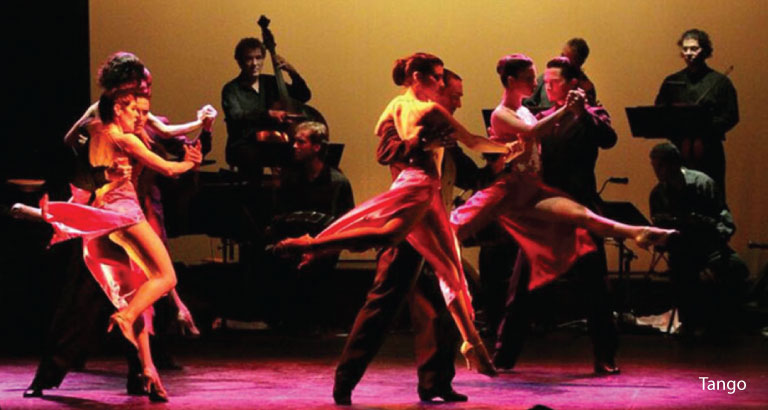 Later that night, the skiffs took us on a night safari, where we were fortunate to spot caiman crocodiles and even got to hold one before releasing it back.

On the final day on the water we woke up early to experience an awesome sunrise on the Amazon. We got to see the fascinating phenomenon known as the ‘Meeting of the Waters’, where the black water of the Rio Negro and brown water of the Solimoes meet, but don’t mix because of variations in acidity and temperature. We were also treated to pink dolphins dancing around our boat. After our last sumptuous breakfast on the boat, we disembarked, and flew out to Rio de Janeiro, known for its sensational electric atmosphere, surrounded by beautiful beaches.

Our tour of Rio started in the old city centre, the Cinelandia Square that features important buildings such as the Rio Opera House, the Fine Arts Museum and an impressive statue of Gandhi! Then on to the Rio de Janeiro Cathedral, probably the only one that looks like an angular beehive from the future, designed by Edgar Fonseca and intended to echo the ancient Mayan pyramids. The unique architecture is a meeting of four columns of stained glass that runs from the floor to the ceiling, converging into a cross. We entered to the sounds of Gregorian chants, adding to the peace and beauty of the building. 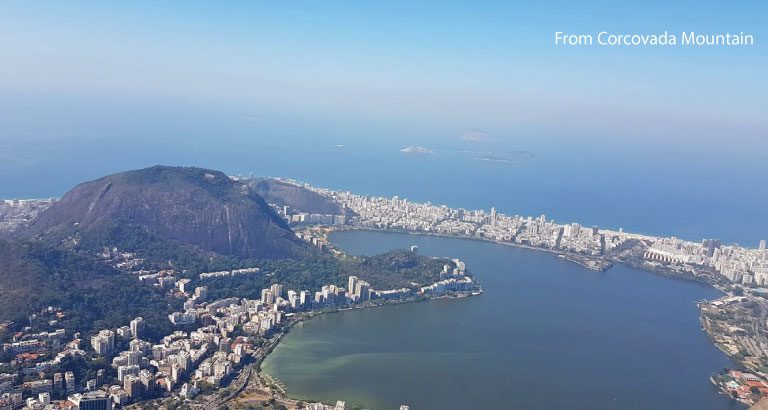 Then to the hustle and bustle of the EscadariaSelaron where we climbed 250 steps, every inch covered in brightly coloured tiles collected from all over the world with breathtaking attention to detail, the artistic work of Jorge Selaron. The steps gained popularity in recent years after Snoop Dogg and Pharrell Williams filmed their Beautiful music video close by.

A glassed cable car ride up Sugar Loaf Mountain, declared a World Heritage Site, is a must-see, offering a gorgeous 360-degree view of the city.

And finally a tour by train that took us through the Tijuca National Park, the world’s largest urban forest to the top of Corcovado Mountain to see the Christ the Redeemer statue in all its splendor, a majestic 126ft, it is simply stunning! We also enjoyed the eye-catching views of the forest below, where Rio de Janeiro’s mountains dive into the clear blue water.

A trip to Rio would not be complete without heading to The Ipanema and Copacabana beaches, watching families play soccer, every child wanting to be a Pelé or a Ronaldo, sky gliding or simply just ‘sunbaking’.

That evening, we felt the pulse of Brazil at the electrifying samba show.

Over too soon, it was time to say “Goodbye” to the land of Peróon, Pelé and the Amazonia. Our last dinner together was special, sharing memories of the last two weeks, sipping the finest coffee in the world!