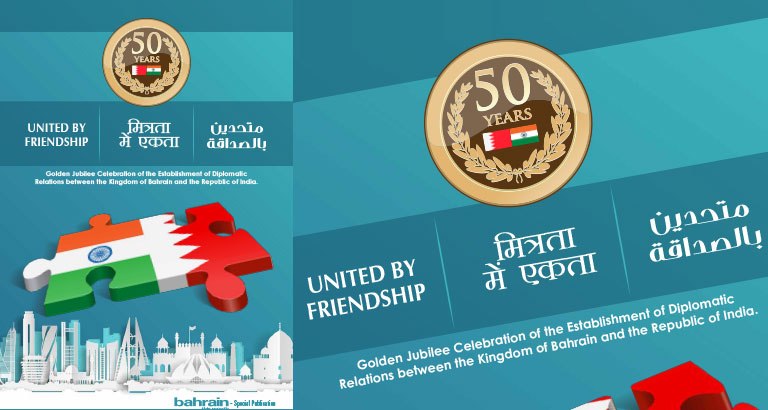 The 50th Anniversary of Diplomatic Relations between Bahrain and India is to be celebrated through a spectacular book, film and web portal.

A special media project titled ‘Golden Jubilee 50 Years United in Friendship Project (1971-2021) Bahrain & India’ is under preparation, in print and digital format, to celebrate the 50th anniversary of bilateral relations between Bahrain and India and the landmark achievements in the history between them.

In addition, a film documentary is under production featuring VIPs, ministers, celebrities, businessmen and corporate leaders from Bahrain and India wishing to associate themselves directly with this important historical milestone.

A Facebook Group https://www.facebook.com/groups/indiancommunityinbahrain/ will also serve as a vestibule of anecdotes, pictures, personal stories and history spanning the decades since Bahrain and India first established diplomatic relations. This will feed the web portal, www.indiainbahrain.com, from where the digital edition of the publication and the documentary film can be downloaded.

This is a once in a half century opportunity for all Bahrain/India associated companies, organisations, institutions, social and cultural groups and relevant associations to let Bahrain, India and the world know all about their stories from a personal, professional and cultural perspective in light of tremendous progress achieved over the past five decades.

Interviews have already been secured with a number of prominent India, Bahrain and internationally-based ministers, diplomats, entrepreneurs, actors, models, fashion designers and celebrities who have agreed to participate in print, online or through the documentary film.

Only seven unique sponsorship agreements were available for this project and with the platinum option committed to by RP Holding, to date, only two media sponsorships remain available.

Red House Marketing’s United in Friendship’s project director, George F Middleton, explains: “Our media mission is to bring to light and commemorate the special relationship that has existed between Bahrain and India; not only for the past 50 years, but going back 5,000 years when the Dilmun Era Civilisation had proven trade links with the Indus Valley Civilisation.”

He continues, ”We felt that the best possible way to celebrate this notable historical milestone was to produce a media memorial online, in film and in print which celebrates the history and diversity of the two great nations involved by highlighting family, individual and corporate contributions to this unique relationship”.

“As well as India’s Ambassador to Bahrain and Bahrain’s Ambassador to India, we are extremely grateful to the myriad of VIPs and celebrities who have agreed to take part including Diana Hayden (Miss World 1997) who visited Bahrain in 2001 as part of the Indian Embassy’s Gujarat earthquake relief fund initiative as well as famous South Indian actress Mamta Mohandas who grew up in Bahrain prior to finding fame and success in India and internationally.”