99.1 FM Listening to a Different Tune 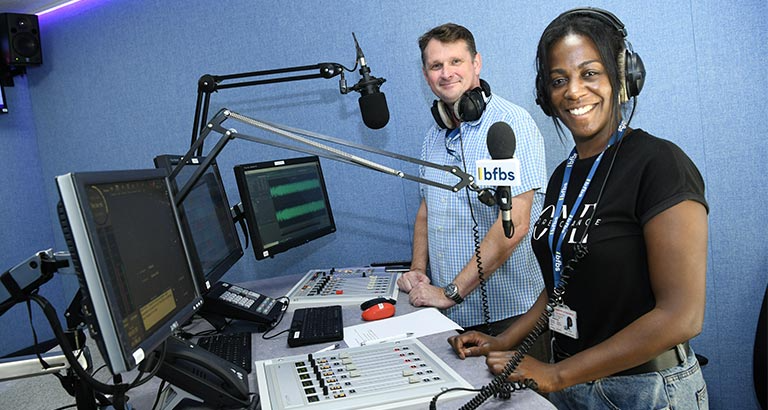 Last August, courtesy of the Bahrain government, BFBS, the military charity and media organization, was granted an FM radio license on the 99.1 frequency. A slight adjustment to the broadcast antenna’s siting in November 2021 has resulted in significantly better coverage of the station across the Kingdom.

is one of nine overseas BFBS radio stations whose mission is to entertain, inform, connect and champion the 1000s of UK armed forces and families stationed and deployed overseas.

Apart from the best popular music and 24/7 news form the UK, topics for inclusion vary from life after service in the Armed Forces, history, childhood obesity or any current topic of interest related to Bahrain and activities taking place here. Programme content can’t be too location specific, as shows emanating from Bahrain are also heard in the UK, UAE, Qatar, Mali and Estonia, so needs to capture content of interest  to all of these audiences.

It’s a tricky task but BFBS Stations Manager, Dave Roberts, is extremely optimistic about the potential for the future. “The morning show will soon be branded as local to Bahrain allowing significantly more local content”, says Dave. “This will give us a better vehicle through which we will be able to cater to our forces audience in Bahrain more effectively.”

Respectful of both Ofcom UK guidelines as well as Bahrain’s social and cultural values, Dave finds very little restriction on what he and his fellow presenters can and do say on air. With personal connections to Gibraltar, UK and Ireland, like many people who live and work in Bahrain, he has spent much of his working life ‘abroad’.

“I never really lived in UK itself”, he says. “My parents were in the military, so I was brought up in the military environment and lived all over the world. Then I went to boarding school followed by university, which was the longest time that I’d spent in the UK up to that time”.

He continues: ”From within our small studio and office space here in Juffair our priority is to deliver a personalised radio service to UK military personnel stationed in Bahrain. But our services are not just limited to the radio station. We also offer a TV platform, with the best of UK TV including BBC1, BBC2, ITV channels, Sky Sports, BFBS Sports, Sky News and a movie Channel to those serving their country away from home.”

BFBS negotiates the broadcast rights with most of the major TV service providers, film studios and premium sports providers making their content available to UK forces based not only in Bahrain but just about anywhere they may find themselves overseas. “We also deliver alternative radio services on the same system that include content from BBC radios 2, 4 and 5 Live as well. Our mobile video unit can also film and edit military stories likely to be of interest both locally and internationally.”

Dave is particularly proud of the support the station has given to local and international causes including, most notably, coverage on the Bahrain team who climbed Everest recently. According to him, the Bahrain Everest expedition is the ideal type of story content that resonates with the audience throughout the 40 countries receiving BFBS services from Canada to Brunei to Diego Garcia”.

“We are a small station with one studio and a few staff but since the service globally networked, we actually deliver our content to an international audience”, he states. “The breakfast show starts at 6 AM and goes on until 1 PM in the afternoon; delivered from our own studios. After that, we dot around the world to different studios who then feed in to the sustaining network”. 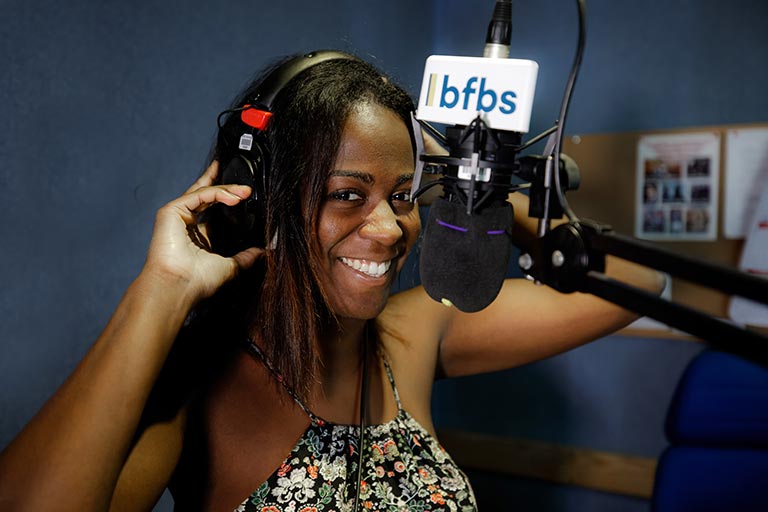 The main criteria used to decide on any topic’s inclusion on the BFBS network, says Dave, is “Is it interesting, is it entertaining and is it useful to our military community audience? We need to deliver the content in such a way that when we’re talking about something in Bahrain, the topic sounds interesting (for instance) to somebody living in the Falklands – and that includes military families, as well as serving personnel ”.

Obviously, with the emergence of the latest digital technologies, the BFBS media offering includes active social media channels including Instagram, Facebook and Snapchat in particular making it a highly interactive and engaging platform not strictly limited to radio.  The local social media is tasked to presenter Akylah Rodrigues, while the Twitter and Instagram content is sent to their digital team in the UK to process. “We send them footage, explains Dave, “and they place it on the various platforms on our behalf”.

Digital exposure is available via the online BFBS App, which includes several different genres stations on the BFBS network, as well as topic-specific podcasts to download on the spot in case the audience misses something important.

Local content, fun and games, local quizzes, sharing content from the rest of the network means that there is a lot going on which is shared specifically on the BFBS Radio social media sites.

BFBS has operated in the region for decades although, more recently, in the 1991 Gulf War they came back to the region in the most meaningful way since before the Suez withdrawal in the 1950s. They have had a presence in Kosovo, Bosnia, Iraq and then Afghanistan – as well as in the more permanent, established UK military bases overseas, such as Germany, Cyprus and Gibraltar.
After Afghanistan, the station was due to be based in the UAE but ended up coming to Bahrain; a decision decided on by the Ministry of Defence in the UK. After a temporary move to be part of the BFBS Radio station in Cyprus for a couple of years, at which time Dave had left the organisation, he was eventually offered an irresistible opportunity to set up a brand new radio entity in Bahrain which is the reason he came on board once again.

BFBS Radio presenters working on the station are based in Bahrain for approximately six months. The station is not commercial and therefore Dave and his colleagues are both willing and able to share their expertise and experience for the benefit of all concerned within the Kingdom of Bahrain. Presenters are all civilians from various walks of life, most of whom initially intern at a local BFBS station prior to being offered a contract with the organisation.

“We know we have a really big audience in Bahrain already”, says Dave, “and appreciate their engagement though phone-ins and competitions. A total staff of three look after TV, Radio and Social Media for the entire Bahrain operation.

“One of the main objectives of the service is to provide useful and relevant local information chat delivered in an unpolitical and unbiased manner. Ultimately, we want to encourage the UK forces personnel here in the Kingdom to get out of their living quarters and into town to experience the many social activities on offer in Bahrain.”