Jazzing It Up! | Ahmed Alqasim 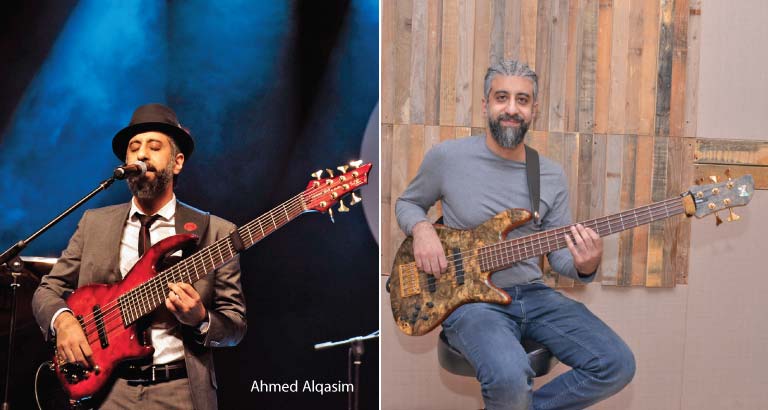 Bassist and singer-songwriter, Ahmed Alqasim, shares his musical journey and his love for jazz.

There is a certain ‘je ne sais quoi’ about Ahmed as he plays his seven-string bass guitar and renders Louis Armstrong’s What a Wonderful World. You instantly realise that he has a passion for jazz.

Music has been a part of Ahmed’s life since his childhood, as he grew up with his parents listening to Arabic classics and the likes of Umm Kulthum, Abdel Halim and Fairuz. “It sparked an interest in music from a very young age,” he says. “I was always into musical activities, whether it was singing or playing an instrument.”

He joined a band in high school and, as his confidence grew, so did his musical ambitions. He began playing with different bands and various genres of music. “I was an active performing musician from ‘97 – I was 15 years old,” he says.

Ahmed initially played popular Arabic songs and then flamenco music with a group of close friends. “We started what was called the Bahrain Flamenco Band, and we were quite lucky to get a slot to open the Bahrain International Music Festival in ‘98,” he says. “That was quite nerve-wracking – I was 16.”

Life took a slightly different turn after Ahmed graduated from university with a Bachelor’s degree in banking and finance. But even with a nine-year stint in the banking sector, he never stopped being a musician, saying: “I was living a double life – banker by day and a musician by night.” Unable to ignore his musical calling, he left the banking world in 2014, and hasn’t looked back since.

Juggling two hats, Ahmed performs solo under AQ’s Jazz Experience and also has his own group – Likwid, named after a club they used to play at. “I think those days definitely defined us as musicians, or made us grow into the musicians that we are today,” he adds. “Likwid is not jazz, per se. We don’t care about being categorised or playing a specific genre as much as playing good music.”

Ahmed has performed at various venues across the island – restaurants, hotels and music festivals, including the first Bahrain Jazz Festival and the Bahrain International Music Festival, amongst others.

“Likwid is our creative outlet,” he says. “It’s where we sit down, write our own music and compose our own songs. Our debut self-titled EP was released back in October 2016, to coincide with our performance at the Cairo Jazz Festival.”

Although Likwid’s genre is ‘alternative’, Ahmed’s own musical style resonates more with jazz. “I think what attracted me to jazz were its complexity and mainly its spirit – the musicians give each other space, time and freedom to express themselves,” he says. And when it comes to jazz vocalists, Ahmed believes that one requires a lot more skill to sing jazz as opposed to any other genre.

Apart from Ahmed’s parents, who’ve been his biggest supporters, he draws inspiration to create music from his personal experiences, as well as his idols, including Bahraini icon and percussionist – Mirza Al Sharif.

Ahmed regularly performs as a session player with the Bahrain Music Orchestra, and has recorded with various Arabic superstars including Rashed Al-Majed and Abdul Majeed Abdullah, saying: “I love the spirit of collaborating in general, and I think that is definitely the direction that musicians should take, because to stay in your own bubble nowadays just doesn’t work.”

In the process of finishing a second EP, Likwid recently performed at Saudi Arabia’s first jazz festival, and are gearing up for an upcoming Spring of Culture event, Likwid & Friends, on March 17. Ahmed also plans to put together a jazz project, which will feature a couple of his original compositions. Looking to the future, he says: “I hope to one day become Bahrain’s jazz ambassador to the world.”

Between rehearsals and jamming, he enjoys spending time with his family and his white Labrador, Candela, doing charity shows for the needy and animal welfare, and anything that takes him out to sea.