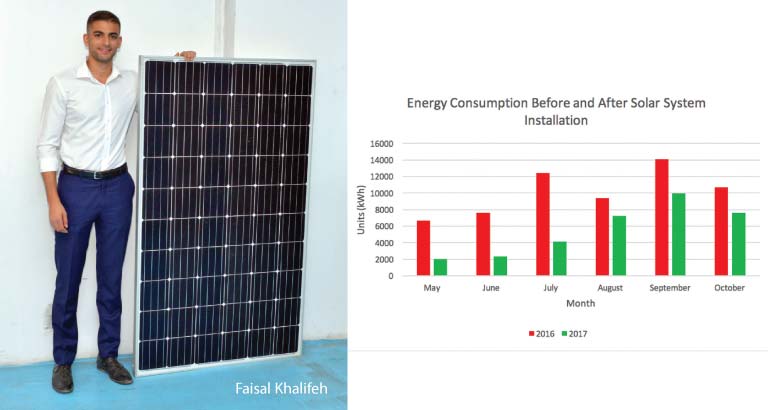 Renewable energy is the way of the future. Forward-thinking Faisal Khalifeh is making it a reality with his solar power enterprise, the first of its kind in Bahrain.

Twenty-five-year-old Faisal is as dynamic in his demeanour as in his business sense. He developed an interest in solar power during his time at the University of Toronto, where he took courses in system installation, system design, economics and environmental studies. “That’s where I first got interested in the subject,” says Faisal.

“After I graduated, I did courses on the side in solar energy, just out of my own interest. I wasn’t looking to pursue it. Then, when I moved back to Bahrain in 2015, I started looking at it as a possible business. At first, we wanted to bring the panels in from other countries and install them here. But we studied the feasibility of manufacturing and saw that we could do it and be competitive, quality and price-wise, so we just dove in.”

That leap and foresight resulted in Solar One, Faisal’s own company, which he founded with the support of his father. “It was something I was discussing with my father a lot,” he says. “Because we have the infrastructure and our family is an industrial family, he encouraged me to go towards manufacturing.”

Solar One became the first and only solar panel manufacturing facility in the Kingdom and recently won the Start-up of the Year category at the Bahrain Award for Entrepreneurship, in November 2017. Already expanding its business, Solar One aims to increase its current production of 60,000 solar panels to 90,000 panels by next year.  “The solar panels can be installed anywhere, including factories, warehouses, farms, offices and homes,” explains Faisal. “Anywhere that’s using electricity, you can use it. Our solar panels are fully customisable; we do different sizes, shapes and power capacities and even different colours.”

Obviously, solar energy offers many environmental benefits for the country and contributes towards combating global climate change. However, the average man also stands to gain from free and clean energy. “The Ministry of Electricity has just introduced net metering. So, if you install a system on your roof, any extra energy can be pumped back into the grid and you receive credit on your electricity bill,” explains Faisal.

With such advantages over conventional energy, one wonders why Bahrain has not tapped into solar energy sooner. “Electricity has always been so cheap compared to other countries,” says Faisal. “But electricity prices are rising and the government is also making a strong push now towards renewables as part of its economic development goals.”

Faisal is quick to credit the government with the support it provides to the development of renewable energy projects. “The government is doing a great job of setting its vision for the country and then introducing the right policies and giving people the tools they need to reach that vision,” says Faisal. “They’re backing up their talk and helping us to develop our business and the industry in Bahrain in many ways, which is really great.”

However, Faisal adds that it’s not been all plain sailing. “One of our main challenges was the lack of awareness,” he says. “It’s a completely new industry, so a lot of our meetings are educating the client on the benefits of solar energy versus the costs. Thankfully, with the ministry’s new policies and the introduction of net metering, it makes solar much more attractive.”

Faisal is optimistic for the future of solar power in Bahrain. “I think the residential solar sector will grow because people will see the same paybacks that companies are seeing,” he says. “In my own house, we’ve reduced our electricity consumption about 30 to 40 per cent, and we’re talking to real estate developers to see how we can add value to their properties by installing similar systems. We’ve also started working with the Ministry of Transportation and Telecommunication to develop a prototype solar system to power their advertising boards and lighting in bus shelters.”

Though he clearly has his hands full, Faisal still manages to find time for his hobbies. “Between the gym and football, I try to read whenever possible,” he says.