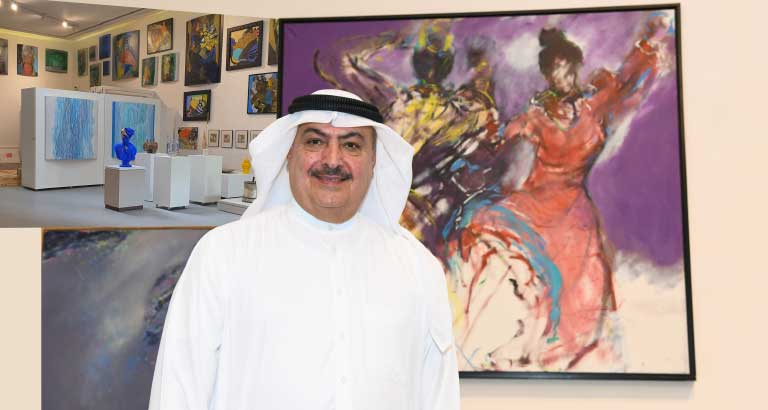 As we celebrate 25 years of Bahrain This Month, we speak to one of the most prolific artists in the Kingdom who has made tremendous contributions to Bahrain’s art scene - Chairman of Bahrain’s National Council for Arts and Honorary President of the Bahrain Arts Society, Shaikh Rashid bin Khalifa Al Khalifa. He takes us on a journey through his creative life, and shares his top priority in the interest of Bahrain’s budding artists.

Their vivid imagination and ability to create breathtaking works of art on a ‘canvas’ of their choice has made artists a subject of interest for the longest time. What people don’t always realise, though, is the sheer importance of art in our day-to-day lives. Think about the last time you took a moment to step back and marvel at a work of art. Did it invigorate your thoughts, make you experience a strong emotion, inspire you or perhaps provide you with a mental escape? It’s vital, isn’t it?

Bahrain’s art scene, too, has been a source of inspiration, and there’s no denying that one of the most inspiring Bahraini artists of our time is none other than Shaikh Rashid bin Khalifa Al Khalifa. His extensive artistic journey began more than 50 years ago when he held his first exhibition at the age of 18. Since then, he has been a part of more than 60 solo and group exhibitions, in Bahrain and across the world, at some of the most prestigious galleries.

With an extremely proactive approach, Shaikh Rashid is undeniably a champion of the arts movement in Bahrain having made several efforts to grow and develop the art scene, including the development of the picturesque RAK Art Foundation in Riffa.

WHERE IT ALL STARTED
Like most people, it was when Shaikh Rashid was in school that he realised his talent was appreciated. “Our teachers would ask us to paint, and on seeing my paintings I was told to persevere by them and my family,” he says.

Soon after, Shaikh Rashid participated in a school art exhibition which was attended by the then Amir of Bahrain, HH the late Shaikh Isa bin Hamad Al Khalifa and the former Prime Minister, HRH the late Khalifa bin Salman Al Khalifa. “They tapped me on the shoulder and said ‘Carry on.’ When two of the most important figures in the country attend a school exhibition, approach a youngster and say to him ‘Carry on,’ you carry on,” he says. “Having their appreciation was extremely encouraging.”

He was soon awarded a scholarship by HRH the late Shaikh Isa to pursue his art education in the UK – a gesture which helped him pursue his career. As the years went by, and with each successful exhibition, Shaikh Rashid attained a high profile in the international art scene.

Speaking about the most memorable of his stellar achievements, he says: “In 1994, the Bahrain Art Society had an exhibition which was inaugurated by HRH the Duchess of Kent which was very special. Then in 1986 or 1987 we participated at London’s Saatchi gallery. In fact, Mrs. Saatchi came to one of our exhibitions which was in 1993. More recently, in 2018, I had a solo exhibition at Saatchi Gallery in London which was a very big thing for me.”

FINDING INSPIRATION
At the time when he first started, Shaikh Rashid considered the hazy paintings of the famous 18th century British artist, William Turner, to be some of his favourites. He interpreted the foggy and smoky depictions of sceneries to be more like the sandstorms and heat here.

As for inspirational local artists, Shaikh Rashid views the late Dr. Ahmed Baqer, the late Karim Bostar, Karim Orayedh and other artists as peers that he looks up to, mentioning that they have somehow guided his career forward. “Regionally, we have artists from Egypt and other countries such as Diya Azzawi from Iraq and Nasser Al Riffai who were all sort of an inspiration for young artists in the region,” he says.

“I believe you must have inspiration all the time, otherwise you just become a closed box. The air that we breathe, what we see around us, what we hear - this all gives one inspiration to make art,” he says.

Shaikh Rashid also has an avid interest in design, interior design and architecture as he finds it to involve more than painting and be positively challenging. “The things that inspire us includes activities around us, sceneries and the use of materials. Since I do design, I find that materials also give you a different approach to implementation. For instance, when I did the convex versions, I initially started with canvas stretched on timber and moved on to aluminium as I found it to more robust, flexible and related to the design,” he explains.

“With materials, one leads to another. So, you need inspiration you need to always think out of the box - how to improve and how to create new artworks,” he adds.

BAHRAIN’S ART SCENE
As a founding member and Honorary President of Bahrain Arts Society, Shaikh Rashid has identified several talented artists in Bahrain. “I see the artworks of prolific talent in Bahrain being exhibited at the Annual Fine Art exhibitions and follow them on Instagram. Many of them are extremely talented; we just need the opportunities for them to progress even further, whether it be through regional or international participation,” he says.

One of the key observations that Shaikh Rashid has made over the years is that more women are entering the art scene leading to a growing interest in Bahrain’s art movement and a consequential increase in attendance at exhibitions.

Shaikh Rashid was also at the helm of developing the stunning RAK Art Foundation, which has grown to be a source of inspiration for artists and art enthusiasts alike. “When I first acquired my family home in Riffa, my first intention was to preserve it. However, when we converted it into an art foundation, what came to my mind was our goal to promote art aside from emerging and established artists in Bahrain. This was in addition to educating and showing the importance of art in our society. You need to appreciate art; it is all around us... we just need to preserve it and show it correctly.”

THE DREAM – A LEAP FORWARD

Sharing his thoughts on being named the Chairman of the newly established National Council for Arts, Shaikh Rashid says: “I am thankful to His Majesty King Hamad who trusted us to be in this council. I hope we can achieve what we have in mind for Bahrain, our top priority which has to do with arts education.”

While art programmes currently available at schools in Bahrain are considered to be good, Shaikh Rashid states that there isn’t a dedicated body for teaching arts for school graduates. “Hence, we need a proper college that artists can go to. We have wanted this body to be set up for a long time, so I hope that we can collaborate with relevant institutions to establish this for future artists,” he says. 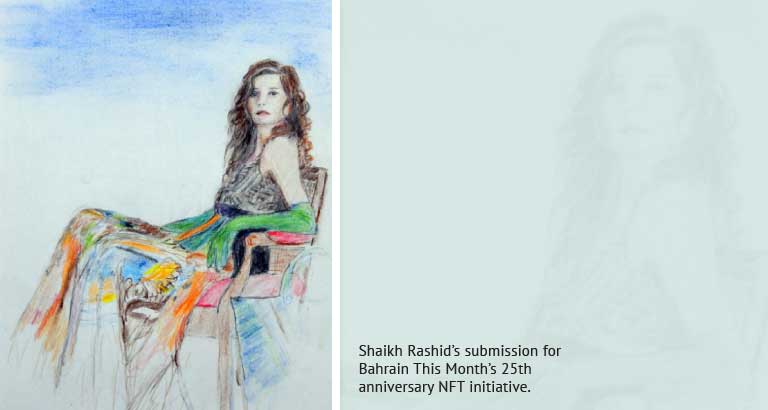 Speaking about his main aspirations for Bahrain’s art scene he concludes: “I want to see an art college in Bahrain. Let’s push for it. That’s number one because this has been my dream for a very long time. Then of course, to have art and artists in Bahrain and watch them achieve an international level and be exhibited somewhere, not only in Bahrain, as they deserve to be abroad.”