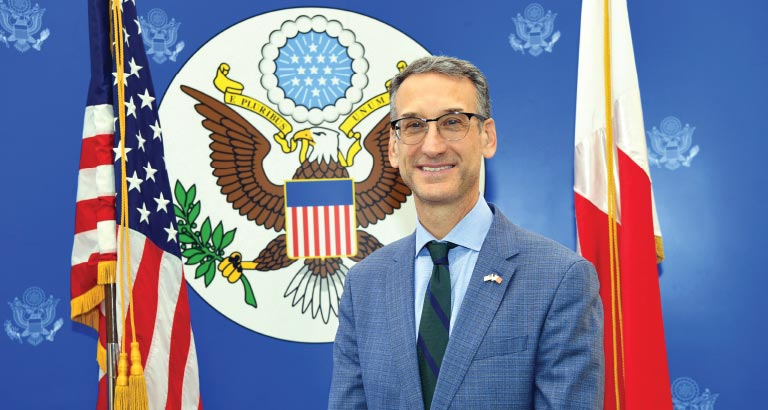 US Ambassador to the Kingdom of Bahrain, His Excellency Steven C. Bondy, speaks to Bahrain This Month about his objectives as ambassador, the cooperation between the two countries with regards to regional maritime security, and more.

Your Excellency, can you give us a brief summary of your career to date?
First and foremost, I am honoured to be serving as the United States ambassador to the Kingdom of Bahrain. This is the culmination of a decades long career, and there is no place that I would rather be. There is nothing I would rather be doing than serving as the US ambassador in Bahrain. I have been with the diplomatic service of the United States for 31 years. In all of that time, my career has been focused on working in and on the issues of the broader Middle East. I had the great pleasure to serve in Bahrain earlier in 2004 to 2007 when I ran the Political and Economic Section here at the embassy. I’ve also served in other many other regional countries, including Iraq, Afghanistan, UAE, Turkey, Jordan, and Egypt.

You were confirmed as the US ambassador appointed to the Kingdom of Bahrain by the Senate in December 2021. What are your key observations during your time here?
Well, I’ve had the great pleasure to have visited every one of the Arab countries, and I can say with all truthfulness that Bahrain is the most welcoming place I’ve ever been. Perhaps it’s the tradition of engaging the outside world through trade and commerce, but I can say that Bahrainis are incredibly warm people. They have made my wife who is here with me, and I, feel like we are part of the community. During the month of Ramadan, we attended several events at Bahraini homes where we learned about cultures, traditions, and the religion and we just felt very much at home. I don’t want to compare Bahrain with other countries other than to say, this is where I am happy to be.

I’ve spoken about threats to our mutual national security. Of course, I’ll say straight out that the greatest threat is from Iran. So, we are working with our friends here in Bahrain, along with other countries in order to deter Iran from threatening countries in the region including our friends and our allies. That leads to another point, which is Bahrain’s historic and courageous decision to normalise its relationship with the state of Israel through the Abraham Accords. As you well know, Bahrain and Israel are two of our closest friends, allies and partners in the region and, here at the embassy we are doing everything we can in order to strengthen that relationship across the broad spectrum of activities, be it commercial, technological, educational health science, or harder subjects of military and security.

I’m also here to promote US-Bahrain trade and commercial relations as they’re underpinning the US Free Trade Agreement, in addition to promoting other civil society activities. And, of course, here at the embassy, we devote a lot of time, effort and energy to promoting people-to-people ties - that is the solid foundation upon which our governmental relations are built.

What are your thoughts regarding the US’ role in the 34-nation Bahrain-based Naval force? What have been some of the most significant achievements of the US Navy in terms of maritime protection, the war on drugs, etc.?
Truly Bahrain is the fundamental relationship the United States has in the region in order to patrol the maritime environment, ensure the safe transport of commercial shipping, and protect our friends and our allies our national security. Bahrain is the host of the Fifth Fleet, which is incredibly important, but in addition to hosting, Bahrain is an avid participant.

June is observed as Pride month worldwide. Last year, the US embassy hoisted the Pride flag at the embassy premises which proved to be very controversial. This year, the embassy has posted about Pride month on its official Instagram account garnering a similar reaction. What is the embassy’s stance on Pride month and the LGBTQ community in general?
Thank you for raising that question. I want to be very clear that we address LGBTQ rights as a part of our broader human rights strategy. Unfortunately, members of this community and their families to some degree have been marginalised and discriminated against throughout history, including in the United States. And so, this administration’s policy is very much to be proactive in protecting the equality of members of the LGBTQ community.

Let me just say also from a personal point of view, I have members of my family who are members of this community, and my guess is that almost everyone reading this also has family members that are part of this community. What we are seeking to do is ensure that these individuals feel comforted and feel safe and secure to know that the United States government and people support them. I also want to be very clear that we are not trying to change people’s minds from a religious, moral or ethical point of view. Rather, what we’re saying is, “These are colleagues. These are family members. These are friends. Let’s treat everyone with the respect that they deserve.”

Can you tell us about the US Navy’s recent introduction of a pilot mental healthcare programme? How necessary is this approach for the mental health and wellbeing of US military personnel deployed in Bahrain in particular?
As I’ve had the great honour to serve four years as a diplomat embedded in the United States military, what I can tell you is that the fast and high pace of deployments since 2001 have led to great stresses and strains within our forces. So, anything the United States military can do to address the pressures that service members are under, I’m going to support. Even more broadly here within our embassy, we ensure that our staff understand that the pressures that they feel being far from home are things that we want to address before they become big problems to ensure that our personnel know that there are professionals that they can reach out to at any time. I would say the same thing about all of your readers - encourage them to talk to anyone that they need to when they feel their burdens are becoming too heavy.

You’ve had several celebrated achievements during your career, which of these do you think has helped you most in your role as ambassador?
Well, I’ve been at this a long time, and I can say that every job that I’ve had, every step that I’ve taken has contributed to my ability to serve effectively as ambassador, but to pinpoint one particular thing that I am proud of; I happened to be serving in Jordan in 1994 when the late King Hussain decided to make peace with Israel, and I was involved in those negotiations and the culmination of the signing of that peace treaty. That’s why I am so happy to be here at this time with His Majesty’s courageous decision to make peace with Israel and HRH the Crown Prince and Prime Minister’s implementation of that decision. I see this as coming full circle in my career, and I want to do everything I can to ensure that the Bahraini government and Bahraini people see their normalisation of relations with Israel as a complete success.