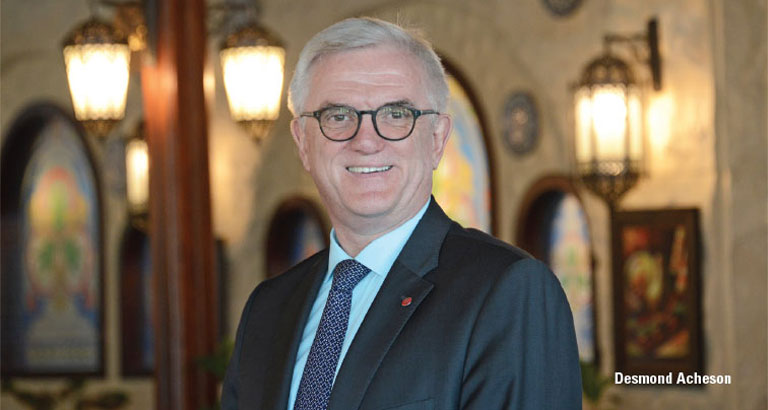 Canadian national Desmond Acheson is now at the helm of the property having recently taken over as general manager of Ramada Manama City Centre Bahrain.

Set in a prime location, the hotel boasts 140 sizeable rooms and suites, a spa, a gym, an authentic Reem Al Bawadi Levantine restaurant – with a patio and shisha terrace, more than 400 sq/m of meeting space with spectacular sea and city views, and an outdoor rooftop pool. In addition, a new westernthemed restaurant – called Patio – is opening in time for Eid Al Adha and will feature a stylish and funky menu with an ultimate focus on fresh home-made soup as well as excitingly innovative salads and sandwiches. In addition, a lobby lounge will also be launched in the near future.

Desmond explains “The location of the property is in the prime district of Seef, and in close proximity to the world class malls and the exhibition centre. The focus will be on local clientele for the food and beverage outlets, and on guests from Saudi Arabia, neighbouring Gulf countries and other nations around the world for the accommodation. We are very proud of the spacious and state-ofthe- art guest rooms. Now the critical ingredient is for us to train our team to provide consistently attentive personalised service, contrasting dining choices, superlative meeting experiences, and to make sure that we pay close attention to the local market. It is extremely important for us to become part, and a supporter, of our local community.”

Desmond has a world of experience in luxury hospitality, having worked with a host of innovative hotel companies across the globe. “I was educated in England and Northern Ireland, before I emigrated to Canada, where I worked for eight years,” he says.

“I have been very fortunate to have worked with industry pioneers in the luxury hospitality industry in North America, Europe, Asia, the Middle East and South Africa.” Although this is Desmond’s first time to work in the Gulf region, this dynamic hotelier is thrilled to be in Bahrain, as he builds on the experience he gained in his time in Egypt and other locations. “I loved the challenge and excitement that came as part-and-parcel of my job in Cairo, and I am excited to see what is in store for me here,” he adds.

Having been in Bahrain for just two months, he has found that the culture and cosmopolitan feel of the island is already growing on him. “From my initial impressions, Bahrain seems refreshingly mellow in comparison to Egypt, and people have a gentler approach when it comes to dealing with you. Everyone appears to have time for each other, which is a life skill and something that seems to be vanishing in many other parts of the world. So, this is very nice,” he says.

When it comes to tourism being a major player in Bahrain, Desmond says he feels very encouraged by the tourism infrastructure on the island and the evident interest of the Kingdom’s decision makers to develop Bahrain as a major destination. This involves promoting the island as an attractive and competitive location for specific events, be they cultural, architectural, fashion-related, artistic or sports, without forgetting the supreme importance of the oil and gas industry, as well as international finance. The hospitality industry is here to support and build on this, and will be the one to ultimately benefit from all this focus.

When asked what he considers to be the best-loved aspect of his career in the hotel and catering industry, he says: “Witnessing the victories of former colleagues and seeing the people with whom I’ve worked over the years moving up the career and corporate ladder is simply fantastic. I get such a kick out of thinking that I might have contributed in some part in their progress.”

In closing, Desmond says he hopes to spend many years in Bahrain to give Ramada Manama City Centre the recognition it deserves, saying: “I would love to be the person who can put this little gem of a hotel on the map, both as a professional hotelier, as well as for the parent company of the Wyndham Hotel Group and for the ownership company of Bukhowa Investments of Bahrain.”