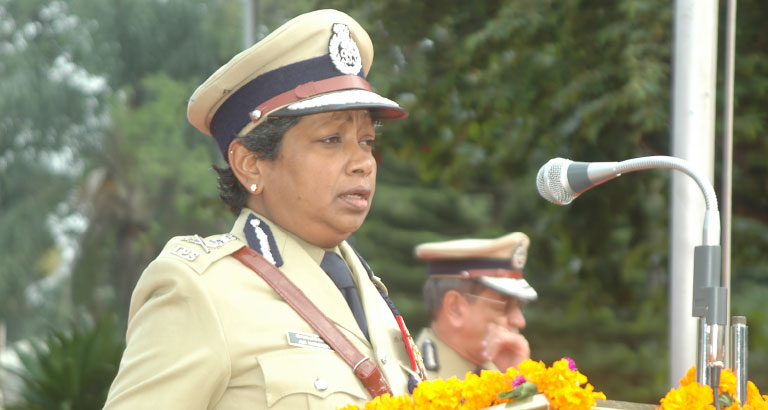 A true inspiration to all, Dr. Jija Madhavan Harisingh has had a prolific career which spans decades and industries. Her experience includes working in both, the public and private sectors. She has lived a colourful life and on a recent visit to Bahrain shared some of her invaluable insights with George Middleton.

Most notably, 36 years ago, she became the first woman Indian Police Service (IPS) officer in Karnataka, and since, her extensive and varied career ensued earning her several titles including artist, writer, and Director General of Police.

Dr. Jija, what was it like being the first woman in the Indian Police Service during the mid-80s and what has changed since then?
The majority of the challenges that I faced then are not being met by my colleagues now as subordinates have accepted women as IPS officers. When I first joined, people did not know how to address or even salute me – an issue that does not exist now. In addition, we didn’t have facilities for women, even for washing, but this has changed.

You have pursued a post-graduate degree in journalism. Have you followed this passion for writing outside of police work and would you consider authoring a book?
The journalism diploma was an evening programme which naturally provided me with the opportunity to write. My creative writing includes writing short stories, and I believe I have two or three books within me too. That being said, I have started writing a life story, but I wouldn’t want it to end up being a book that is too thick, too involved or one that gives away too many details, or is just some boring autobiography!

I’ve also started writing a children’s book aside from a book detailing my encounters with people for which I have written ten or 12 chapters. Let me get that out first and write about my more colourful police journey.

My favourite authors are Maya Angelou and the Vietnamese monk Thich Nhat Hanh. I am currently reading his book ‘Europa’ which received the Booker Prize from India. I also enjoy books about astrology and spirituality.

You completed your Ph.D. or thesis on women’s empowerment, doing a socio-economic study of women recruited into the police force in Karnataka. What was the most exciting finding in your research?
What was interesting in the study that I’d like to explore further is that women feel empowered in that they have been able to capture the agency, within the family, society, and the workplace, at all levels. Generally, they feel empowered and have been able to establish themselves in having a voice in economic affairs and areas which involves decisions making such as where to send their children to school, if they should go on holiday and where, how they should celebrate festivals, and what they should buy. In all those things, women have established themselves and their power of agency.

Does law enforcement need to get more involved with protecting women in India, or do you think that laws are in place now?
Law enforcement must be stricter; the police must be sensitive to victims. Sometimes you find that the constables themselves, let people get away.

I want to also talk about the ‘#Metoo’ movement in Hollywood. There have been similar instances with seniors and MPs who have admitted to doing similar things. In fact, I watched a documentary where a film director in India openly admitted to doing actresses favours in exchange for roles. “Of course, I sleep with the actresses. If they cooperate with me, I will give them jobs,” he said.  I couldn’t believe he admitted to this on camera in front of all these people. It was bizarre because that was before the ‘#Metoo’ movement exploded in the West.

Have you taken any particular delight in putting any specially privileged individual where he belongs - in jail?
I was an officer on deputation to a company; I went before the board for the selection committee for an interview, and the company’s chairman told me to call him. So many interviews are part of the hiring process, and I called him without even thinking about it. He had asked me to meet him at his hotel room and so I asked my colleague if he could spare his evening, and he agreed to come.

I asked my colleague to meet me at the hotel lobby and then called the chairman to let him know I was at the reception. He was frightened when he saw me with my colleague! You should have seen his face! (Laughs). I can’t say for sure that he had ill intentions, but it is something he was known for doing. He was always wary of me after that.

There was another extremely powerful guy high up in authority who went down for five to six years in jail for harassment where I was involved in the case.

I think harassment is so painful. It’s sad on a surface level, but on the inside when you’ve reported someone, you have the sweet fragrance of honey, knowing that you’ve done the right thing.

What advice would you have for women today who may also go into a traditionally male-based work environment? Is it more accessible now than it was 36 years ago?
It is slightly more accessible, but India is not a uniform, small country; it has 1.4 billion people. So, the culture is not uniform, the education level is not consistent, and it all depends on the area; in some places, it is backward while in other cities, it is forward, and women will face challenges depending on where they might be based or living. Wife beatings are still prevalent in India; there are high rates of suicides among women. No conclusive research shows that you will be free from these issues if you are more educated.

You’ve exhibited your art all over the world. What was your most exhilarating experience as an artist?
I had started my journey with painting in India. At some point, I was sent to Australia for a course in Change Management at a university outside Sydney for four months. Once, when everyone had gone home for the weekend, and I was alone, I started painting. Then, one artist and the director of the local museum were passing by; they paused, looked at my artwork, and said, “Would you like to have an exhibition?”. I was leaving for India in a month, so they went to the state gallery, and an exhibition hall was created for me. This hall, where I had my solo show ‘Indian Magic’ now has a three-year waiting list.

Over the years, I’ve had to re-evaluate the price of my paintings, as I did not want to sell them for exorbitant fees, I tried to sell them and make them affordable so people could buy them.

Where do you find the time to focus on so many things and excel at them? What is your secret?
It’s about managing your time, structuring your time, prioritising, and working, and then you can achieve a lot. I do so much work at night. My watch says I slept last night for three hours and 31 minutes. (Laughs)

Do you have any goals left?
Yes, I want to get into nutritional security in my country, which focuses on ensuring that people have access to safe and secure soil that is free from pesticides and that the same type of people don’t control this part of the economy.

What do you think lies in the future for you?
I feel I’m a self-reliant person as I don’t live for the approval or disapproval of others. I only need my approval and ask myself: “Have I learned something new today? Have I done enough?”.
I don’t have significant plans for myself.