A Man of Steel 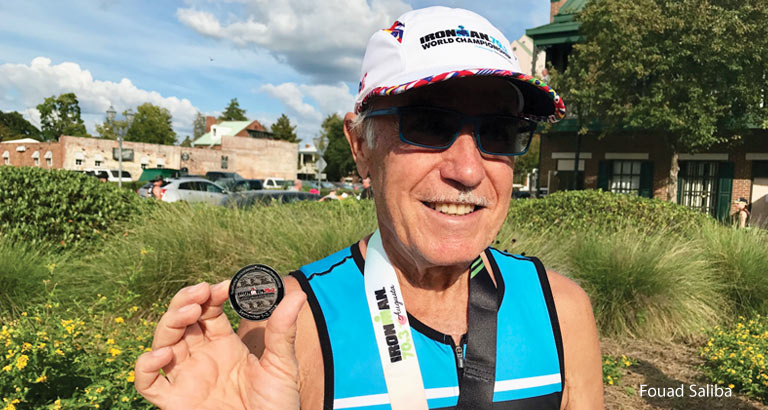 Fouad Saliba’s love of running was first born on a chilly spring morning in Canada in 2001 whilst accompanying his wife to a race. “It was so cold that morning that I signed up last minute thinking five kilometres isn’t too long and would still be better than standing still freezing in the cold,” he says. Wearing street clothes and without any training, Fouad went on to finish his first race in just under 40 minutes.

Spurred on by his experience, it wasn’t long before Fouad was training and participating in full and half marathons, as well as shorter distance races. His first marathon was in Chicago in 2003 and he has since gone on to participate in 15 others, including Boston, London, Berlin, Stockholm and Dubai. “I am continuously striving to outperform myself, testing my limits and raising the bar higher, race after race,” he says.

In recent years his focus has turned to triathlons. “My history with triathlons dates back to 2012 when I was 66,” he says. “I started off with short sprints and Olympic-distance triathlons, eventually my wife suggested I should try a half Ironman.” Accepting the challenge, Fouad went on to finish his first 70.3 Ironman in Augusta in 2015 – a physically gruelling competition that requires contestants to swim 1.9km, cycle 90km and run 21.1km.

Despite his age, in the two years since his first half Ironman, Fouad has successfully completed 33 races in various running and triathlon distances and is showing no signs of slowing down. “I am getting stronger and stronger and I am more motivated than ever to keep racing and achieving,” he says. This determination was on full show this year at the 70.3 Ironman event at Punta del Este, Uruguay. Despite suffering an accident prior to the race, Fouad went on to finish first in the age 70-74 category, ahead of his competitor by 16 minutes and 52 seconds. He also achieved a personal best finish time of 6:49:16 and with the result secured the status of All World Athlete Gold, cementing his position in the top one per cent of his age group worldwide, for the second consecutive year. 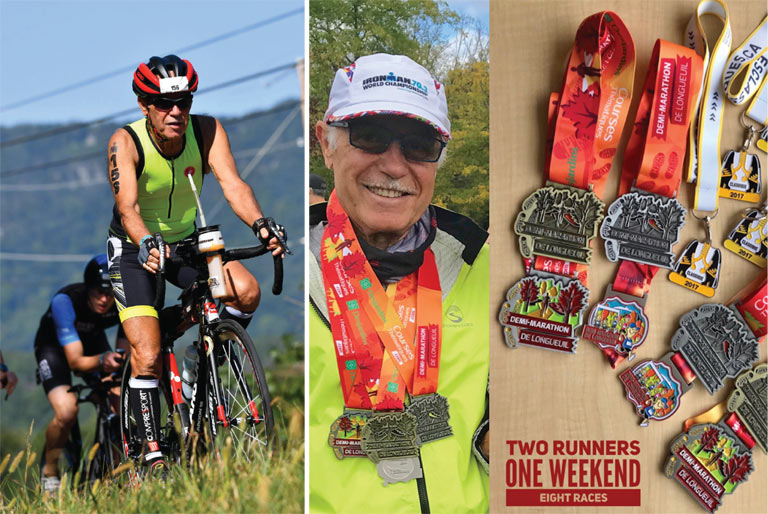 When listening to Fouad, it’s clear that his motivation for running and racing has been born out of a pure, simple joy for the sport. “There is something about running you can only understand and appreciate once you start,” he explains. “I consider endurance racing to be the best remedy for aging – when you race, you have a goal and a finish line; as you get older, you need such targets to keep you alert, focused and motivated.”

A civil engineer by profession, Fouad, a Lebanese-Canadian naturalised Bahraini father of three, has lived most of his life on the island and is coached by his wife, Myrna. A highly qualified professional in the field of sports, Myrna has been by Fouad’s side throughout his journey, helping him overcome the hurdles and mental struggles of racing and providing inspiration during challenging times. “I learned a lot from her, and I am grateful for her patience with me and how she always builds my confidence and believes in me, even when I doubt myself,” he says. “When I tell her she takes full credit for my success, she says ‘the credit is yours, you did the work, I just showed you the way’.”

Having spent the last three years touring the world and competing in various events at a rate of five to six 70.3 Ironman races per year, Fouad is almost continuously training. To ensure adequate recovery and avoid injury, Myrna has devised a personalised training regimen for him involving a variety of workouts that target all three triathlon disciplines. Perhaps surprisingly though, Fouad does not follow a strict diet. “Our daily food fits quite well with any athletic diet plan: a lot of vitamins and minerals from vegetables, fruits and nuts; lean protein, as well as healthy carbohydrates and fats to replenish energy,” he says. “I don’t think I would be eating any differently had I not been doing sport.”

The pair certainly seem to make a successful team, as evidenced by Fouad’s outstanding performances in recent years, including three qualifying slots earned by his own merit for the 70.3 Ironman World Championship in 2016, 2017 and 2018. And although his finishing times would typically be considered below average, when adjusted for age his performances would actually rank him way ahead of many younger competitors. “People who think the elderly are slow are oblivious to the fact that age and performance are negatively correlated,” explains Fouad. “My wife and I used to struggle with the idea that we are always in the lower quarter percentile of race finishers; today we prefer to think we are the fastest of everyone our age who is chilling out at home not competing.”

It’s unfortunate that Fouad and others his age are not well served by the Ironman one-size-fits-all rule that dictates the same cut-off time for all age groups, whether 20 or 80 years old. Through their courage and dedication, elderly triathletes, such as Fouad, are changing the sport and creating new demographics that need to be accommodated. “Ironman is a wonderful brand and perhaps the Rolls-Royce of triathlon long distance racing, but the system is less than perfect, and somewhat non-intentionally discriminating,” says Fouad. “I hope Ironman can consider implementing gender and age group appropriate cut-off times. It is only logical, fair and equitable for all.”

As he begins his preparations for the 70.3 Ironman World Championship in South Africa from January 2018, Fouad has some advice for other seniors who want to get into an active sport: “Do it without any fear! It is never too late; you can start at any age,” he says. “You just need to do it carefully and gradually, and always listen to your body. There are people who are participating in half and full Ironman races well into their 80s.”

And although clearly passionate about his racing, when he finally gets the chance to slow down Fouad also enjoys spending time with his children and grandchildren. “I am very attached to them, they are my elixir of life and a very special part of me,” he says. “I also like to explore the world and learn about different cultures – it’s an enriching experience and an eye-opener to the problems around us. It makes us appreciate more what we have.”

An inspiration to many, young and old, Fouad believes in never giving up and in surrounding oneself with positive energy. He epitomises author Rikki Rogers words: “Strength doesn’t come from what you can do. It comes from overcoming the things you once thought you couldn’t do.”