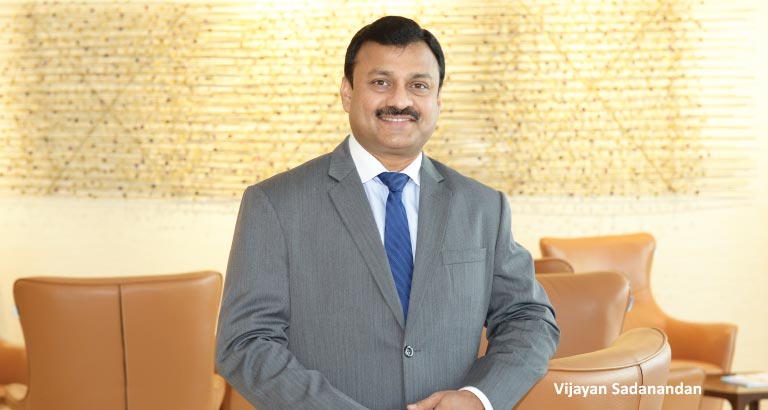 With 117 rooms and suites split over five categories from Premium doubles to Deluxe suites, The Arch, which is part of the Best Western Signature Collection and operated by Sahara for Tourism Co, had its soft opening at the beginning of July, and is already making its mark on the Juffair hospitality scene.

“We have a lot of facilities that set us apart from the rest, such as iPod docks and single-serve Nespresso brewers in the rooms,” says Vijayan, a hospitality veteran who started his career with Marriott Renaissance in India and was in Bahrain from 2002 to 2011 working with such well-known names as the Ramee Group, where he was instrumental is setting up several outlets before relocating to Dubai and later Fujairah for the pre-opening of a large hotel.

He tells me: “My primary passion is food and beverage and I’m very team oriented. I believe in great team work and hands-on floor ops. All the team members have been hand-picked and I give great importance to innovation and creativity across all areas of operations. I’ve always believed that ideas have to come from my ground staff, so, when we implement them, people feel motivated. They come up with ideas that are different because they are with the guests day by day and react to guest feedback.”

Vijayan is also passionate about, and has an in-depth knowledge of, e-commerce, virtual space and social marketing, which he says have been vital in promoting the unique outlets the hotel now boasts such as the TexMex Lounge which will have the Kingdom’s only country band complete with Texan singer.

There’s also the classy Club 11 (E11even) run by Manchester club veteran Ian, himself a DJ and all-round entertainer, with resident DJs Mishka, from the US, and MC Dollars, from the UK. Ian will also be overseeing the hotel’s classic pub venue, Fizz, which as well as offering the best in British and American bar food, has, probably, the island’s biggest HD screen – a massive 15sq/m!

Vijayan adds: “One area in the hotel that every visitor must check out is the Sol Café all-day-dining outlet. Its futuristic design is something that’s really making waves; we believe we have the best interiors in the whole of Juffair – and the best buffet.

“And then there’s the Posh Lounge – an Oriental club with a Far Eastern live band serving Oriental food – I believe this is the biggest club of its kind.”

As well as the impressive food and beverage offering, of which Vijayan is justifiably proud, there are plenty of other attractions for guests to enjoy. For the business traveller, there are two meeting rooms with the latest audio-visual facilities, a business centre with high-speed Internet and secretarial services.

The upcoming Cristal Hall will be an elegant banqueting space which can accommodate up to 120 guests for conferences, cocktail receptions, etc. And visitors are also well-served on the leisure front with a fully equipped health club and gym, with a sauna, pool and boutique spa offering a range of Asian aromatherapy treatments, among others.

Vijayan hopes to make inroads into the corporate sector as well as oil and gas and military visitors and says he is helped in his task by the eye-catching look of the property. “It’s a beautiful structure and very iconic, so by default it attracts people because of the structure, and it’s already doing well because of the great team we have on board.”

My primary passion is food and beverage and I’m very team oriented.”