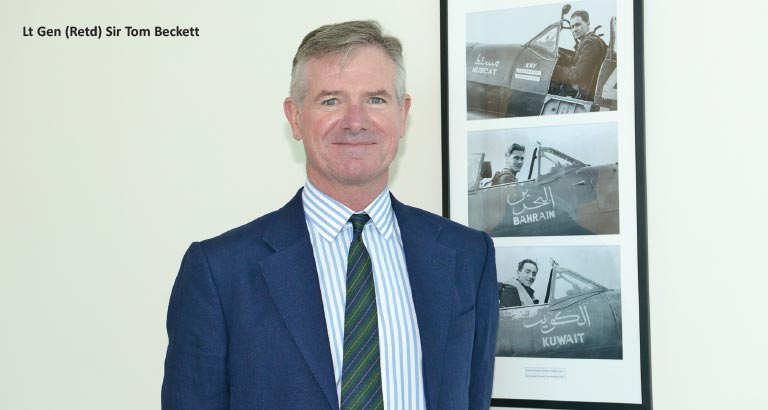 As Middle East head of the International Institute for Strategic Studies (IISS), Lt Gen (Retd) Sir Tom Beckett is a seriously influential figure on both the military and political scenes, not to mention the man charged with running the Manama Dialogue. He told Liz O’Reilly about his journey thus far and what he sees as the most important threats facing the region.

I think, from my early teens, I was attracted to the idea of being a soldier and was interested in military history.”

Moving to Bahrain to take up the role of Executive Director IISS Middle East was something of a homecoming for the former British soldier. He explains: “I was born in Awali Hospital [his father was General Manager Refining of Bapco]. In those days, Bapco ran the Awali school, which took children up to 11. Then pretty much all of us went to boarding school. But I lived here, in the holidays, until I went to university.”

And, like many others, that early experience gave Sir Tom a lasting affection for the island. “There is actually a Facebook group for Awali teenagers, it’s for children who grew up here in the ‘50s, ‘60s, ‘70s and ‘80s and there’s a reunion coming up – there are about 150 coming back and being hosted by Bapco.

“That’s indicative of how fondly people remember their childhood here in Bahrain. It was a great place to grow up, so unspoiled.”

From university, Sir Tom decided to join the British Army saying: “I think, from my early teens, I was attracted to the idea of being a soldier and was interested in military history. There was a paper element plus the outdoors, which seemed ideal. I went to Sandhurst in 1984 and planned for a short-service commission – three to five years.

“In the military, you change jobs every two years or so. I enjoyed every job that I did and that’s what kept me going – turning a three-year stint into a 34-year career. The low point, of course, was when soldiers under my command were killed but it’s part of being in the military; you put yourself in harm’s way. But there were also a lot of highs.

“I did four tours in Iraq and, having grown up in the region, I had a reasonable understanding of the area. That led to my final appointment as DSAME – Defence Senior Advisor to the Middle East and North Africa – covering from Rabat to Muscat and visiting all points across the region, including Bahrain, four or five times a year.

“Essentially, because the UK has significant interests in the GCC and the wider region but, in reality, because familiarity matters.

“I was the advisor to the Secretary of State for Defence and the Chief of Defence Staff. As a senior officer visiting on their behalf to have bilateral discussions, finding out what our regional counterparts want, developing relations and reporting back to the UK on the feelings from the countries.”

Having obtained a Masters in security studies during his military career, Sir Tom became a member of IISS “because it’s a really good information source”. And, when his predecessor decided to go into academia, he asked to be kept in mind for the regional role. “I thought it might work well because of my background; in some ways it’s thinking about the same problems that I was looking at in my previous job, coming into a research institute that’s doing the same type of thing,” he explains.

Was the opportunity to return to Bahrain an influencing factor? “Absolutely!”

IISS is an international research institute that provides objective information on military, geopolitical and geo-economic developments that could lead to conflict. Now in its 61st year, it has its head office in London, with regional offices in Washington DC, Singapore and the Middle East office in Bahrain.

“We have a number of research programmes. The first is defence and military analysis – we do an annual book called the Military Balance, which charts what 173 countries have as their military capabilities. When it was first printed it was just an 11-page pamphlet listing the military capabilities of the Warsaw Pact and NATO. Now it is a book 520 pages long. The information is based on rigorous, in-depth open-source analysis drawing on, for example, imagery to identify what each country’s holdings are. Some countries are open about their military arsenals, others aren’t, so it is painstaking work.” says Sir Tom.

“Military Balance-plus is the book’s online resource, regularly updated, which looks at trends in defence spending and procurement. Other programmes are Conflict, Security and Development and Non-Proliferation and Nuclear Policy.

“We also look at geo-economics, geopolitics and strategy because money and conflict are linked. You have to look at where the money is going to see if it might cause conflicts.  For example, we have a large piece of work examining China’s Belt and Road Initiative.

“Cyber security is a critical part of conflict and conflict avoidance. Military Balance lists hardware and personnel but we now have a programme working out how to describe and list cyber capability.

“IISS is not an academic institute. We are a strategic-studies research institute. Our audience is governments, businesses, the media and experts across the world. Our goal is to provide facts and analysis that have policy relevance for our audience in the pursuit of international peace and security.”

As part of this role IISS organises two annual dialogues – Manama and Shangri La, in Singapore. Their function is to bring people together to discuss important strategic issues and attendees include international heads of state, cabinet ministers, defence chiefs and national security advisors, etc.

“Last year the keynote speech was by His Majesty King Abdullah II ibn Al Hussein of Jordan in which he focused on the ongoing and central importance of the Palestinian–Israeli Peace Process which is an important issue for Jordan, and the region,” says Sir Tom.

“We also had the, then, US Secretary of State Mattis, who explained the US strategy for the region, and the Minister of Foreign Affairs from Saudi who, among other things, answered questions about the murder of Jamal Khashoggi.

“The Dialogue started on Friday and, on the Thursday, [Israeli PM] Netanyahu was in Oman and then Yusuf bin Alawi, Omani Foreign Minister, came and spoke about that visit. The dialogue is a great opportunity for countries to present their policies, but they also have to take questions on them.

“Credit must be paid to the Government of Bahrain. We, the IISS, invite the speakers and delegates but I know that many come because of Bahrain’s soft power, as a convener of discussion. For example, a Minister of Foreign Affairs, in one weekend, can have bilateral discussions with six or seven other foreign ministers, something that could otherwise take months to achieve.

“The same is true for businesses. They are given the opportunity for high-level meetings. One of our corporate members is a defence contractor who said that in the weekend they would achieve the same number of meetings as in six months [outside of the event].

“The other thing that was really good last year was that His Majesty, King Hamad, invited the key delegates to a dinner. On the Friday, His Royal Highness The Crown Prince hosted the delegates for dinner. That combination makes it a phenomenal event and I’m proud of being able to contribute, being able to bring together people to talk about the most important issues of the day.”

As Executive Director Middle East, Sir Tom leads a research team and also contributes to that research. The Middle East office operations team puts on an event each month. For example, concentrating on cyber security, on the sidelines of which the visiting expert spoke with many parts of the Government of Bahrain.

“Because it’s such a big event, the team from London comes out to help run it but everything else is done locally. As soon as one Manama Dialogue is finished, we start working on the next one! This year will be November 22-24. We are issuing speaker invitations now and it will be non-stop from here on in.

“The event is wonderfully supported by the Bahrain Government. When you bring in ministers et cetera, it’s a security issue. The government wants it to succeed – you can’t run an event like this without the support of the host government. I suspect that there is probably only one country in the GCC in which a truly independent think-tank, such as IISS, could operate, and I’m delighted we are based in it! Bahrain facilitates constructive challenge and debate. As an independent think tank, hosting the region’s most important security summit, I cannot think of a better country than Bahrain.”

For the future, Sir Tom believes the region is facing difficult times. He says: “In a nutshell, there are two main threats – extremism and Iran, which also includes an extremist element. The region is going to have to consider how it contains and reduces these threats.

“We, as an Institute, will apply our expertise to help determine policy-relevant approaches. Sometimes our analysis and recommendations will be popular at other times people may find them uncomfortable reading, but that’s the value of independent-of-government research.” 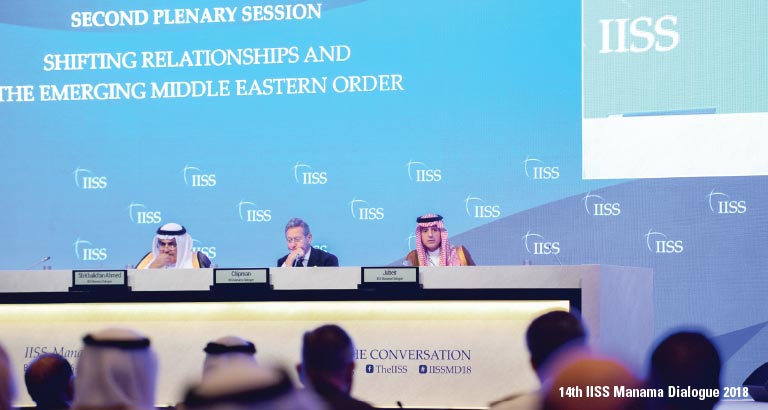