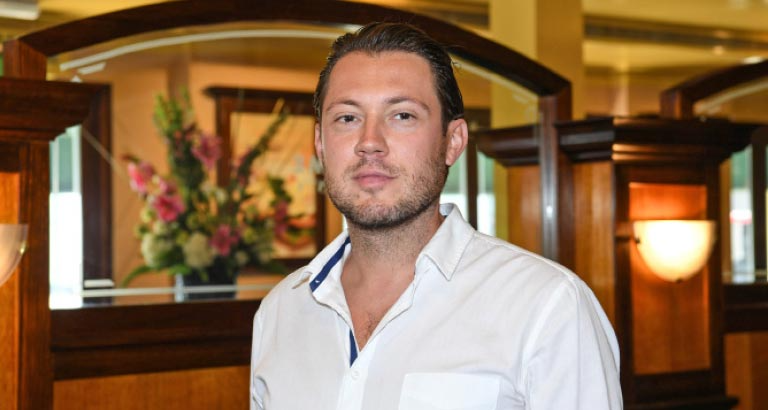 Life has undoubtedly changed dramatically in the past couple of years, with focus shifting to digital transactions and e-commerce. One German entrepreneur has settled in the Kingdom to empower small businesses to transition and grow in this new economic environment.

Sebastian Wussler has a storied history in digital platforms, none more impressive than his latest creation Hoodly, which was conceived in Bahrain last year during the height of the COVID-19 pandemic.

“The genesis of Hoodly came during the period of strictest COVID-19 regulations last year,” Sebastian explained. “Certain restaurants didn’t have a delivery platform but then found themselves needing to have one so that they could sustain their business with indoor dining obviously not an option.

“These outlets weren’t on apps such as Talabat here in Bahrain, or equivalent services in Europe and the wider Gulf region. It takes several weeks to be approved on those apps, and not only that, but it’s hard for smaller restaurants to be seen over the traditional giants.

Hence, Sebastian had an idea to create a software that would allow every restaurant to have their own takeaway store online within five minutes. This was developed over a couple of weeks and managed to get a great response in a very short time.

“We quickly began to realise that not only restaurants were using it but fashion stores too, and so Hoodly grew to allow you to create any type of commerce outlet, whether that’s takeaway and delivery, click and collect for goods and anything else within reason,” he says.

Hoodly has already branched out to Europe, East Africa and the Middle East with a presence in Saudi Arabia, UAE, Oman and Yemen. “I must also take the time to thank my partner and co-founder Kaushal Singh, who is one of the most intelligent people I know and I couldn’t have done it without him,’ he added.

Sebastian decided to settle in Bahrain after first visiting for food events in late 2019. After one particular event at Mahonia Restaurant and Lounge featuring one of the world’s most renowned chefs from Hong Kong and after revisiting the Kingdom, he noticed a gap in the market, with the Middle East yet to fully embrace the idea of e-commerce.

Hoodly is not Sebastian’s first success. He has a restaurant background with a family business of 50 years spanning three generations.

He explained: “I am proud of my background, but admittedly at 21 I decided that I didn’t want that to be ‘it’. I wanted to discover the world and went to South Africa to learn English and improve myself. I met my now ex-wife and mother of my beautiful daughter, but unfortunately my mother fell ill with cancer in 2007 and as the eldest son I came back to support the restaurant.

“Despite this, I had to find a way to make more money to visit friends and family so I started a platform similar to Airbnb for South Africa, called NewCapeTown. Since there was increased tourism in the area and a huge focus on the 2010 World Cup, we ended up with 1,250 guest houses and boutique hotels on the app for people to stay in. Not only that, but we developed it further to include a city guide with tourist information such as restaurant recommendations.”

After the World Cup, Twitter exploded worldwide and Sebastian decided to create a similar platform called ChefsTalk, where guests could interact with chefs directly. A decade later, 180,000 chefs use the platform and it boasts two million followers on Instagram.

Now, his focus is on growing Hoodly but the ideas don’t stop there.