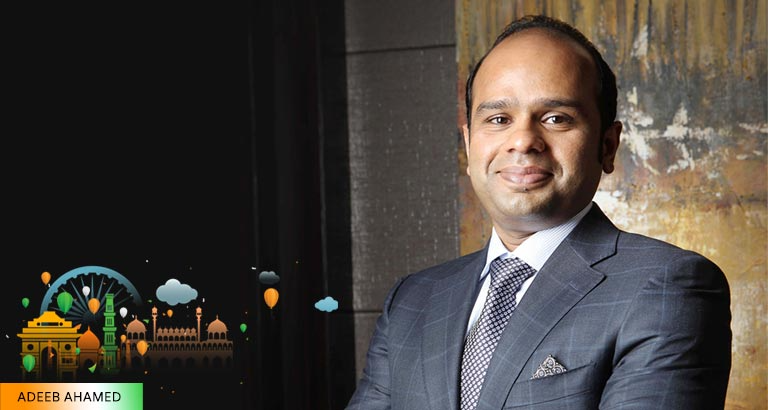 We get to know Adeeb Ahamed, Managing Director of LuLu Financial Group.

Adeeb Ahamed is a multifaceted professional spearheading LuLu Financial Group, Tablez and Twenty14 Holdings, which operate businesses across the financial services, organised retail and hospitality sectors. Mr. Ahamed also serves as a board member of the LuLu Group International.

His business acumen, tailor-made strategies, and entrepreneurial prowess have helped him elevate his standing in Bahrain, where the LuLu Financial Group operates a network of 14 branches and digital payment solutions under the trademark LuLu International Exchange.

Adeeb‘s growing influence as an engaging business leader has also earned him a position on the senior advisory board of the South Asia Regional Strategy Group (RSG) at the World Economic Forum (WEF). The invitation-only flagship group and its members are committed to the shared mission of accelerating the regional transformation of South Asia through public-private cooperation. The RSG provides strategic guidance on the forum’s regional agenda and is the highest-level decision-making body for the WEF’s activities in South Asia.

Beyond his persona as a visionary leader and insightful entrepreneur, Mr. Ahamed is a socially responsible philanthropist. He actively contributes to public service activities focused on education, healthcare and geriatric support, and was involved in providing relief support to the people of Bahrain during the peak of the COVID-19 health crisis in 2020.

As a visionary entrepreneur, he has a consistent and stable growth path that continues to impress his peers and industry influencers. He was recently listed by Forbes in their annual ‘Top Indian Business Leaders in the Middle East’.

LuLu International Exchange, headed by Mr. Ahamed won the Qadat Al Tagheer Award for Excellence in Financial Sector at UIEF 2016 and Financial Institution of the Year at the 2014 Arabian Business Kuwait Awards.