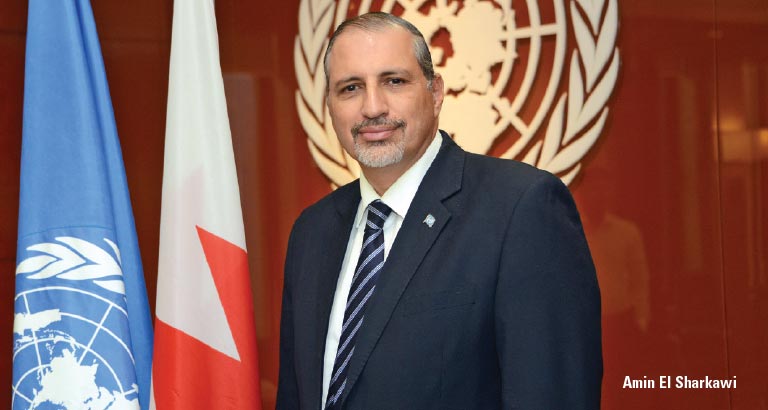 Although a global organisation, the work of the UN is mostly done locally while also being the custodian of international norms and standards. The UN first opened its offices in Bahrain in 1978 and has been a consistent partner ever since, helping the country in achieving its national priorities and addressing its challenges.

Amin has been at the UN for over 25 years, with previous tenures in New York, Syria, Libya, Sudan, Egypt, Tunisia and Yemen. Appointed as resident coordinator in 2016, he acts as an advocate for the UN and is tasked with supporting the work of its agencies in the country.  “It’s my responsibility to support the work and project delivery of the 16 UN agencies covering Bahrain, in line with the priorities of the government,” he says. 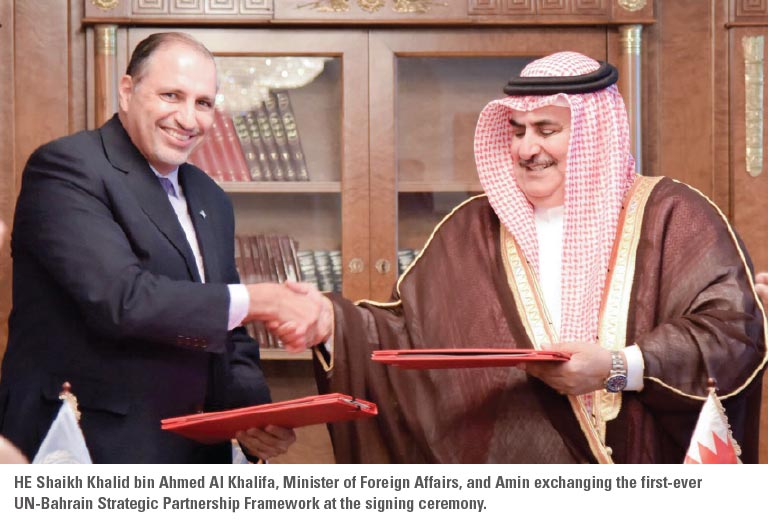 Amin is also the head of one of its resident agencies – UNDP – which aims to increase the country’s development potential. “UNDP helps Bahrain in strengthening its national institutions, supporting social strategies, expanding economic, energy opportunities and advocacy for the Sustainable Development Goals [SDGs],” he says.

As an international organisation, partnerships are at the heart of the UN’s work. In ensuring that “no one is left behind”, the UN partners with numerous stakeholders in Bahrain, including government, civil society, private sector, academia, media, parliament, women and youth. “The UN is mandated to provide best knowledge, experience and technical assistance so that, over time, partners will no longer need the UN,” says Amin.

The UN’s partnership with Bahrain was reinforced recently with the signing of the Strategic Partnership Framework (SPF) 2018-2022, aligning the UN’s work with Bahrain’s development plans. “The SPF gives a bird’s eye view of our work here, ensuring seamless coordination and avoiding duplication of efforts,” explains Amin. The agreement also aligns the Kingdom’s plans with the global SDGs, adopted in 2015 to end poverty, protect the planet and ensure prosperity for all. “The SDGs are a wake-up call and I’m glad Bahrain has embraced them,” says Amin. “With its Vision 2030 commitment and the intention to incorporate the SDGs into the next Government Action Plan, I think Bahrain is very much on track.”

Speaking of his own goals for his tenure, Amin says: “I want to get young people talking about the SDGs, because ultimately they are the ones that will benefit from them. People under the age of 30 make up 60 per cent of the population. So, we work a lot with the Ministry of Youth and Sports Affairs and other partners to promote youth-focused development.” UNDP supported the ministry in putting together its first-ever National Youth Strategy and National Strategy for Persons with Disability.

The UN also works to encourage gender equality. “Bahrain has a positive track record in the advancement of women and is an example to the region, so we try to build upon this success,” says Amin. UN Women, the UN entity working to empower women, collaborates with the Supreme Council for Women and supported it in the implementation of its National Strategy for the Advancement of Bahraini Women.

Elaborating on a second aspiration of his, Amin points to the government’s National Energy Efficiency Action Plan and National Renewable Energy Action Plan. “If I can see the implementation of these plans during my tenure, then I can proudly say I contributed to the diversification of energy in Bahrain,” he says.

Although a relatively new resident in Bahrain, it’s clear that Amin has an affection for the island. “It’s a privilege to be serving Bahrain – a country that embraces diverse cultures, ideas and beliefs,” he says. “It’s also a business-friendly place and I hope to see much influx into the country as it implements the SDGs – this would be a win-win for businesses and the Kingdom.”