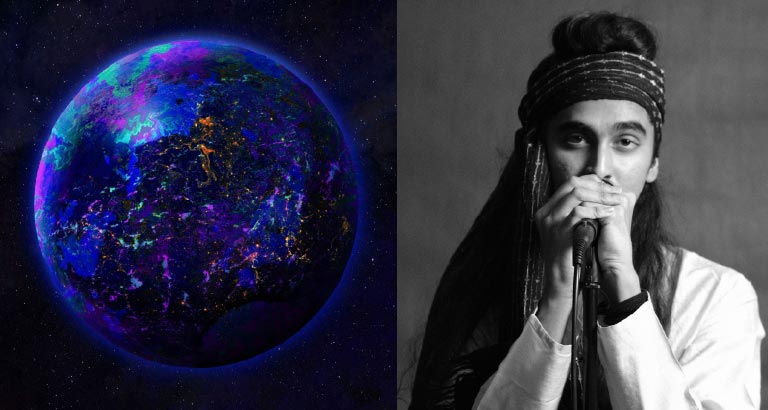 Renowned Bahrain-based musician, Ashwin ‘Xenai’ Shenoy’, talks about his journey with music with Farah Baig in this tell- all. From taking a leap of faith to overcoming a life-changing physical challenge, a consistent need for inner discovery and more - we find out what makes Xenai an interstellar musician.

For those that are familiar with the region, Bahrain has long been known to be a bustling hub for creatives. Visionary artists, exuberant designers and masterful musicians have graced the Kingdom with creative works that they have poured their heart and soul into – masterpieces that drive your own thoughts and resonate with your emotions too.

WHO IS XENAI?
Xenai ­– the name needs no introduction to most as this young musician has effectively mesmerised listeners in the Kingdom, and beyond, with his eclectic vibe and current sound with releases like Headphones and Walking on the Moon. “I would say my music is very much who I am as a person - the fact that I have a hard time finding where I come from and am also very distant from any particular cultural centre. I can’t say I’m either this or that,” he says, adding that growing up in Bahrain has also played a huge role when it comes to inspiration.

He strongly believes that the cultural fabric of the Kingdom influences his music. “We’re in such close proximity to each other it’s hard to not be exposed to one another’s culture, way of life and more. So, being in the centre of it all I always felt like a nomad or an alien… floating from one thing to another. I truly feel like my music reflects that,” he explains.

His new releases are to be celestial in nature – each song being a planet explored. “That’s why you’ll start to see my new releases are all going to be planets because every song is a different world I enter and I try to share that and bring people on a journey of inner discovery. That’s where Alien from Inner Space comes from,” he says.

HIS JOURNEY WITH MUSIC
“Music was always around me growing up,” he says. “My dad would play the keyboard and tablas at parties while my maternal grandfather played the veena and participated at competitions. Then there were my neighbours who played everything from rock to hip hop.”

Inspired and surrounded by music, Xenai soon found solace in the guitar at the age of thirteen. “I started to, almost naturally, excel at it. This was of course with the guidance of my teachers: Manny from Room2Rock and Ramil from Bahrain Music Institute. Everyone in my life played a huge role in my musical upbringing,” he beams.

Like most people, he reached a crossroad when it was time to go off to university. “I excelled at Physics and design and loved the idea of architecture or industrial design, so I applied to a bunch of schools and ended up getting offered scholarships, but something didn’t feel right,” he says.  “I knew in my gut that this wasn’t the path for me and told my parents I wanted to audition for Berklee and they freaked out.”

After changing their minds in his favour, Xenai applied to just one music college – Berklee. “I took a leap of faith and it worked out,” he says triumphantly of what would be a rollercoaster ride of his life.

“It’s unlike going to any other regular college. You eat, sleep and breathe music. Everything you talk about revolves around it and you never end the day when classes are done. You keep going till the late hours of the night either jamming, making music, practicing or going to recording sessions. Everyone was hungry to become the best,” he says. “It was competitive but there was a strong sense of community. We supported each other whenever we could. It definitely changed my life.”

THE BIG CHANGE
Taken in by the thriving musical environment, he never anticipated the challenge he would face next. “I started to get an intense pain in my right shoulder, neck and back which I thought was just a passing feeling but it progressively got worse. I tried hard to practice, keep up with assignments, recitals and more but it all started to drop away,” he says of the experience that soon had him consulting healthcare professionals. “They eventually came to the conclusion that this was doing more harm to me than good.”

“The guitar was my passion.  Imagine spending over 10 years on the instrument and giving it almost all your time. It being the whole reason I got into music and then have it taken away,” he says.

The experience left his mental health in a sorry state. “I was lost. It felt like I had no purpose anymore, but something amazing happened. I still wanted to create music and if I couldn’t play the guitar, I would find another way. I started making beats on my laptop, and writing my feelings on a notepad. It was completely out of my comfort zone but that was the birth of Xenai.”

THE NEXT STEP
Faced with adversity, he chose instead to grow as an artist and overall musician, perfecting his evolutionary talent. “Every instrument is the body part of the anatomy of music. That’s the way I see it. So, when I practice drums, I carry with me the knowledge of the other instruments and vice versa. Whatever I play only grows my knowledge of music, and keeping that intention in mind is what helps me perfect what I do,” he says.

“In other words, the music I make, drives me to play other instruments. At the end of the day, I’m a songwriter and my goals are to create and make an impact through what I release into the world,” he adds.

THE PLANETS ALIGN
In an exciting development, Xenai is currently collaborating with a Bahraini artist, Layan Raed, popularly known as @magnanimousbylayan on the social-networking platform Instagram. “As I mentioned earlier, my new releases will be planets as each track is a different world that I explore and share. We are creating these planets together.”

Each planet will also be listed as a digital asset known as Non-Fungible Tokens (NFTs) with unlockable content on OpenSea. “You are watching it unfold as I go. I have big plans for this and I can’t wait for everyone to see it and hopefully be a part of it. You could say I’m building a legacy but I’d call it a galaxy! Three of them are already listed publicly and are on sale as we speak. People can search for ‘Xenai’ on OpenSea if interested,” he explains.

Aside from the planet concept, Xenai is working on the music video for a recently released song 7amdillah which was a collaboration with Bahraini musician, May Alqasim. “Right now, I am also working with Angelina Soon from Pop Tarts studio and Anton Miraj from Miraj Media for my upcoming music video Ugly, which is being directed by Tarun Malhotra. This video definitely has a message and I have a strong feeling that it’s going to resonate with a lot of people.”

BAHRAIN’S MUSIC SCENE
Along the way, Xenai has met a multitude of talented musicians who continue to create original content and refuse to give up on their dreams despite the struggles. “That’s why it’s unfortunate to see that in terms of a music scene or industry, there isn’t one. There isn’t a foundation for local artists to thrive as musicians here, even more so for expats,” he says, highlighting the need for an infrastructure for the music scene.

“We need talent managers, agents, lawyers and laws to be passed by the government. We need support from our government to build an entertainment industry that spans across all genres including individual artists – not just the festivals and cultural music,” he says.

He stresses the need for creating an entity, with government support, that would ensure the fair treatment of musicians. “We need a musicians union so that musicians who go into the studio of a production house can never be under paid or taken for granted because at the end of the day this is a profession and people who take it seriously need to be taken seriously,” he says.

“This even goes for music producers who compose songs for advertisement agencies and companies. Companies using local talent to push their business need to pay these artists for giving their time and talent and there needs to be an entity to hold them accountable.”