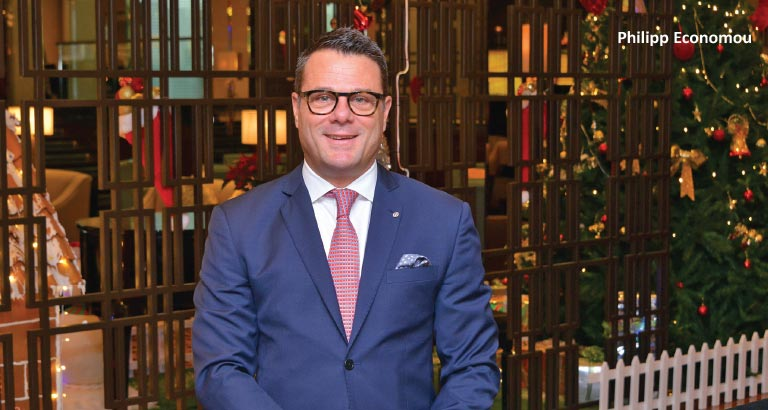 The new man at the helm of one of Bahrain’s oldest five-star hotels tells Liz O’Reilly he plans to play on the strengths of the Regency InterContinental.

A German national of Greek origin from a very cosmopolitan family, Philipp Economou was the first of his family to actually be brought up in Greece and it was in Athens that he started his hospitality career…almost by accident.

Philipp explains: “I began my career with IHG [the InterCon’s parent company] 24 years ago in Athens by coincidence. I had a phone call at home that there was a vacancy on the front desk and I applied, but my passion had always been F&B – I had worked part-time in kitchens and waiting tables while I was studying.”

That phone call led to seven years with IHG in the Greek capital before he made a move to Spain, finally in his beloved food and beverage. Four years later he was on the move again, this time to the very glamorous InterContinental Carlton Cannes – where they do the opening of the Cannes Film Festival.

After further stints in Madrid and Miami – at a “690-room business monster hotel” – the hotelier headed to the Middle East, with his first posting in Abu Dhabi. He says, honestly: “At first I didn’t like it, I wondered ‘what on earth have I done’, it was a real culture shock.” But he soon fell in love with the region and, 10 years later, he is still here.

After stints with Holiday Inn “a major change as I had always worked in luxury, but it is a great brand and still has a place in my heart” and opening a new property in Fujairah, then came the opportunity for a move to Bahrain.

Philippe says: “The Regency InterContinental is a hotel with a lot of history, it has been here almost 37 years. It’s quite well known in the market but it has been left a little bit on the side, not really living up to its potential. We’re planning a revamp, starting with repositioning the Club rooms.” The Club rooms, which are particularly aimed at businesses travellers, will be extended across two floors with the Club Lounge being moved away from the accommodation.

Philipp also has plans to build on one of the hotel’s recognised strengths – not surprisingly, given his stated passion – the food and beverage department will move into the spotlight. He explains: “The hotel already has a good reputation in this area, so I want to build on that. For example, with pop-up restaurants and visiting chefs – watch this space for exciting future developments.”

And he also wants to build on the overall destination experience adding: “Everyone talks about the market being down, that’s true but we can’t change the market. A room is a room and a restaurant is a restaurant, it’s the quality of the service you provide that counts. Luxury must be something comfortable, not overstated. I want to develop the current talents we have in-house. I didn’t come to make big changes but to lead people in a new direction.

“I want to get people engaged with the property so that they learn something new. And, when I talk about people, that’s what I love about this job – I want to curate experiences for people, whether guests or colleagues.”

And, since his role is as IHG’s area general manager taking in Crowne Plaza, though it is under different ownership, he will also have a wider function in increasing the synergy with which the two properties work together.

I want to develop the current talents we have in-house. I didn’t come to make big changes but to lead people in a new direction.”