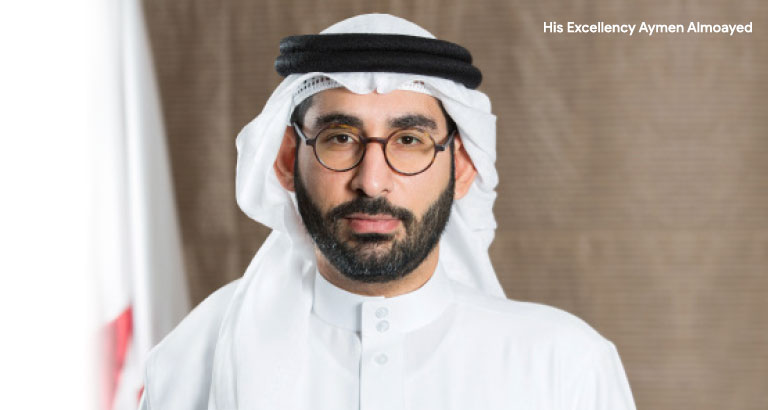 The Ministry of Youth and Sport Affairs (MYS) has been at the helm of several sporting achievements and advancements regarding Bahrain’s youth since its establishment. Farah Baig speaks to Minister of Youth and Sport Affairs, His Excellency Aymen Almoayed, who highlights an ambitious 208-week plan which was successfully implemented, laying a strong foundation for the Kingdom to further grow in the field, aside from other exciting projects in the pipeline.

Your Excellency, you have been the Minister of Youth and Sports Affairs since December 2018. What has been the most notable achievement of the Ministry in that time?
Upon joining the team at the Ministry back in December 2018, we were honoured by a personal visit at the Ministry by His Highness Sheikh Nasser bin Hamad Al Khalifa, His Majesty’s Representative for Humanitarian Work and Youth Affairs. During this visit, he met with all the senior team members and set for the Ministry an incredibly aspirational plan of action for the upcoming 208 weeks (the four-year mandate). The plan was referred to as Estijabah - the National Plan to Reform the Youth and Sports Sector.

What were the key pillars of the Estijabah programme?
There were five key pillars with regards to the Estijabah programme. Firstly, operationally separating the Youth and Sports sectors to build depth and develop expertise in each separately. This allowed us to professionalise sports and increase its penetration into our daily lives, simultaneously increasing our institutional interaction and efforts in empowering the youth.

Next, we upgraded our institutional operations and tracking processes to create an A Team with institutional knowledge and processes as opposed to individual achievers – while removing legacy hurdles which might disrupt the progress.

Further, we developed transparent systems to allow high performers to be recognised and promoted from within the sectors. In addition, we strived to create an open, competitive and just environment which promotes continuous lifelong innovation and learning.

Finally, as part of the programme, we actively collaborate and communicate with active members within our society.

How was the Estijabah programme implemented and what were its main achievements?
To do this, we literally had to work with the team in Government to restructure the whole Ministry through the issuance of the Royal Decree at the beginning of 2019.  I am very pleased with just how far we’ve come in record time; we really did hit the ground running.

The greatest honour for me personally and for my colleagues, was when His Highness Sheikh Nasser bin Hamad Al Khalifa presented the team – the Supreme Council for Youth and Sports, the Ministry of Youth and Sports Affairs and the Olympic Committee - to His Majesty the King reporting ‘Mission Completed’ - the completion of Estijabah’s 208-week programme in record time with plenty to spare.

The landmark achievements for sports in Bahrain included:
The completion of the Framework to create the Sports Authority;
Settlement of past dues for athletes;
Launch of the Sports Summit;
Professionalisation of Sports;
Adoption of Sports Contracts;
Opening club membership to all;
Allowing sport clubs to commercialise their brands;
Reinforcing the independence of sports associations to create depth of expertise;
Rebranding and refocusing the Bahrain Olympic Committee under the Team Bahrain brand and
Finalising the plans for the new Sports City in Sakhir.

The institutional framework has borne fruit faster than we have expected.  The sports achievements over the past two years are proof of the success of the programme which His Highness guided and designed – starting from bringing home the Gulf Cup, to sending the largest historical athletic delegation to the Olympic Games, to having Bahraini athletes reach world recognition including playing in the Premier League.

That is quite the feat. What were the notable achievements for the Youth Sector as part of the Estijabah programme?
There were several notable achievements for the Youth Sector as part of the programme. These included:
Refocusing Youth Centre roles to focus on discovering, mentoring, presenting and highlighting youth talents;
Licensing youth centers;
Launch of the Youth Summits;
Creating the new youth centres’ management and grant systems;
Reducing the age of establishment of companies to 18 years;
Working with the Bahrain Quality Authority to represent and voice youth interests in schools and schooling;
Launching the ‘Furas’ programme – which is an internship platform with the Ministry of Labour and Social Development and Tamkeen;
Creation of the ‘Hope Fund’ by order of His Majesty the King to invest in youth;
Supporting and coordinating with the SME Board through our new membership;
Launching new versions of the ‘King Hamad Award for Empowering Youth to Achieve the Sustainable Development Goals’ and the ‘Nasser bin Hamad International Award for Youth Creativity’.

How did you complete Estijabah’s 208-week programme in record time, considering how comprehensive the plan was?
Of course, completing these milestones is not an individual achievement, this is a team effort and the team members performed phenomenally. I would suggest that the true magic comes in the reporting system that was developed based on His Highness Shaikh Nasser bin Hamad’s request and guidance.  We created a full system to follow up and report on each milestone and ensure that everything is on track, allowing everyone to do their part in record time.

Estijabah’s 208-week programme was only the beginning; we were setting the foundation for what is to come.

Now that the plan is completed, what’s next for sports and Bahrain’s youth?
For the Sports Sector, we now have a focused, single regulating and facilitating body, the General Sports Authority, under the chairmanship of His Highness Shaikh Khalid bin Hamad Al Khalifa.  Having one accountable operational body, allows the reporting to the Supreme Council for Youth and Sports to be precise and the creation programmes and the designing plans to be targeted.

The Sports Sector now has a clear ‘North Star’ and a clear institutional mandate reflected in the ‘Gold Only – National Sports Plan’.  I have no doubt Bahrain will go from strength to strength through the execution of this plan.


For the Youth Sector, there is much to be done.  His Majesty the King reminds us at every interval that Bahrain’s true wealth is in our youth and they are “our hope”.  We have a lot of work ahead of us and this is part of what is coming our way and we are branding all this work under ‘Hope’. The simple premise of ‘Hope’ is to understand our gems and support them so they may shine.

To do so, we’ve created a full set of goals which we refer to as (5+1) which represent our aspiration, for our youth to feel safe, feel seen, feel supported, feel trusted, feel wanted and most importantly feel hopeful. We’re excited to have a large number of targeted programmes coming up including entrepreneurial pitch programmes, Hackathon Career Guidance Programmes, the Futhool podcast, the Social Entrepreneurship programme, the Youth Market and Badir.

What can you tell us about the exciting MYS Infrastructure Projects?
There are many sets of projects which we’ve been working on with the team, but the most impactful two, in my opinion, are the Street Courts and the International Sports City which incorporates a full master plan to cater to the future of sports.

We think that Sports City and the infrastructure we’re developing around it, including the cycling and sporting routes, will be a huge game changer and reinforce Bahrain as a sports destination. 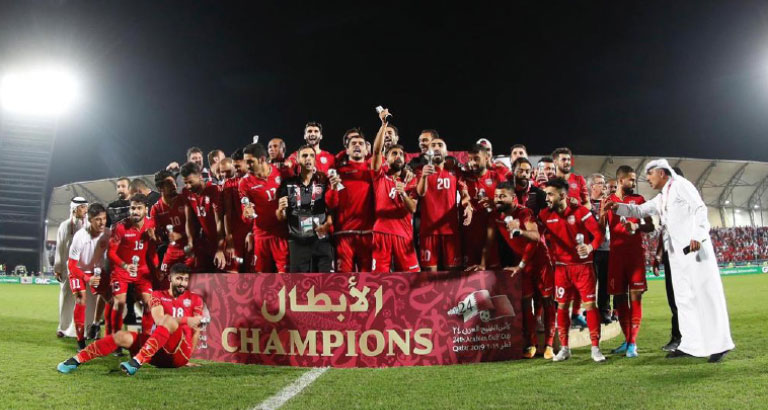 What programmes did the Ministry offer the youth during the pandemic, and how did they adapt to the conditions it imposed?
During the pandemic, MYS launched a number of important programmes and initiatives. We’re very proud that the operations of MYS were not impacted as much seeing that by the beginning of 2019, we had already moved our operations to the cloud – which was an incredible milestone to achieve.

We then created the initiative for digital transformation of youth programmes, launching the ‘Leave It to Us’ initiative to encourage young people to participate in a set of activities and programmes – making sure that we don’t lose touch with our constituency. We launched projects called ‘Digi kit’, ‘Be Strong and ‘11 Minutes’, which highlight prominent youth experiences in several fields.

MYS also amended the criteria of the King Hamad Award for Youth Empowerment to Achieve Sustainable Development Goals and the Nasser bin Hamad International Award for Youth Creativity, to correspond with the conditions of the pandemic and to shed light on international youth efforts in dealing with the pandemic.
Overall, it’s business as usual and we push on – continuing to believe in youths’ abilities and potential.

Regarding Bahrain’s participation at Tokyo 2020, how many Bahraini athletes are participating in the event and across which categories?

The Kingdom of Bahrain records an unprecedented participation in the 32nd Summer Olympic Games Tokyo 2020. We participated with 68 athletes and administrators representing five sports, namely Athletics, Handball, Swimming, Boxing and Shooting, making it the largest delegation in Bahrain’s history.

Moreover, the participation of the handball team is the first for Bahrain at the level of team games. Needless to say, we are very proud of our champions – to start, the mere participation is an achievement in itself. They are making their country and their brethren proud.

What would be your advice to aspiring athletes in the Kingdom of Bahrain?
His Highness Shaikh Nasser bin Hamad Al Khalifa had lauded the Golden Era of sports in Bahrain and I would invite all athletes to make the most of these historical times.

My key advice would be to focus on their craft – and focus particularly on their strength – and to pick their proverbial battles carefully. There is nothing but opportunity ahead for anyone that persists and makes the right decisions. I have no doubt that Bahrain has a lot of gems that have yet to be discovered and I look forward to seeing them shine in the future.