All Guts and Glory 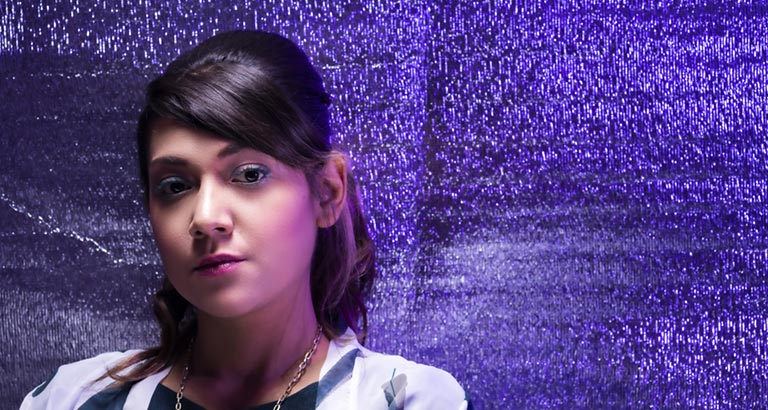 Her tryst with liver failure sent singer-songwriter May Alqasim to hell and back, on a mental, emotional and physical level. She tells Behnaz Sanjana how music gave her purpose to fight her illness thanks to an incredible lightbulb moment.

When May Alqasim was told by her doctors that her days on earth were numbered due to Primary Sclerosing Cholangitis causing liver malfunction, she sifted through all her achievements and awards acquired throughout her career in music and asked herself if she’d done enough. “Have I done enough for this country? Enough to give back? The answer was no,” says the 30-year-old Bahraini vocalist. “So, I decided to do a cover of Michael Jackson’s iconic song, Heal the World. I believed it is a message we all needed to hear at this time.”

What started as a modest project, grew into a massive collaboration with over 20 local artists and technical experts under 1LoveProductions. May was at a low point at the time, angry and confused about her health condition. “I had been misdiagnosed, wrongly medicated, not honoured by insurance companies and the rumours were that I had Hepatitis B and had abused the bottle, when in fact my illness was genetic and beyond my control.” she rues. While she was grappling with the raw deal that life had dealt her, she realised that she wasn’t alone; the whole world was in trauma thanks to the global pandemic. “I felt selfish about thinking ‘why me’, and realised that we need to love and lift one another up at this time of crises.”

May experienced serious bouts of being on the brink of death from the time the idea for the cover song struck her to it being released. “Internal bleeding put me in a semi coma. The blood banks were running out of blood for me. My heart had even stopped at one point.” When she came out of the ICU, she was overwhelmed to see the rally of support from her family, friends, acquaintances and strangers to find donors for her rare blood type. This strengthened her resolve to see her project being completed. “It is my tribute to all those who helped and stood by me.  The closer I felt to death, the more urgency this song had,” May says. “I don’t normally do cover versions, but Heal the World was everything I wanted to express. It conveys the diversity that Bahrain showcases, and makes me extremely proud of my country. We put our own twist with a rap bit in it, and I think MJ would have approved! The great feedback we got from so many people was unexpected.”

Before the project was complete, there came a harbinger of hope in the form of a donor. May travelled to Turkey for a liver transplant in the beginning of 2021 to give herself a fighting chance to live.

She considers herself lucky to have a healthy donor and a speedy recuperation. Despite which, her path to recovery was fraught with challenges. “My protein levels fell drastically, which led to Oedema. My stomach was so bloated with fluid, that my lungs were affected and my surgery scar was starting to open up,” May recalls. “They cut a hole in my torso to drain the fluid, and of all the difficult times, this was when I broke down and cried.” But through it all, she continued collaborating with her Heal the World team back in Bahrain.

May’s rock amid her ordeal was her mother. “My mom is my hero; truly inspirational. I’ve never seen a stronger woman in my life,” says May. Which is why her brand new single, 7amdillah (a stylised version of ‘alhumdulillah’), with local artist Xenai, starts with a monologue to her mother, and ends with words of gratitude to family and friends. “This single is my comeback. It is a catchy, eclectic fusion between the Western and Arabian world, with Ali Bongo’s tabla on this track. It captures our raw personalities; we have retained some candid moments of the recording that lend a fun element to it. We hope that listeners feel happy, soothed, blessed, encouraged and strong by this powerful song.”

With the right regimen, May has risen above her challenge and is raring to go.  “Besides positive thinking, music gave me the will to survive the dramatic impact that the surgery had. I went through PTSD, and I let out all those emotions and pain into my music, it’s just something I bounce off.  The surgery cut through my diaphragm muscles, which I needed to strengthen to sing again. I’m happy to get back my normal vocal range.

“I am planning another music video collaboration with big artists. This time it will be an original song and I’m so excited to get started. My purpose is to do more for others now, to give back. This industry has given me so much and I’ve become a full-fledged musician despite being a Bahraini female. With my network and know-how, I will be mentoring, training and producing songs for budding artists to help them succeed,” she reveals.

Here’s what some of the Heal the World collaborators had to say about the project!

It was great being part of such an amazing project with so many different artists! Music is a language that everyone can speak and I’m glad we got the chance to touch many hearts during this tough time the world is going through! - Tiny

It was amazing to get to know so many local artists and magical being part of a project that showcases that we, as Bahrainis, do have talent and we can heal the world together! May Alqasim gave us an amazing opportunity and I will always be grateful she chose us to bring her idea to reality. I hope we can create more projects like this.
- Yara Anwar

It was amazing to be involved in this wonderful initiative. For me, it was an opportunity to be part of the wider inclusive community. May is so positive, its simply impossible to be in a bad mood when she is with you. So, this reminded me to focus on the good stuff in life and to have faith in the younger community and the great ideas they have to make a brighter future. - Christine Gordon

When May first approached me with the idea it instantly felt like the right thing to do and I immediately started thinking about my contribution to the song, as it represented a whole movement that we are trying to implement helping the world bit by bit towards a better future. This time by a song, next an event and so on. Working alongside fellow artists, sound engineer and the videography team has been an honour and a chance to share ideas and experiences. I encourage and hope to see more collaborations as I believe we truly rise when we come together and work alongside each other. - Mohammed AlHayki

Working on the Heal the World project was an absolute privilege and blessing. I am flattered and humbled to be part of such a diverse and immensely talented group of artists! When I was approached with the idea, I fell in love with it instantly! To cover such a memorable song by such an icon and legend such as Michael Jackson, a personal idol of mine that I used to watch and mimic almost daily on VHS is something I never thought I would ever do. I can write thousands of words and still won’t be enough to express how proud and grateful I am being part of this project, and I hope that the message resonates and strikes the hearts and souls of everyone who listens to and watches it. - Salman Farooq

At OneHeartBahrain, we always look for opportunities to create more unity between people through community projects that allow people to express goodwill towards one another. May’s 1Love Productions group is guided by a similar ethos to ours and promotes a loving spirit amongst all people. Like the conductor of an orchestra, May brilliantly directed and harmonised an international group of artists and creative talent residing in Bahrain to produce the song, and the result is a testimony to her determination and vision to lovingly bring people together as one, in creativity and message. - Birthe Van Der Heijden