Ambassador of Pakistan Muhammad Ayub on Leading The Way 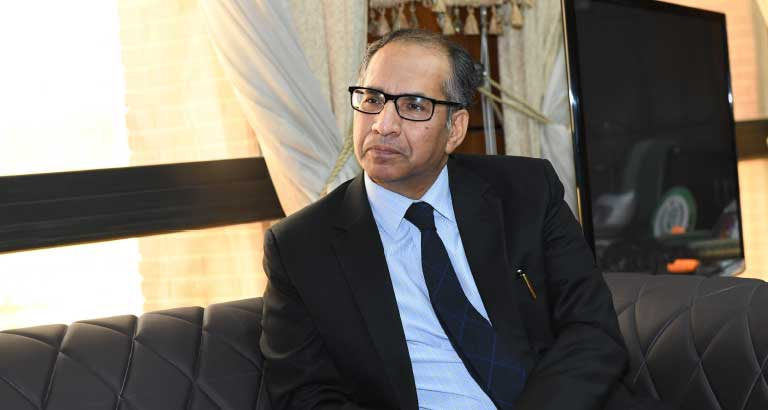 Bahrain and Pakistan enjoy a long-standing diplomatic partnership, with bilateral relations beginning in 1971. Since then, the Pakistani community in Bahrain ha

Bahrain and Pakistan enjoy a long-standing diplomatic partnership, with bilateral relations beginning in 1971. Since then, the Pakistani community in Bahrain has grown considerably, with the embassy estimating that there are more than 100,000 Pakistanis currently residing on the island. Bahrain This Month spoke to the Ambassador of Pakistan to the Kingdom of Bahrain, His Excellency Muhammad Ayub, about his diplomatic career and his plans to bolster ties between the two nations.

Your excellency, you have had a distinguished career so far. Can you give us a brief overview of your diplomatic postings and missions to date?
During my career in the Foreign Service of Pakistan, I held various diplomatic assignments at Pakistan’s Missions Abroad, including Cairo, New York, Brussels and London. In the Ministry of Foreign Affairs, I served as Deputy Director (South East Asia Pacific), Director (Arab Affairs) and Director (Europe).

Then I spent four years in the UK as the Deputy High Commissioner, and now this is my first Ambassadorship here in the Kingdom of Bahrain.

How do you feel about living in Bahrain? What are your key observations about the country and how does it compare to your previous postings?
It’s an amazing experience being in Bahrain so far. Two things struck me; firstly, the level of economic development attained under the dynamic leadership of His Majesty King Hamad, and secondly, just how well the COVID-19 pandemic was handled here. I came from the UK, which has one of the best healthcare systems in the world and the difference was stark. Bahrain’s vaccination rollout was extremely efficient.

The UK has a large Pakistani diaspora, as does Bahrain, with lots of cultural and social values evident. In Bahrain, there is a huge political solidarity with the two countries and a strong relationship between the leaders. I’ve been very fortunate to represent my country in a variety of cultures.

The warmth and hospitality I have received has been amazing, I feel at home here.

What do you consider to be your most significant achievement in this Bahrain posting?
When I arrived, we were still in the middle of the pandemic so it was difficult to find a footing. After a year, it’s difficult to register a tangible achievement, but I can say that I have particularly focused on two things. The first is the activation of dormant relations between various ministerial departments of both countries. This gave them fresh impetus moving forwards to both: solidify and expand the ties between us, which has been done by establishing joint working groups at the ministerial level and by hosting visits.

Secondly, I believe I have achieved some success in providing effective online consular services. We receive many requests in person for passports, extensions of ID, power of attorney services and much more. I took a lead in making this much easier to do digitally to avoid long waiting times and facilitate immediate help. 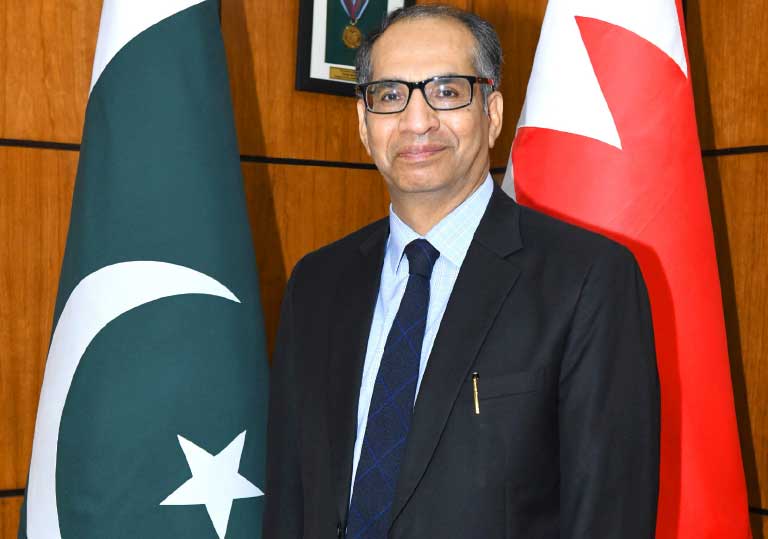 Of your many career achievements over the years, which particular experiences do you think have helped you most in your role as ambassador?
My experience at the United Nations in New York was definitely a career highlight, especially in terms of passing resolutions, as was my campaign in Pakistan for more GSP+ concessions, which was a long diplomatic campaign. I’d highly recommend any young officers to apply for these positions; it’s a huge honour!

How many Pakistani expats live in Bahrain? What are the most prominent vocations amongst the Pakistani community’s residents?
We would estimate that there are more than 100,000 here. Obviously, a large segment of our community is blue collar labour workers, but we have many educated professionals here in fields such as medicine, banking and education. We are particularly proud to have 30 university professors currently in the Kingdom who are Pakistani.

What activities does the Embassy of Pakistan in Bahrain undertake to promote cooperation and unity between the two countries?
Last year we had the opportunity to celebrate 50 years of diplomatic relations between the two countries. The anniversary provided a huge opportunity to run the gamut of celebrations and partake in numerous activities with a focus on enhancing co-ordination between our leaderships. Now that COVID-19 is mostly behind us and life is getting back to normal, we can really accelerate this and some of the plans we had last year can now come to fruition.

How do you believe the Pakistani culture has influenced Bahrain, especially in terms of cuisine which is hugely popular here?
The main aspect of Pakistani culture is obviously the food, but there are many other aspects too. During the Spring of Culture festival, we hosted numerous events featuring music and dance, including a sell-out event at the Cultural Hall last year.

If you study the history, then Pakistani culture has influenced the Kingdom in so many ways that you wouldn’t realise. Bahrain is such a special place because it is a mix of cultures, from both: east and west, and adapts things in its own special style.

What are the current trade figures between Pakistan and Bahrain and what areas of business or commerce between the two countries do you think could be improved significantly?
In terms of goods, we have USD150 million and in services this is USD160 million, so combined that is more than USD300 million in bilateral trade. Of course, this does not reflect the closeness between the two countries and the potential to increase investment. My task here is to convert the strong political partnership to an economic one, and this remains my keenest focus.

I see a lot of attention in the tourism, food security and education and training. These sectors are the most important, especially food security which is a global issue now post-pandemic, and also with the Russian invasion of Ukraine and the issues that has caused.

Pakistan has extremely fertile land, with four seasons and can grow any type of fruit and vegetables. However, it has issues with international standards for transport and infrastructure. I think there are many opportunities for Bahraini investors to collaborate with Pakistani businessmen and work to secure sustainable supply chains. Bahrain chiefly relies on imports for food, particularly from South Asia, so it’s an obvious market.

In terms of tourism, any ambassador from any country will say that their home country is beautiful, but I believe Pakistan truly is extremely wonderful. Not just in terms of picturesque locations, but business tourism too. Our cities are booming and are becoming hotspots for global businesses, so they are ideal for Bahraini investors to visit and perhaps create networks there.

Is there anything else you would like to add?
This year, Pakistan is celebrating its 75th anniversary since its independence, and so we have events running all throughout the year. These activities will continue through until March and we are very excited to showcase our country, show unity with Bahrain and strengthen our relations with the Kingdom going forward.

READ NEXT: A Champion for the Arts: Shaikh Rashid bin Khalifa Al Khalifa

Ambassador of Pakistan Muhammad Ayub on Leading The Way .