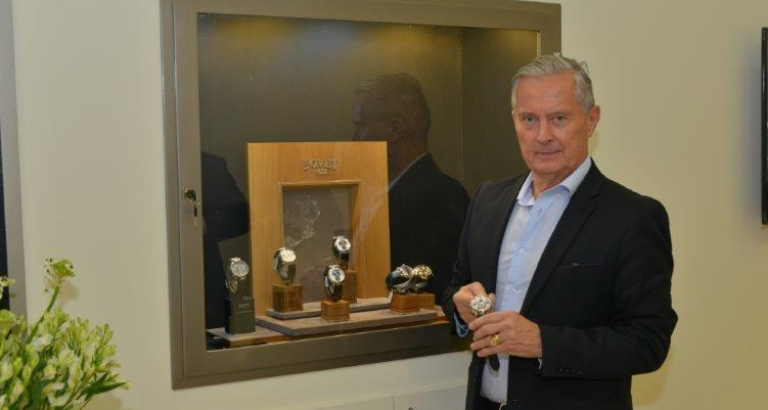 Kurt Hefti, sales director at Bovet, talks to Adnan Sipra about representing the House of Bovet, attending Jewellery Arabia and returning to Bahrain.

Kurt Hefti carefully cradled an elegant wristwatch in his palm. “The Amadéo system,” he mused, bringing his other hand into play, “enables you to convert your timepiece from a wristwatch” – with a few deft moves – “… into a table clock.”

He set the clock down on a table placed towards the back of the House of Bovet booth at the Jewellery Arabia exhibition and smiled at his visitor. “And,” he said, picking the table clock up again, “it comes with a chain. Close it …” – a few more deft moves and the timepiece had been transformed again – “… and you can wear it as a pocket-watch, which is very elegant if you have a three-piece suit. We also have models for ladies where, instead of changing into a pocket-watch, the timepiece converts into a necklace.”

Kurt, a Swiss national associated with the watch industry since 1989 and, for the past seven years, the sales director, was in Bahrain to showcase his company’s wares at the annual jewellery gala held at the Bahrain Exhibition and Convention Centre.

“The Bahrain exhibition becomes more and more beautiful every year,” he said. “There are so many different brands and the stands are improved each time. And, every year, it’s like you come back to a family reunion. That’s quite nice too.”

He has another reason to like coming back to Bahrain: Kurt lived in the Kingdom in the early 1980s. “It was the best place to be. It was the pearl of the Gulf,” he reminisced. “Most of the international companies were based here. And I spent four wonderful years, really enjoyed my time here.”

The overhead lights reflected off the glass cabinets surrounding Kurt and his visitor as he turned his attention back to an array of watches at his elbow. “This is the Bovet Récital 22 Grand Récital,” he said, cradling a very sophisticated watch in his hand. “This is the one that won the most coveted prize, three weeks ago, at the Grand Prix d'Horlogerie de Genève. The Aiguille D’or Grand Prix is like the Oscar for the best film, so we were very excited to have won it. Then, last week, I was in Dubai for the Middle East Watch of the Year awards and, for this timepiece, we won ‘Best Design’.  And, we won an award in Russia also, so, in the last three weeks, we’ve picked up three awards. But the most prestigious one of all is the one in Geneva, called the ‘Hand of Gold’.”

The award-winning Grand Récital timepiece is the third in a series that was launched in 2016 and, befitting the painstaking and intricate craftsmanship that goes into creating this collector’s item, 60 Récital 22 timepieces are produced – it is priced at a stellar US$ 430,000.

“This is all hand-finished,” Kurt explained, still cradling the Récital 22. “There’s an awful lot of hand-craft going into it. Every component, whether you see it or not, is beautifully hand-crafted so, in a way, it’s like Rolls-Royce and Bentley cars: they’re hand-made and feature in very limited production. People understand the Rolls-Royce analogy when they see the positioning of Bovet, which is very, very high.”

He placed the timepiece back in a special pouch carrying other Bovet watches. “We are not a mass brand. We are very exclusive,” he said. “But, for me, what’s important about being part of an exhibition like this is that you get to present the House of Bovet to people who have never seen it before. With Bovet, we have such an interesting selection and, when we do the demonstration with the Amadéo, we notice the way people’s eyes light up: they’re discovering something new and they’ll go off to talk to their friends.”

A photographer walked in just then and, as Kurt rose to accommodate his request, he turned his thoughts back to the Jewellery Arabia exhibition. “For the Middle East region, Bahrain is a very good exhibition,” he said. “One of the things I love about the Middle East is that you actually build a solid relationship with your partners – in our case, Asia Jewellers, who are our exclusive partners.

As he prepared to bid his visitor farewell, Kurt looked around the House of Bovet booth. “I’m always delighted to present a collection to people,” he explained. “Especially when children come in, when they discover the magic of watchmaking, who knows, one day, they might want to join the industry as well?”