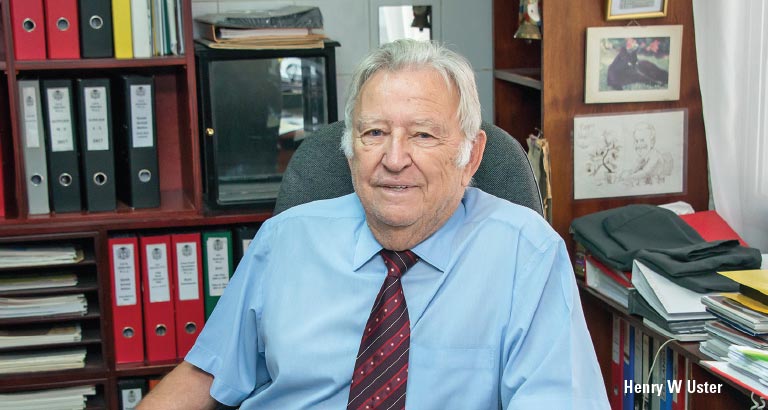 Now 80 years of age, Henry recalls fondly a childhood that instilled a strong work ethic. “As a youngster of six or seven years, I was already working in our family farm, restaurant and hotel,” he explains. “There were a lot of jobs, so, of course, you had to help. Then I would go to the farm [the family business was already embracing the farm to table concept] and help with the cows; that’s just what you did.”

At his grandmother’s recommendation, Henry went to commercial college to learn about business. However, when his older brother, Albert, emigrated to the US, his mother convinced him to take on an apprenticeship as a professional waiter at the renowned Palace Hotel in St Moritz.

It was three years of training, at the end of which waiters were expected to speak several languages as well as learning about food and how to comport themselves. And though it was not Henry’s first choice, he says: “In later days, I was very happy that I went through that – you learn how to work, how to live and how to deal with people. You meet important people and learn how to work with and serve them. That personal contact becomes natural and it has served me well throughout my life.”

He stayed in hospitality, eventually becoming VP of operations at Swissôtel Hotels and Resorts in Switzerland, the company which also boasted the national airline Swissair and Nestlé. It was in this capacity that one of his managers called him one day to come to Geneva and meet a VIP guest. That meeting, with a member of the Bahraini royal family, was to change Henry’s life.

After some months of communication, he was offered the opportunity to move to the Gulf and work for the government in property management – and 32 years later, he is still here and feels that Bahrain is very much home.

At the end of his government career, he decided it was time to work for himself and, inspired by the brother who moved to America all those years ago, he decided to take advantage of his connections in the Swiss catering and hospitality industry to launch Swiss Food Specialities, supplying high-end Swiss creations such as chocolate and frozen bakery products to five-star hotels and restaurants across the Gulf.

Henry says: “We started out very small, but that original grounding that taught me the importance of hard work and a way of serving people, has contributed greatly to our success. And, of course, we are supplying very well-known and respected products and people trust the company because we have an honest, ethical way of doing business.”

And, of his love for Bahrain, he concludes: “For the first three or four years, my wife didn’t want to come here. She eventually did and it has become our home. It’s important to realise how vital Bahrain is in terms of commerce, but the most important thing about the country is the Bahraini people themselves. You could offer me a million dollars, two million, three, I would not leave here, it’s my home.”