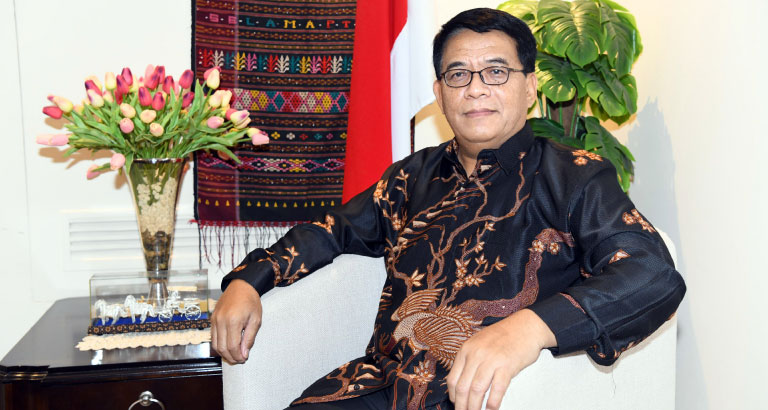 The Kingdom of Bahrain and Republic of Indonesia have enjoyed diplomatic relations since 1984. The Indonesian community in Bahrain now consists of 5000 people while trade relations, too, have diversified over the years. Bahrain This Month speaks to the Indonesian Ambassador to the Kingdom of Bahrain, HE Ardi Hermawan who enlightens us on current trade figures, potential commercial collaborations, and more.

Your excellency, could you tell our readers about yourself and your life growing up in Indonesia?
I was born in Padang, West Sumatera, but I spent my youth in Surabaya, East Java. I met my wife and now we are blessed with three daughters and two grandchildren. Since then, we lived in Jakarta.
Being a government official is no stranger to me. My father worked as a civil servant and always moved from one city to another in Indonesia. None of my daughters follow my path career, though; two of them are working for start-up companies and the youngest is working for a British consultant.

What does it take to become an ambassador? Can you give us an overview of your diplomatic missions to date?
I earned my BA in International Relations at Universitas Airlangga in Surabaya following which I pursued my postgraduate in Australia, Diploma at the Australian National University, and Masters from the Monash University.
My first diplomatic service was at the Indonesian Embassy in Paris from 1994 to 1998, then at the Embassy in Budapest from 2001 to 2005, and Tokyo from 2008 to 2011 where I became the Deputy Chief of Mission. After that, I served as Indonesian Consul General in San Francisco from 2014 to 2017. Prior to holding my post here in Bahrain, I was assigned to the Ministry of Tourism of the Republic of Indonesia for three years, from 2018 to 2021, first as the Director of Asia Pacific Tourism Marketing and then as the Director of Investment Management.
I started and spent most of my career for 35 years at the Ministry of Foreign Affairs.

In 2021, Indonesia’s President Joko Widodo officially inaugurated 17 extraordinary and plenipotentiary ambassadors (LBBP RI) at the state palace. How did you feel being among those honoured?
I felt proud and honoured as I believe being an ambassador is the golden achievement for every diplomat. Yet, at the same time, I felt humbled. I realised I could not get to this position today without the support of those close to me, my family, and my previous teams - whether it be the one in Jakarta or at the Embassies and Consulates. To me, being an ambassador is not only an assignment but an Amanah (a trust) from the President that has to be returned through the benefit of the people of Indonesia in Bahrain. 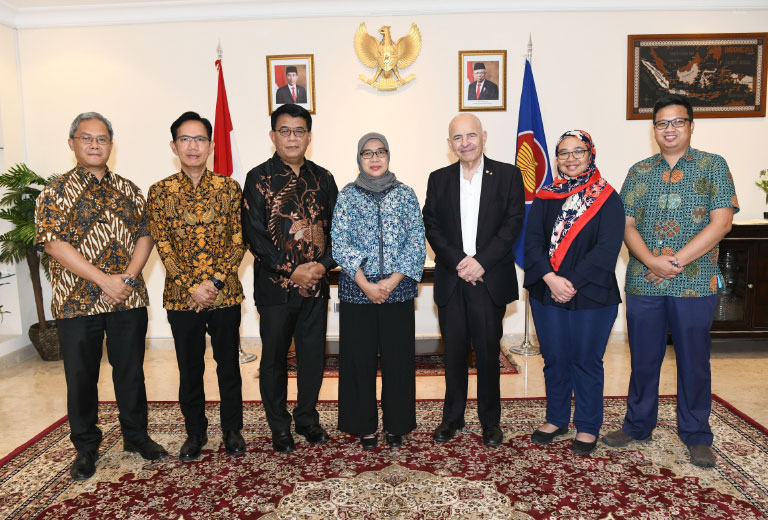 What does your role as an ambassador in Bahrain entail and what has been your most significant accomplishment to date?
I was tasked with various assignments, but the most important was strengthening the bilateral relations of Indonesia and Bahrain in every sector as well as delivering protection and citizen service to Indonesian nationals in Bahrain.

Since I arrived here, I have made courtesy calls to His Majesty Hamad bin Isa Al Khalifa, and the Crown Prince and Prime Minister His Royal Highness Prince Salman bin Hamad Al Khalifa. In addition, I have met with with ministers, parliament members, businessmen, the Chamber of Commerce, labour authority, culture authority, members of the media and more. The message is always encouraging and positive - Bahrain is ready to enhance its relations and cooperation with Indonesia.

In addition, we had an exchange of visits from the dignitaries, businessmen, sport athletes, as well as culture delegation. We also actively participated in a number of cultural festivals including the recent Bahrain Summer Festival last July. In addition, we conducted trade promotion activities, including the famous Indonesian Tea and Coffee Promotion last May which concluded with a trade deal for six tons of a single origin Indonesian Arabica Specialty Coffee.

Further, we look forward to the Indonesia – Bahrain 2nd Joint Political Consultation which will be held in Manama this year. We are proud of the Bahrain Indonesia Business and Friendship Society (BIBFS), which has been in existence since 2017, and is as one of the prime movers behind our task to increase culture and economic networking and activities.

What are the current trade figures between Indonesia and Bahrain?
During 2021, based on the data of the Ministry of Trade of Republic of Indonesia, total trade volume between Indonesia and Bahrain reached USD267 million, an increase of 57 percent compared to the total trade volume on 2020. In 2022, up to July, it has shown a 49 percent increase compared to the same period in 2021. The trade figures of the two countries look promising and keep increasing each year.

The main import commodities from Bahrain are crude oil, aluminium, and iron products. Meanwhile Indonesia exports motor vehicles, palm oil, and paper products. Nevertheless, there are also some other potential commodities that have emerged and are being explored including blue crab from Bahrain, and Arabica specialty coffee, snacks or confectionaries from Indonesia.

How many Indonesians are currently residing in Bahrain? What are the key sectors that they are engaged in?
As per the latest data from the Labour Market Regulatory Authority dated December 2021, there are more than 5000 Indonesians residing in Bahrain. Most of them are semi-skilled to professional workers, among others in hospitality sectors (308 persons), seafarers (116 persons) and traders (99 persons). There are also Indonesian professionals who are working as IT consultants posted in the Royal Court (14 persons), real estate (8 persons), mining and quarrying industries (three persons), and professors in universities (three persons).

Similarly, how many Bahrainis are currently residing in Indonesia? Is it considered to be a popular holiday and business destination in the Kingdom?
People in Bahrain are gradually learning more about Indonesia beyond Bali and Jakarta. Bahraini travellers can enjoy the visa on arrival facility to enter Indonesia with the duration of stay being 30 days extendable by an additional 30 days.

Prior to the pandemic era, there were 2000 to 3000 Bahrainis travelling to Indonesia annually for various purposes. Compared to other countries the number is relatively low. However, Bahraini visitors who visit Indonesia have the most potential. Bahrain business delegation is known as one of the frequent visitors of Trade Expo Indonesia.

Having said that, the way I intend to strengthen the level of our bilateral relations is always to look for potentials of cooperation and breakthroughs in the economy, trade, investment, education and tourism.
We will assume the Chairmanship of ASEAN next year. We will render our full support for Bahrain’s interest of becoming the Sectoral Dialogue Partner of ASEAN and its effort to enhance cooperation with ASEAN Member States in all pillars of ASEAN Communities; Political Security, Economic, and Socio-Cultural Community.

Is there anything you would like to add?
Indonesia is proposing the re-opening direct flight between both countries. Having said that, I would like to encourage Gulf Air to re-open the Bahrain-Jakarta route. It will not only increase and intensify people-to-people contact, but also ease the movement of commercial goods further promoting trade relations. In addition, Bahrainis who would like to travel to other destinations in East Asia and the Pacific will transit and visit Indonesia before continuing their journey.

Furthermore, there is a captive market of around 1.2 million annual Umrah pilgrims from Indonesia which could be tapped into by the Gulf Air, which has been seized by airlines of other GCC countries. Some of those airlines also offer city tours after Umrah. I hope Gulf Air will offer Indonesian jamaah a transit after their pilgrimage, so more Indonesians stay and visit the beautiful Bahrain.