At the Helm of Affairs 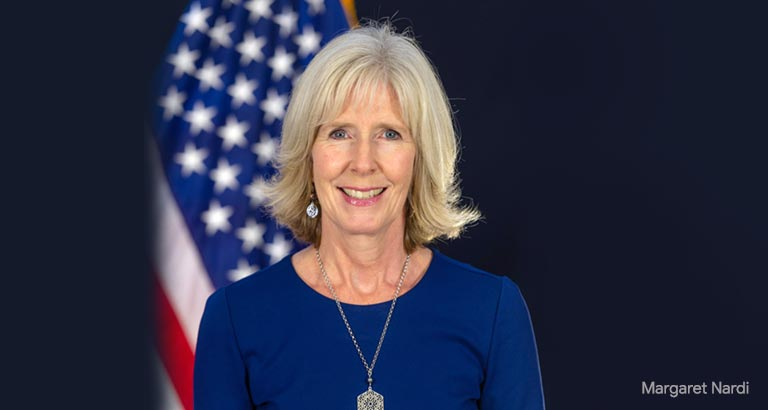 Chargé d’Affaires at the US Embassy in Bahrain, Margaret Nardi, has witnessed some trailblazing developments in relations between Bahrain and her country since her time on the island. She shares deeper insights on current US-Bahrain ties with BTM.

Could you highlight the current status of trade relations between Bahrain and the US? Are there any developments in the pipeline to further strengthen the commercial relationship between USA & Bahrain?

Economic development and strengthening commercial relations are among our top priorities. Since the 2006 Free Trade Agreement (FTA) with Bahrain,  trade has tripled from USD780 million to USD2.5 billion. We continue to look for more opportunities to bring U.S. investment here.

We have highlighted what U.S. companies in Bahrain are doing to help Bahrain operate through the pandemic. For example, textile manufacturer, WestPoint Homes, has converted their production capacity to include making face masks. Some of them were donated to the Bahraini government, and others exported to the UK, U.S., and other markets. The company saw this as an opportunity to expand their business into the hospital and medical market. U.S. technologies, like Cisco, Microsoft, Amazon Web Services are being used here in schools, the embassy, and by the Bahraini government.

With the new U.S. administration’s focus on the environment, we’re hoping to work with Bahrain on sustainable energy developments as well. U.S. companies are involved in a lot of the major infrastructure projects  whether it’s the design work for the new causeway to Saudi Arabia, baggage screening at the new airport, or in telecommunications. Besides this, we try to expand in newer areas as well, and see if there are opportunities for U.S. businesses working with the American Chamber of Commerce in Bahrain.

This year marks the 15th anniversary of the FTA between Bahrain and USA. What do you see as being the key benefits of this agreement for both parties and can you tell us a little bit about the untapped opportunities for further growth under the FTA?
Well, I think that flow of two-way trade of industrial and consumer products without tariffs  is definitely the main benefit for Bahrainis and for American companies. For the United States, having access to the broader GCC market is also an advantage as far as what more can be done. There is still a very large segment of the business community in Bahrain that is not aware of the FTA or what its benefits are. So, we’re trying to do business outreach programs for them. We did a week-long series for women entrepreneurs to explain what the FTA means, the benefits of the FTA, and to answer any questions they had to help get them started.

The Embassy also sponsored a contest with FinTech Bay  for entrepreneurs to develop new apps. The winner received seed funding and training to support their business development.

How will the end of the pandemic affect business and trade between the two nations?
The pandemic hasn’t had a huge negative impact on business and trade between the U.S. and Bahrain because a number of the client companies that are here are in areas that were actually in greater need during the pandemic. I would say access to resources was one of the limitations, but I don’t think that there was a significant negative impact on U.S. companies. Also, the Embassy is now issuing multiple entry 10-year business/tourist visas to Bahrainis, and these things are going to help stimulate business further.

Are there any, or likely to be any high-level delegations or VIP visits from the States to Bahrain or vice-versa that are planned at present?
In my view, visits here are the best way for officials in Washington to understand Bahrain. From September last year to January 2021, we had high-level visits almost every week, following the signing of the normalization agreement between Bahrain and Israel. We are hoping to start receiving visitors after the easing of travel restrictions. Right now, travel from the State Department is limited.. However, we expect a robust U.S. delegation to attend the Manama Dialogue, as we have seen every year since the Manama Dialogue started in 2004. It is our goal to attract participants from both the legislative as well as the executive branch.

Vaccine development and distribution has become priority in the global flight against the COVID-19 pandemic. The US-manufactured vaccine, Pfizer, proved to be quite popular among Bahrain’s citizens when choosing a vaccine. What are your thoughts on this?
The U.S. joined the international Covax scheme with a goal to donate $2 billion to vaccinate 30 percent of the eligible population in every member country. We have been encouraging Bahrain and our other partners to also contribute to Covax.  The U.S. is now starting to donate some of its extra vaccines to different countries that are in dire need. We have been very impressed by Bahrain’s effort from the beginning to tackle the pandemic, and  have been making efforts to support the government’s efforts to expedite the deliveries of the Pfizer vaccine.

His Royal Highness the Prime Minister Sheikh Salman bin Hamad Al Khalifa has had remarkable foresight. Where else do you have four different vaccines to choose from? Some of us at the embassy, including myself, got our vaccines from the Ministry of Health earlier on and we’re very grateful for that.

Since you have served both the present and former administrations during your term here, have you experienced any dichotomy of interest from the two State Departments with regard to your dealings with the Government of Bahrain?
The Biden Administration immediately rejoined the WHO and rejoined The Paris Agreement for climate change. All of those things also impacted us here in Bahrain. There has been more focus on supporting sustainable energy or environmentally sound efforts in the countries where we live. There continues to be a strong focus on human rights and that’s an area where we already have very good engagement with the government. The United States is also seeking election to the UN Human Rights Council for the 2022-2024 term.

What has been your most memorable engagement as US Chargé d’Affaires and why?
The past year was a memorable one for the U.S., Bahrain, and indeed the whole world.  I will never forget working with my staff, and our Embassy community, to deal with the COVID pandemic, while also handling visits of the U.S. Secretaries of State, Defense, and Treasury to mark Bahrain’s normalization with Israel and the signature of the Abraham Accords.  I am so proud to have led such an impressive Embassy team at such a historic moment!