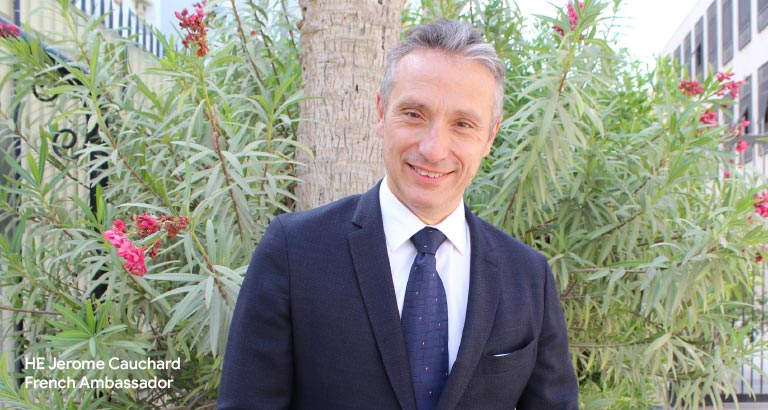 With Bastille Day around the corner, French Ambassador, HE Jerome Cauchard, talks of strong relations with Bahrain.

I believe this is your first posting as head of mission, how has your career to date prepared you for this role?
I worked in the past at the French Presidency, also with French Prime Minister as Deputy Chief of French State Protocol. I was diplomatic advisor to the President of the upper chamber of Parliament. I have also been Consul General and twice Deputy Head of Mission.

So, I can honestly say that I was prepared, but it must be acknowledged that a posting as Head of Mission bears no comparison. You feel it when you are introduced to His Majesty the King with your credentials. It is definitely something new.

You have been here almost 10 months now. How are you finding life in Bahrain? (pre and post restrictions.)
I was very busy after my arrival. Time just flew by. There are so many things to do and discover in Bahrain, in many different fields: political, economic, cultural, religious, social, sport and even animal welfare.

Of course, life has changed with the restrictions due to the pandemic, with a broader use of remote work and video for example. But it seems that we are on the move again.

How many French nationals are residing in Bahrain?
Around 1,100 French citizens are registered at the Consulate, who live in Bahrain and contribute by their daily actions to the relationship between France and Bahrain.

The Africa-Middle East headquarters of BNP Paribas bank and the insurance company Axa have been located in the capital since 1975, illustrating the role of regional hub that the Kingdom has been playing. French nationals are also working in the educational and cultural sectors. And, of course, my colleagues in the French Embassy. 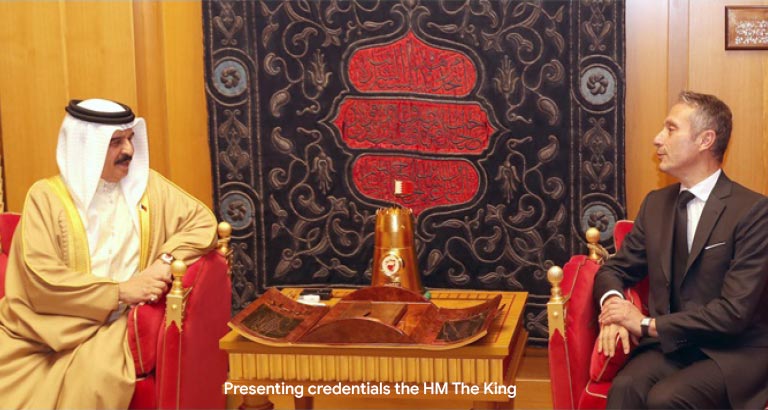 What are their main concerns and how does the embassy deal with these? And how is the embassy supporting the community during the current pandemic conditions? Are you aware of any French nationals who have contracted the virus?
Our embassy has kept close contact with the French community, updating relevant information on a regular basis. Fortunately, according to our knowledge, only one French citizen has been infected until now. With a full recovery.

The French Embassy a been in touch on a regular basis with the French community, providing practical information, useful internet links and guidance. Of course, we have a special highlight on international travel from abroad to mainland France and on rules governing entry into the French territory (for example the required international travel certificate and sworn statement of absence of Covid-19 symptoms and of contact with confirmed cases). And these regulations have been evolving in line with the sanitary situation in France.

Generally speaking, and having in mind that there is no vaccine yet, the French community has been fully committed to compliance with regulations taken by the Kingdom’s authorities. These regulations and precautionary measures were taken at an early stage, like the closure of schools, the choice for large-scale testing, e-services in the administration or self-isolation. Every country has to address the epidemic with a specific mix of measures. The French community of Bahrain has been confident. In this regard, it should be noted that Gulf Air has kept open the air route between Manama and Paris. It helped a lot. And we do not forget all the health workers. Their devotion and personal investment are to be commended. 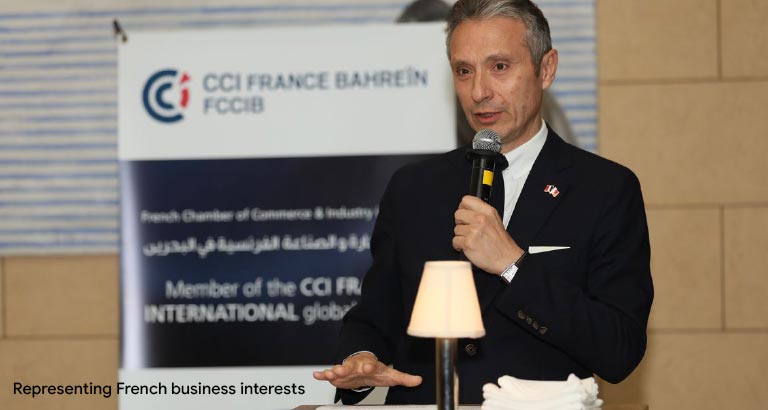 What are the current trade figures between the two countries?
With a trade exchange of almost USD560 million in 2018, Bahrain succeeded in maintaining its position as a partner of choice for French companies that wish to benefit from its favourable business environment.
The economic trade balance sheet of 2018 reflects a dynamic commercial partnership to the short advantage of France. According to customs statistics, bilateral economic exchanges (goods only) between France and Bahrain in 2018 reached a value of around USD496 million.

Do you believe these can be improved and, if so, how?
Yes indeed. Both sides want to improve our bilateral economic and commercial ties. In the transport sector, the country has announced the construction of a metro network and a second bridge, with a road and rail axis, with Saudi Arabia. In the petroleum sector too, the country is also seeking to ensure the exploitation of unconventional hydrocarbon reserves whose discovery was announced in early 2018.

A lot of French firms may be interested in those projects and I am here to support them in this process.

Are there any recent trade developments that you can share with us? Such as business won by French companies, for example the agreement to provide frontline robots for Covid-19 and the agreement between Export Bahrain and FCCI Bahrain last November.

The major projects in which French companies are engaged include: the extension of Bahrain International Airport –Aéroports de Paris is responsible for the design and Thalès the establishment of a management and operational security system– which will allow a capacity of 12 million passengers per year to be reached, compared to nine million today; the renewal of the fleet of the national airline Gulf Air, including the on-board entertainment and connectivity system; the increase in production capacity of the aluminum foundry operated by the public company ALBA, through the construction of a sixth production line, for which the French specialist Fives won three contracts in 2016 relating to the supply of services and industrial engineering; the production of electricity and the desalination of seawater by reverse osmosis [Engie] or even the management of infrastructure cooling circuits [Veolia]. And recently an agreement was signed with a French company specialised in biological protection of palm trees, part of this country’s history.

Let me add that French SMEs are also active, supported by the French Embassy but also by efficient partners.
Export Bahrain and the French Chamber of Commerce and Industry in Bahrain (FCCIB) signed a memorandum of understanding to foster export opportunities for Bahraini SMEs to export their products and services to the French market.

The two organisations will work to support businesses from various sectors to explore possibilities in the French market and provide them with solutions to identify French potential partners and buyers.

Are there any high-level trade delegations or VIP visits planned for the future? If so, how will these be managed?
With the pandemic, we don’t have a clear agenda regarding this matter but, when the situation improves and business is back to normal, some high-level trade delegations or VIP visits might be planned for the near future. We are already planning virtual conferences and meetings. We also expect a high-level delegation in connection with the Manama Dialogue. 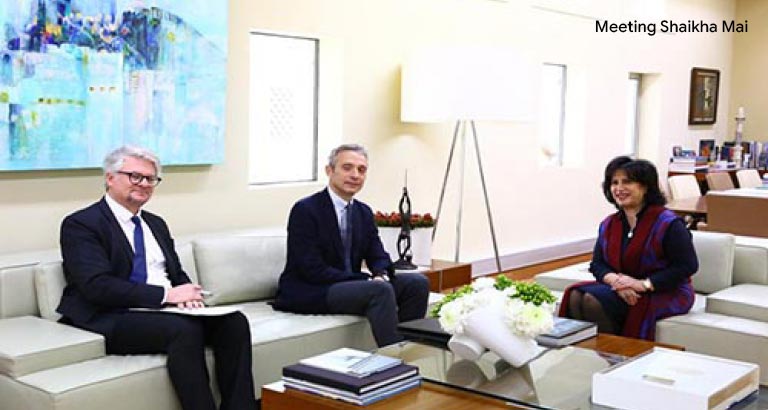 The role of cultural exchange between the two countries has always been an important one. How is this being developed for the future? How was the idea for the virtual Let’s Make Music Festival received?
The cultural relationship between both countries is strong, long-lasting and even improving. I had the chance to meet the President of Bahrain Culture and Antiquities Authority (BACA), Shaikha Mai bint Mohammed Al Khalifa, very soon after my arrival. I was deeply impressed by her unwavering commitment to Bahrain’s cultural field in which she has made such strong contributions.

France is fully involved in the cultural field, as you know. So, we try to be a reliable partner as often as possible. For example, it is not always well known, but we have had a dynamic archaeological mission for the last 40 years (and more) in the Kingdom, which has greatly contributed to establishing the Qal'at al Bahrain museum, for instance. The Alliance Française in Isa Town goes even further back in history as we celebrated its 50th anniversary last year! Its cultural programming is very diverse. Going forward, we are focusing on cultural and creative industries, such as video games and virtual reality, we had a very successful VR exhibition last November.

We support the idea of the virtual Let’s Make Music Festival and we are in touch with Bahrain Authority for Culture and Antiquities about it.

What are your hopes for the remainder of your posting in Bahrain?
As a whole, the French Team wants to keep moving forward!

Anything else to add?
I want to thank Bahrain This month for providing this wonderful opportunity to celebrate together the French National Day, the ‘Bastille Day’, July 14. This year’s celebration may take place in a 'different' way but I am confident that all those who celebrate this event with us, share on that occasion the same emotion, the same values and the same confidence in France’s future.
Bon 14 juillet à tous!