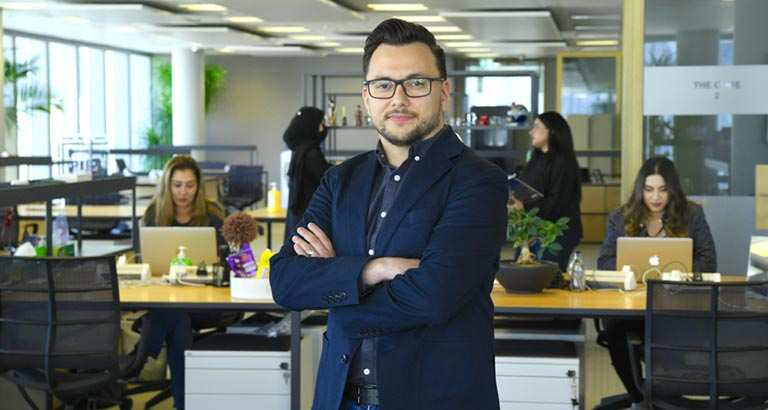 Bahrain This Month speaks to CEO of Bahrain FinTech Bay, Khalid Dannish, about the Kingdom’s FinTech industry, the potential for Bahrainis in the field and the accomplishments of the incubator to-date.

There’s no denying that technology plays a vital role in our daily lives. With the dawn of the pandemic, the need for technology grew tenfold with its increased application in every aspect. This extended further to the world of FinTech which was propelled to new heights as the need for integration of technology in the finance industry grew. In the Kingdom of Bahrain, the FinTech industry thrived as established companies ventured into modernising and advancing their operations while innovative startups brought life to their concepts.

Leading FinTech Hub in the Middle East, Bahrain FinTech Bay, has proved to be an invaluable incubator for the industry in Bahrain. The ecosystem has thrived under the guidance of CEO of Bahrain FinTech Bay, Khalid Dannish. “I really cut my teeth in London and the investment banking world at the height of the financial crisis. So, I could say I›m used to a challenge and really, I’ve always gravitated towards roles that were in the investment banking space and also roles that sit between technology and business,” says Mr. Dannish, who took on the role in February of 2020, right on the heels of the pandemic.

Despite spending a majority of his professional and personal life between the UK and Bahrain, the opportunity to be part of the founding team that develops an authentic FinTech ecosystem in Bahrain was compelling enough for Mr. Dannish to return to the Kingdom’s shores. “It was a no brainer for me to move back and be a part of this exciting journey,” he says.

A Growing Industry in Bahrain
The Kingdom of Bahrain is currently home to around 100 FinTechs while around 200 startups are operational in the broader technology field. “A majority of them are fairly young companies, so each one of them employs five to ten people. However, we do have some large-scale companies that employ over 150 people at a time, typically mostly Bahrainis as well,” explains Mr. Dannish.

The number of people currently employed in the FinTech industry has been growing steadily around the world with Bahrain being no exception. “If you look at the FinTech ecosystem at large, you have to not only consider the entrepreneurs employed within Fintech but those involved in corporate FinTech solutions or government entities… the whole plethora of roles involved,” he says.

«So, when thinking about how many people are currently employed in Bahrain’s FinTech industry, it’s hard to put a number on it; I would, however, say that it’s in the thousands when you consider all the stakeholders in the ecosystem,” he adds.

The Role of Bahrain FinTech Bay
“Our broad mandate was to establish a FinTech hub to really attract best-in-class technology from all over the world while simultaneously developing our local digital economy as part of a national agenda,” explains Mr. Dannish.

The incubator was formed in partnership with the government, and strategic industry partners such as local and international banks, telecommunication companies, insurance companies and asset managers, with the intention of collaborating to build an inclusive platform. “We distilled our vision into several key themes including incubation, acceleration, talent and education, investment awareness, thought leadership conferences and events, and corporate innovation and advisory,” he says.

Since the establishment of the incubator, several lucrative partnerships have come into place. “We’ve seen corporates engage with FinTechs, academia partner with technology providers and FinTechs collaborate with each other too. It’s been an array of partnerships and our job is to facilitate these meaningful interactions.”

Bahraini Talent in FinTech
“I think we have a strong workforce and can see a tremendously entrepreneurial spirit in them,” he says.

The thriving industry provides plenty of opportunities for young Bahrainis to enter to enter the field whether through the influx of startups coming into the country or locally-initiated startups. “Of course, this talent needs nurturing and they require guidance in best practices which is where some of our incubation and acceleration programmes come into play as well,” he says. “FinTechs coming into the country as well as corporates are hiring locally en masse. So, there is a value proposition for the country and it’s for young Bahrainis to take advantage of it.”

With the industry thriving there is now potential for education providers to offer more specialised programmes to enhance the employability of Bahrainis in the field. “There’s definitely scope for improvement for more specialised courses. We’re starting to see some universities come out with more specialised courses in artificial intelligence or broader FinTech. I think they’re in a very privileged position as they can really determine the outcome of the specialisations in our workforce,” he says, highlighting that it is the universities’ role to guide the youth through new opportunities in the region.

“That being said, I think there is an opportunity for us to specialise in more technical related fields, like artificial intelligence, data science, blockchain and software development as that can only strengthen our kind of proposition, but really that education can start at a fundamental level even earlier than universities – it can start in schools,” he adds.

FinTech in the Time of COVID-19
At the beginning of the pandemic, Bahrain FinTech Bay partnered with the US State Department under their Middle East Partnership Initiative (MEPI). “We designed a programme called ‘Build for Bahrain’ which was tremendously successful. It was purely for locals and focused on three key areas: community, health and business continuity which was tremendously successful,” he says.

“We were broadening our horizons from then looking at HealthTech, EdTech, and FinTechs on how we can assist economic recovery, which was undoubtedly going to have an impact on the kingdom. I think by and large, what the pandemic has emphasised is that we need to embrace change quickly and we need to deliver services in a more efficient manner,” he elaborates.

The team collaborated with the government and corporates to launch solutions so business could continue at a time when in-person interactions were less than ideal. “I believe FinTech by and large has enabled businesses to secure cash flow and their operations which, without the technology provided by FinTech, would be tremendously hard to do. I think the pandemic has highlighted the role of FinTech, how important it is and how ingrained it can be, not just in our lives but in industry and government as well.” 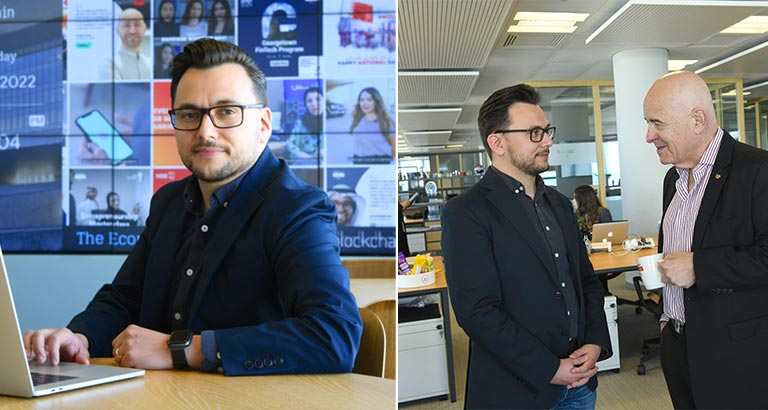 Unmatched Achievements
Since his appointment as CEO, the establishment has enjoyed its fair share of success and commendable achievements. “We actually launched a whole new series of cohort-based acceleration programmes and simultaneously wrapped it under the umbrella of a new strategy called ‘Innovate for Bahrain’ at the beginning of the pandemic,” he says, adding that the purpose of ‘Innovate for Bahrain’ was to enable local entrepreneurs and provide a platform for them to develop solutions for the Kingdom and region.

The series kicked off with their first acceleration programme, which was fully virtual – a first in the Kingdom of Bahrain. “This was a programme which focused on female entrepreneurship - Standard Chartered’s global Women in Tech programme, which we localised for the Kingdom. We offered mentorship support, prize money, as well as follow on incubation which was tremendously successful,” he states.

Bahrain Fintech Bay’s National FinTech Talent Programme is a significant collaborative effort in partnership with Tamkeen and Georgetown University McDonough School of Business. “It’s something we’re quite proud of as we took young, Bahraini graduates and enrolled them as part of this professional course. We supplemented it with internships with startups in the FinTech space, and also corporations looking at digitalisation and authentic innovation,” he explains.

“The best performing candidates were sent to Singapore for six weeks or San Francisco to get a sense of more mature FinTech ecosystems,” he adds.

To date, Bahrain Fintech Bay has not only witnessed the growth of startups, but seen corporates launch digital online banking services as well as the rise of new funds and support for FinTech in the Kingdom.

A New Year
For the year 2022, Bahrain Fintech Bay intends to venture into broader technology themes and deeper into existing FinTech verticals. “One project that is coming up is born out of our partnership with the Real Estate Regulatory Authority (RERA) through which we are looking to develop PropTech in Bahrain,” he says.

The organisation intends to broaden their scope of services and partnership network both: regionally and internationally. “For us, it›s really about capitalising on all the good work we›ve done, remaining relevant and at the forefront of authentic applications,” he says.

“I think collectively, we›re now in a position where we’re a FinTech hub in our own right. We›re attracting some of the bigger FinTech unicorns from all over the world. So that’s testament to our strategic position in the kingdom and also the way that the ecosystem is moving forward,” he concludes.