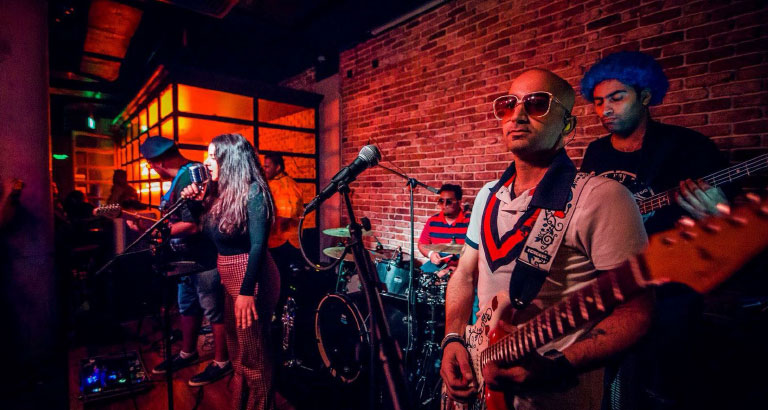 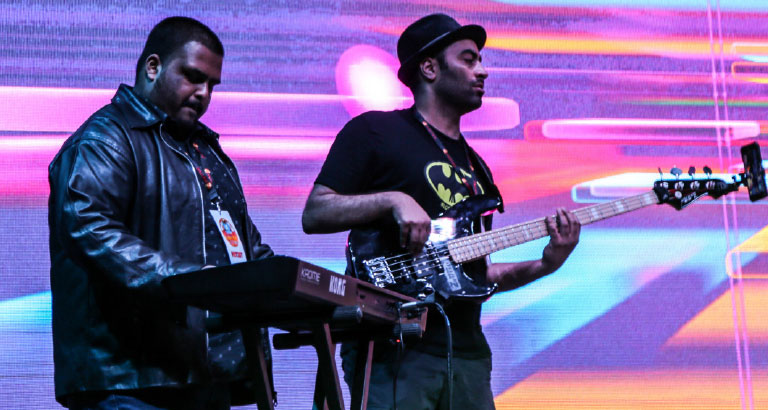 Bahrain-based band, The Jackrabbit Slims, have been mesmerising audiences at sell-out events in the Kingdom with their groovy music. Farah Baig finds out about their creative process, their thoughts on the music scene and plans for the near and distant future.

The Kingdom of Bahrain has been known to be a hub of creativity in the region for decades. As the years go by, this fact hasn’t changed but has rather been amplified by unmatched talent in the Kingdom that continues to reinvent, ignite and diversify the creative scene.

One band that has been getting people moving on their feet is The Jackrabbit Slims – a Bahrain-based band whose tracks can be described as dynamically funky and a burst of energy. How would most people describe the vibe at the venues they perform at? Electric.

What makes the band even more special is the fact that it consists of five seasoned musicians, Leila Matahen (lead vocals), Iba Almohsen (electric guitar and backing vocals), Ismail Gharib (bass guitar), Joel Dev (keyboards) and Krishain De Waas (drums), each with their own exciting journey through music.

“The band was initially started by Leila and Ismail,” says Iba. “One of the advantages of living in Bahrain is that the music community is closely-knit and so we were able to find like-minded musicians that are interested in the style of music we wanted to produce and that would be fun and easy to work with.”

Their individual sounds have culminated in the form of The Jackrabbit Slims’ Neo-Funk fusion of funk rhythms and pop-inspired melodies. “Our influences range from classic artists like the BeeGees and James Brown to more modern artists like Lizzo and After Funk. Any artist with the ability to captivate an audience and keep a party going is perfect for us,” he says.

In addition, the Jackrabbit Slims are known for their original tracks which are influenced by legendary musicians such as Aretha Franklin and Prince. “All bands and musicians have to learn covers because they teach us different styles of music, give us ideas and inspiration and also keeps us musically fresh. Even when you perform only originals, many bands still like to learn covers to keep learning and also to play the music they like,” he elaborates.

“There is no real fixed formula to how we create our music. Sometimes one of the band members will introduce the others to a melody or some chords and if we feel it, we collectively turn it into a full song,” he says of the band’s creative process. “Other times the main ideas are born out of a jam session and that’s the beauty of the creative process – it’s flexible.”

As with most compositions, some of the band’s music is inspired by real-life situations, much like their song ‘Platonic’ written by the lead vocalist, Leila. “I wrote the song, Platonic, about my current partner when we were still just friends. We had a long and beautiful friendship before we officially got together and this song is basically me wondering if my feelings were beyond friendship and if he felt the same,” explains Leila. “I must have been right because we’re married now.”

To date, the band has performed at several events including the Playlist Picnic (2022), Bahrain Rocks, Bahrain Jazz Festival (2018, 2019 and 2022), Muse Night at Calexico, Comic Con Bahrain (2019), and opened for the international sensation, Blue, at their concert in Bahrain in 2019.

“We’ve been fortunate to have participated in some great events. I think I’d have to say that one of our most memorable shows was the Bahrain International Jazz Festival 2021 where we showcased some of our original songs and received amazing reactions from the audience with a jam-packed floor,” says Iba.

Now that The Jackrabbit Slims have created a fan base in Bahrain, they plan on reaching out to an even wider audience. “We’re now getting in touch with various organisers in Saudi Arabia, Dubai, Kuwait and Egypt to export our music from Bahrain to the rest of the world,” he states.

The band believes that the music scene in Bahrain is and has always been one of the most welcoming and inclusive communities. “We are privileged to be a part of. We all show up to support each other and it never feels like there is ever any competition between artists or bands. Whatever your style of music is, there’s room for you,” he says.

In terms of further growth for Bahrain-based artists and support that could potentially propel them to the international stage, he says: “We all know that whenever an internationally known artist comes to Bahrain, the whole country is in an uproar. Tickets for artists like John Legend, Kings of Leon, Eric Clapton, and the upcoming Justin Bieber show sold like crazy.

“If Bahrain-based bands or artists had the opportunity to open for big name artists when they’re in our neck of the woods, it could be huge for a lot of us. There is definitely enough incredible talent on this island to stand out in a big way,” he adds.

While the band has created a significant impact and continues to grow its fan following, it’s still faced with challenges, namely finding the time and the cultural stigma surrounding music. “Since we all work its hard sometimes to find the time to practice and create music, but we make the time since we all love this band so much,” he says.

As for the stigma, Iba acknowledge that the situation is in fact changing. “I think many still view music as a pastime and hobby and they just don’t understand how serious we are about it. So, the support can be lacking, at times, from our surrounding environment, but our fans have been a blessing!” he states.

“They have shown us all the love and support in the world and we want to reciprocate that love by providing them with new and exciting music and to hopefully, one day, be able to represent Bahrain in the international scene,” he concludes.

The Jackrabbit Slims are currently taking a short break while some of the band members visit their family abroad over the summer. That being said, the band is also spending these sweltering months working away on their equally hot EP which will be released before the end of the year.

Be sure to check out their social media accounts (@jackrabbit.slims on Instagram) for all updates related to the release of their first EP and upcoming performances, which they expect to resume following summer.