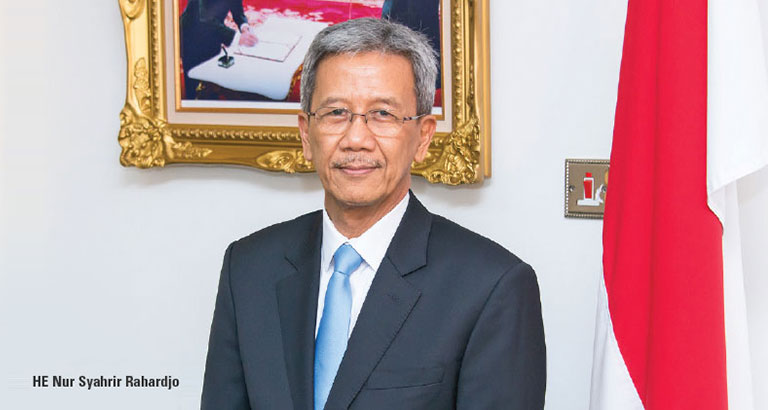 His Excellency is familiar with both the Kingdom and the wider region. He says: “My first diplomatic posting, from 1989 to 1992, was in Kuwait as head of the economic section. We also covered both Bahrain and Qatar. The first time I came here was in 1990 and I can hardly recognise it – though I remember the Bab Al Bahrain. There has been lots of development since then; it’s very impressive and I like it.”

After studying international relations at university, His Excellency joined the Ministry of Foreign Affairs in 1984. He began his career in Kuwait and was posted to Greece from 1994 to 1998 and San Francisco from 2001 to 2005. Surinam from 2010 to 2014 was his first posting as ambassador and he has always been engaged in economic affairs.

Having arrived in Bahrain just a few months ago, the ambassador says his first impressions [this time around] are favourable, adding: “I am surprised by how very friendly the Bahraini people are and I feel very welcome.”

The island’s Indonesian community is estimated at around 10,000 people but only about half that number are registered. “I believe some have come from other Gulf countries illegally and are working in the nonformal sector. Less than 1,000 are in the skilled sector,” says His Excellency.

“This is my big problem and I’m addressing it with the help of the LMRA and the police. Indonesia has already stopped some categories of workers coming to the Gulf but they still manage to come here illegally – it’s people-smuggling in some cases – we are working with the Bahraini authorities. They are being very helpful and I expect ever-closer cooperation in the future.”

The embassy also runs a shelter, which is currently home to 14 women who have sought diplomatic assistance. “Sometimes it’s a question of helping with paperwork, sometimes it’s in seeking a settlement from their employer so they can go home,” says the ambassador. He is fully committed to helping in any way possible.

The cordial relations also extend to commerce, where the current figure for trade between the two countries stands at over USD100 million per year – Indonesia exports USD41 million to Bahrain, in things such as vehicle parts, electronics, textiles and furniture, and imports USD61 million, in oil and aluminium. 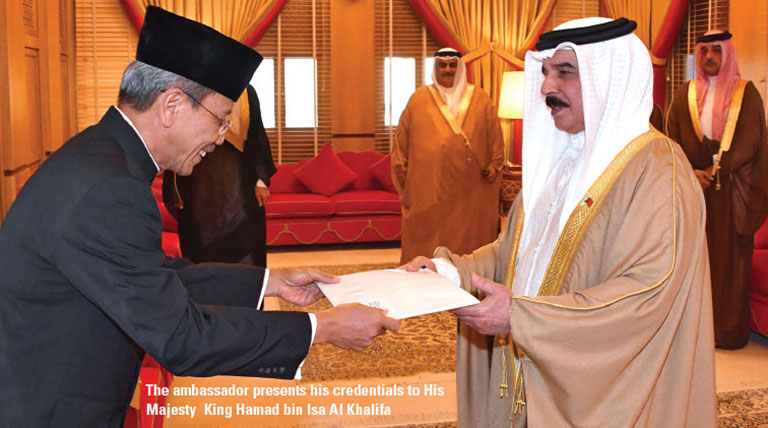 His Excellency says: “There is a lot of room for this figure to grow and one of the areas in which we hope to enhance relations is tourism. I have invited Gulf Air to launch a flight to Indonesia, which would allow it to pick up the Umra passengers going to Saudi Arabia, and I am hopeful of starting discussions on this.”

He adds that his ambition is to further boost ties, saying: “My goals include enhancing bilateral relations and trade and also increasing high-level cooperation. I’m hoping for senior level visits from the Indonesian Ministry of Defence and chief of staff for Bidec 2017 and also, towards the end of this year, I hope to welcome the Foreign Minister for the Manama Dialogues. Next month, there will be a ministerial visit by the SME Ministry [small and medium enterprises] at which we will share experiences. Also next month there is a trade expo in Jakarta, to which I have invited a number of business people.

“Further, on investment, we are offering some projects to Bahrain. We have a lot of raw material aluminium in Indonesia and we’re inviting Bahraini businesses to exploit that.”

Of his time in Bahrain, the ambassador concludes: “Hopefully I can do some good here, of course with the support of my Bahraini colleagues. My aim is to enhance and increase bilateral relations which, in the future, I hope will be stronger and stronger. And my message to everyone is ‘Visit Indonesia’.”