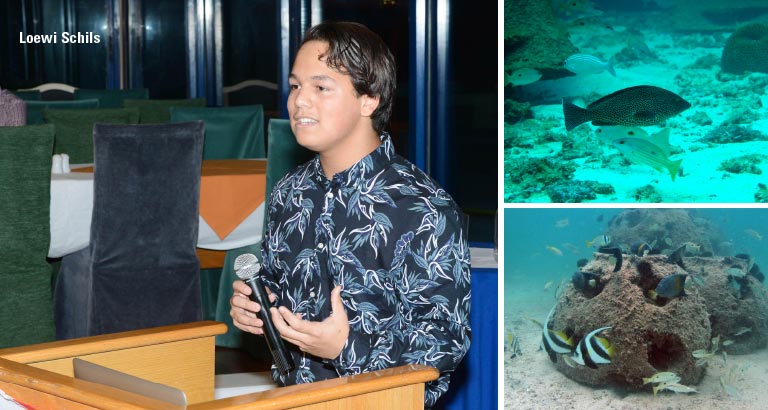 The teen prodigy started the project to inform people about the dangers faced by the sea such as dredging, land reclamation, over fishing and pollution, and subsequently aiming to garner support through its Facebook page.

“Our first initiative is the deployment of an artificial reef in Durrat Al Bahrain,” he says. “People can sponsor reef balls, which are basically fish houses. We chose Durrat because it is a protected area and the artificial reef would not fall under the usual fishing pressure as in open waters.”

Loewi is inviting sponsors to make donations, who will have their names engraved on a stainless steel plaque on the reef ball.

“This will be accompanied by a certificate of sponsorship and updated videos of how the reef balls are doing,” he adds.

“For those who want to sponsor an entire reef ball, the price is BD100. Other categories consist of BD50 for half of the plaque, BD25 for a fourth and BD15 for an eighth of it.”

Those who wish to donate an amount of BD1 or more will get a chance to get their names on a reef ball through a raffle.

“Bul Thama is one of the few remaining natural reefs around Bahrain,” he explains. “We aim to educate about the damage done to BOY GENIUS it by fishing and bring about the enforcement of the current commercial fishing ban which is in place.

“As a cultural heritage sight, it is protected from commercial fishing; however, it still happens. We also encourage people to use the mooring buoys which have been set there in order to prevent damaging corals by anchoring.”

Loewi is an avid fan of marine life, and started MOSLA as part of a graduating community service project to tackle key issues.

“The problem is that there is no system in place to impose environmental compensation for all the negative externalities which marine life has been subjected to,” he elaborates. “Fishing practices have become so effective that the sea does not have a chance to cope. On the other hand, there are also issues such as oil spills, invasive species, and a general rise in sea temperature, which also pose a threat to the integrity of the marine environment.

“It’s really a matter of cause and effect. If we examine these issues more closely, we find that they are due to the same central causes, as those listed earlier, this time on a larger scale.”

Loewi has a few activities planned in the pipeline in conjunction with his scheme.