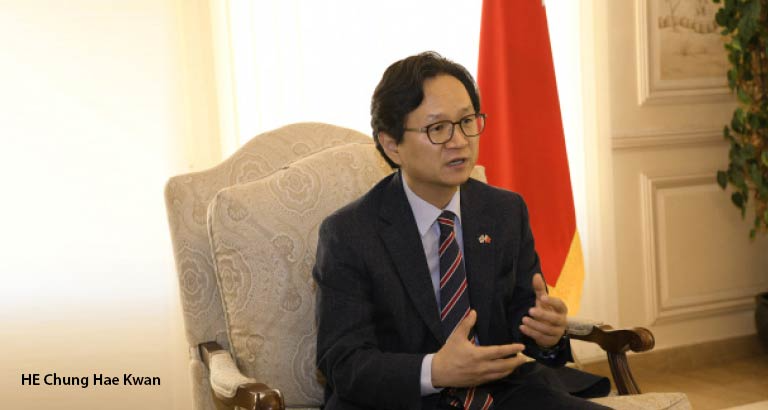 Korea’s new Ambassador to the Kingdom of Bahrain, HE Chung Hae Kwan, discusses the countries’ bilateral trade, cultural exchange and more with Bahrain This Month.

HE Chung Hae Kwan, officially assumed his duties in the Kingdom recently. HE brings with him a wealth of international trade experience from previous postings and has now set his focus on promoting economic relations between the two countries with the 45th anniversary of the establishment of political relations approaching next year.

As Ambassador, what do you consider to be your primary focus during your assignment in Bahrain?
Obviously, a major concern for me is the continuing development of close diplomatic relations between the Kingdom of Bahrain and Republic of Korea. I also look forward to developing commercial opportunities between the two nations wherever possible.

To date, Korea has contributed significantly to a number of high-profile projects in the Kingdom including the BAPCO expansion project, the Muharraq sewage project and the software which runs health care insurance system and the commercial registration system.

Could you highlight the current status of trade between Bahrain and Korea? Are there any developments in the works to further strengthen trade relations?
Five years ago, the annual trade volume between the Republic of Korea and the Kingdom of Bahrain was recorded to be USD686 million. That amount has increased yearly, so in 2019 the annual trade volume was recorded at USD800 million. Bahrain has a significant trade surplus with USD288 million of imports and USD513 of exports.

The main products imported from Korea to Bahrain are power equipment, including wire and transformers, automobiles and steel products. On the other hand, Naphtha, some petrochemical materials, and aluminum are the main exports to Korea. Interestingly, Bahraini blue crab is among the high rankers, amounting to USD11.5 million.

Korea and Bahrain have maintained substantial trade and investment flows so far, but I don’t suppose we have reached full potential yet. Now that both countries are discussing enhancing the trade and investment ties, as well as business partnerships, I hope we can make big strides in the near future.

The role of cultural exchange between the two countries has always been an important one. How is this being developed for the future?
I think that cultural exchange lays a key foundation for understanding each other. In this context, The Korean Embassy has hosted and facilitated many cultural events, such as traditional and modern musical or dance performances, a Taekwondo championship and film festival. Since 2016, the Embassy has also been running ‘Manama King Sejong Institute’ to provide Korean language and culture courses to anyone who is interested. Moreover, we sponsor the activities of a K-Pop fan club known as ‘Mansae Club’.

Stemming from exceptional circumstances of COVID 19, our window of opportunities to hold such events this year is very limited, but still, the Embassy has been trying to continue its efforts in this crucial area to the extent. For instance, Mansae Club has been organizing online events such as virtual cooking classes, hanging blessing and encouraging messages in Korean on a virtual tree to fight against COVID 19, and Pansori (Korean traditional rap music) performances since September. As an only off-line event, the Embassy will present its annual Korean film festival this year too in the newly opened drive-in theater this December in Bahrain Bay with further details to be shared soon.

Since next year will marks the 45th anniversary of diplomatic relations between the two countries, the Embassy believes that we may enhance the opportunities of cultural exchange next year. 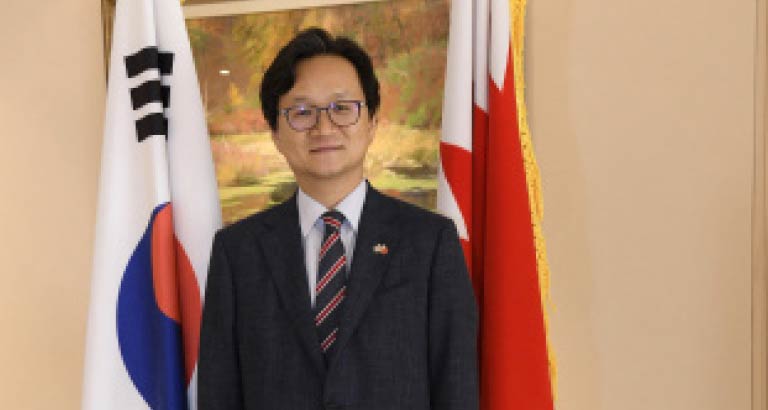 What is the secret to South Korea’s success with containing the COVID-19 virus?
It’s actually three factors – Testing, Tracing & Treatment. South Korea has learned through its experience, with SARS in the early 2000s and MERS in 2016, that implementing a systematic process of testing, tracing and follow-up is the best way of ensuring success against the spread of such diseases.

South Korea’s health insurance review and assessment programme reviews all statistics related to infectious and isolated patients to ensure compliance with quarantine measurements. The ability to track and trace is an essential pre-requisite to the treatment and cure of patients.

South Korean virus detection test kits are generally regarded as being amongst the most accurate available (approx. 99.61%). Although they take about 5 hours to obtain results, there is a new generation of tests being introduced which will obtain results in only 20 minutes.

How many Korean citizens are currently residing in the Kingdom? Which sectors are they engaged in?
About 200 Korean nationals currently reside in Bahrain. Some are employees of Korean companies working here while others are entrepreneurs in the areas of transportation, engineering, food and beverage and so on. Also, about 50 Korean flight attendants are working in Gulf Air.

How are they adapting to the challenges presented by the current situation?
They are making strenuous efforts in enduring this harsh period while preparing for the future. I believe that Korean residents have confidence that Bahrain will recover under the leadership of the government.

Are there any implementations currently in place to assist citizens facing any challenges? How is the embassy supporting them?
The Embassy maintains a close contact with the Korean Residents Association as well as individual members, and provides assistance on demand basis. Fortunately, none of the Koreans living in Bahrain has been infected so far.

Besides those efforts, we have been keeping posted all the necessary alerts and making essential materials such as high-quality masks available to the residents. At the same time, the Embassy has provided assistance to Korean businessmen facing difficulties entering under current restrictions.

Furthermore, given the next year marks the 45th anniversary of diplomatic relations between Korea and Bahrain, we plan to coordinate a series of high-level exchanges in various fields in celebration of the occasion.