From Manama to Madison Square Garden 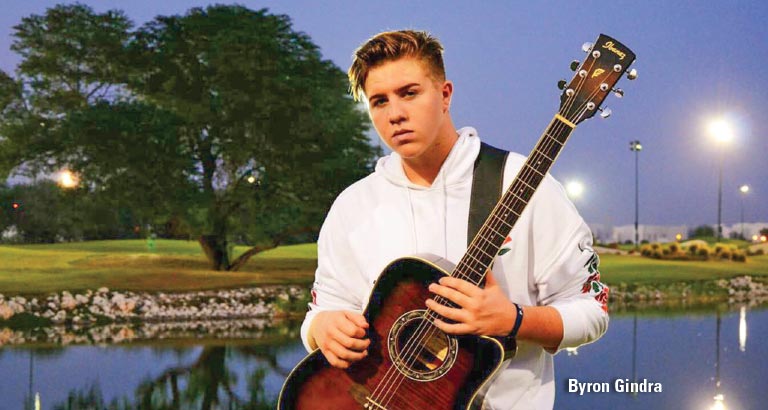 If you’ve been out and about in Bahrain of late, chances are you’ve come across Byron Gindra, whether it be at the first round of a pub karaoke contest “I didn’t go back, the judges’ comments didn’t seem particularly helpful” or performing a charity benefit for Tony the Dogfather “Anything for the animals,” this is a young man who’s certainly going out of his way to build a fan base.

A native South African, 16-year-old Byron is in the Kingdom with his dad Paul, who’s the director of food and beverage/executive chef at the Royal Golf Club, Riffa. The teen first visited the island two years ago for several months, then went back to South Africa where he was spotted by international talent scout Kim Myers who produces the International Arts Talent Showcase.

Byron explains: “You go through four rounds before the last round in Orlando, Florida, where I came second out of 500 entrants – it was a great experience and I got one of the highest call-backs – it also got me exposure in front of major record labels.”

The showcase led to Byron being taken on by agent John DeGrazio of Watersound Entertainment and the road to American Idol. From 5,000 hopefuls to make the audition stage, he won a place in the final 15 to appear in the live shows.

However, legal paperwork may have put a spanner in the works since, without an official entitlement to work in the US, he cannot take part in the show. Dad Paul has been working frantically to seek a way around the obstacle but Byron himself is philosophical saying his aim is to emulate Justin Beiber – who was discovered through posts on social media sharing site YouTube.

“I’m inspired by Justin Beiber because of what he achieved at such a young age, it’s shown me that if he can do it, hopefully I can too,” he says. And he does indeed have his own YouTube channel and has already released two self-penned singles Take My Hand and You Don’t Know Me.

Byron accompanies himself on guitar and also plays drums and piano “though, not at a professional level”. And he credits a musical family for the inspiration which saw him singing with the Drakensberg Boys Choir – known as South Africa’s singing ambassadors. “I’ve been singing all my life, since before I could talk,” he says. “There are a lot of musical people in the family and I remember singing to Pearl Jam in my dad’s car years ago.”

These days he listens to everything from Nirvana to Gary Moore, who, along with his manager dad, is one of Byron’s heroes. For the future, he would love to work with Justin Beiber and Bahrain’s own Paul Adams. He also wants to go home to South Africa to spend some time with his little sister Hannah saying: “Make sure you mention her, she will be really pleased.”

And, with feet firmly on the ground, he concludes: “It would be brilliant to be on American Idol, but, if it doesn’t happen, the next step is to go and spend some time in the States with Watersound Records. For now I’m just doing what I love and living the dream – my time will come.”

And, he confesses, that dream includes selling out Madison Square Garden, the 21,000-seat venue in New York!