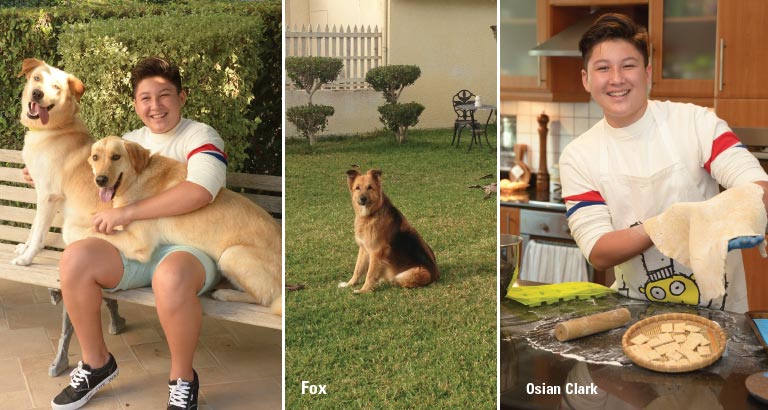 Teenager Osian Clark tells Liz O’Reilly how baking healthy snacks for his own dogs inspired him to set up an online business to help other animals.

Fox Phood was launched at the beginning of Ramadan offering yummy dog and cat treats, all home-produced by the 13-year-old St Christopher’s School student.

He explains: “Because I like cooking, my mum and dad both brought me up within the food industry. And we prefer to have homemade healthy food, so I decided to also cook for our dogs so they can eat healthier.

“I have two dogs, they are a brother named Flash and sister named Goldie, who will turn three in October. I used to have another dog —his name was Fox. But, unfortunately, due to old age, he passed away last January at the whopping age of 16! So, in honour of him and his grumpiness all through my childhood, I named the company after Fox and Phood because I wanted to state clearly it was a food-related business and I spelt it in a funny way to create a more urban chill feeling.

“All the ingredients used are totally safe to be consumed by animals and consist of a base mixture that includes wheat, eggs, milk, flour, baking powder/soda, coconut oil, peanut butter, corn syrup, apple, carrots, shredded coconuts and oats.”

Osian also makes cupcakes, which are a bit more substantial, and hands them out when he goes with his mum Weena to feed stray dogs and cats near his home in Saar. And, should you desire a birthday cake for your pampered pet, that’s possible too.

He says his mum is his main inspiration, explaining: “She is definitely an animal lover. She was the one who inspired me the most. Since I was young, she has been filling [our home] with all different kinds of animals — I have guinea pigs, at the highest we had a total of 12, fish, birds — sounds like a zoo!”

By selling his doggy cookies and kitty nibbles, Osian aims to raise funds for animal welfare organisations such as the BSPCA and Tony the Dogfather as well as highlighting the plight of the island’s stray population.

He says: “We can’t do everything but if we can help out a bit, we should. And they all need donations. I hope I can also bring awareness of stray dogs and cats to more people to help them care and love animals. Having a pet is not just for fun but is a commitment. Don’t just dump them when they are not wanted. I would like people to know responsibility is very important. Animals are not rubbish!”

Osian says he wants to continue helping animals into adulthood and would consider a career in animal welfare, “who knows?”

For now, though, he just wants to sell as many cookies, cat treats and cupcakes as he can. The treats start at BD2.500 for a half kilo of dog biscuits and they can be ordered for collection via WhatsApp on 35 579-123 or at Fox Phood on Facebook or Instagram. They’re also available at Weena’s lash spa in Seef, near the Seef petrol station. Osian adds: “Sorry, no deliveries. I’m using all my pocket money [and donations from mum] to make the cookies!”