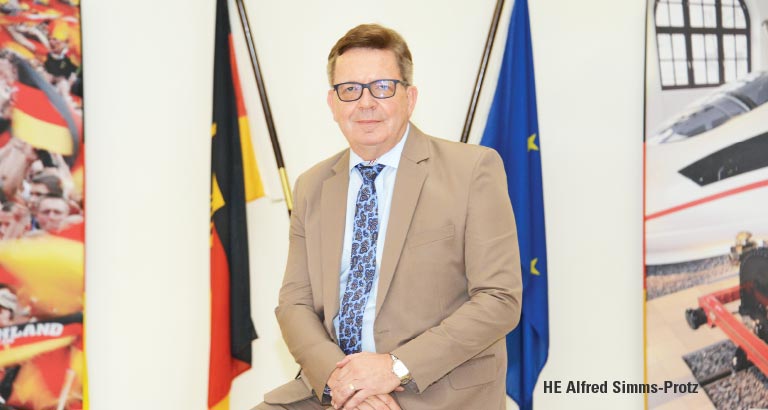 Having arrived in July 2015, His Excellency says his aims were that of any ambassador – to build on relations and help increase investment between the two countries. But, pragmatically, he concedes: “That was my intent but I have to be honest and say I think I have just maintained the stable, friendly level but there has not been a dramatic increase in visits or investment. The chances for an ambassador to make a difference are limited; it depends on reciprocal visits. There are a number of factors that have limited that in the case of Bahrain. Particularly in the last six months our [German] politicians have been preoccupied with the elections that took place on September 24 and our foreign policy focus has been very much on Europe – areas such as the EU after Brexit and the issue of refugees as well as the Trans-Atlantic relationship.

“Other than our Defence Minister, who came for the Manama Dialogue, there has not been a high-level visit for a while. I have been trying to get the Foreign Minister to come and I am hopeful that will happen in the not too distant future.

However, recent news of a large-scale investment in the Kingdom by German company Armacell – which in May broke ground for a factory at Bahrain International Investment Park that, when completed in 2018, will produce a range of products, including high-density materials and elastomeric insulation for heating, ventilation and air-conditioning systems – is expected to excite increased investment interest.

The project will create around 100 jobs with some workers coming from Germany, adding to the 500-strong local German community, and others being hired locally.

His Excellency says: “I think German companies can find excellent opportunities here, because of the location as a gateway to Saudi Arabia and other countries in the region and we have been in discussions [with potential investors] in areas such as manufacturing, logistics, environmental technology, solar energy et cetera – the country is definitely an attractive investment proposition, on top of being the world’s number one destination for expats, as an international survey confirmed recently.

“As in the case of Armacell, the location is important, particularly now with increased ease of border processing. Also, lower costs in comparison to the UAE, excellent infrastructure and the easy, liberal lifestyle give Bahrain the edge for both companies and their employees.”

The bilateral volume of trade stood at EUR359 million (BD158 million) last year, with Bahrain exporting EUR18.6 million (BD8.2 million) and importing EUR340.2 million (BD150 million) in items such as cars, machinery and pharmaceutical products. For the future, His Excellency is confident this can be increased as investment opportunities continue to grow.

Moving forward, plans for the coming year include a major cultural event which is still in the pipeline but expected to be during the winter months. The embassy will also be celebrating German Unity Day on October 3 and the new – or old – Defence Minister, once named, is expected to travel to the island for the Manama Dialogue in December, which His Excellency says is always a useful event, providing an excellent opportunity for bilateral meetings on the margins, including with the host country Bahrain.

In conclusion, His Excellency says Bahrain will continue to hold a special attraction for him even after his term as ambassador comes to an end, explaining: “I enjoy interacting with the people of Bahrain. They are very open, welcoming and friendly – that has been my experience from day one, and I truly appreciate that. Newcomers instantly feel at home in Bahrain, it’s so easy to live and work here. I also have to say I love the weather – even in July and August! Some people complain about the heat but I find it makes me feel alive!”