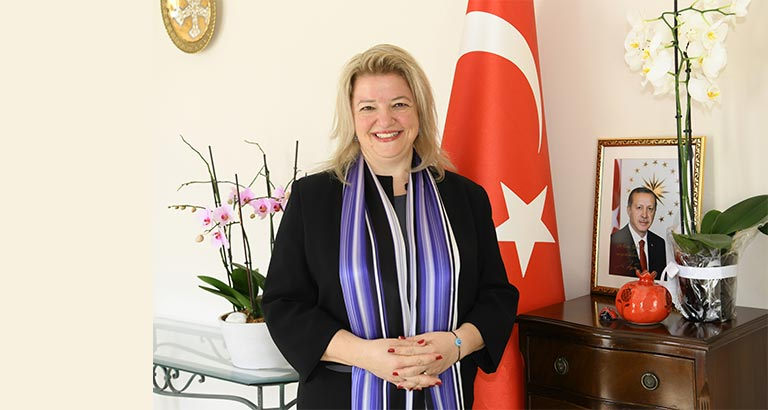 Turkish Ambassador to the Kingdom of Bahrain, Her Excellency Esin Çakıl, is a keen diplomat who understands well the bond the two countries share and aims to further bolster their bilateral ties.

Her Excellency Ambassador Esin Çakıl’s goal as a high school student was to be a diplomat. “My strongest motivation was to explore different cultures and to meet with new people,” she says. “I wanted to contribute to the shaping and implementing of Turkish foreign policy and to find solutions to global problems.”

Her dream was not out of bounds in a progressive country like the Republic of Turkey, with gender equality being the norm in both public and private sectors. “Our Ministry of Foreign Affairs boasts 72 women ambassadors doing their jobs in the best manner all across the world,” she says.

Her Excellency’s Diplomatic Journey
Her Excellency Çakıl’s first foreign posting was in Dakar, the capital city of Senegal, in Africa, between 1999 and 2000. “Africa is a unique continent and the Senegalese are very friendly,” she remembers of her time there, spent in productive, impactful work. “As Turkey has always attached particular importance to develop relations with African countries, I contributed to the efforts to enhance the status of women and children in the society.”

She feels honoured to represent her country in the pearl of the Gulf – Bahrain. “Since I started my duty here in March this year, I have worked with excellent people. I am very touched by the hospitality and sincerity of the Bahraini authorities and people,” she says.

Forging New and Strengthening Old Ties
Touching upon the fact that Turkey and Bahrain have enjoyed deep-rooted relations bound by religious and cultural ties for centuries, Her Excellency says, “With the initiative and vision of our leaders, we have strong cooperation in the fields of health, tourism, trade, education, construction and defense, as well as coordination at international and regional organisations. We are keen on further enhancing them. Recently, our Foreign Ministers had a meeting on the occasion of the 76th UN General Assembly, and we continue to work on more high-level visits to discuss opportunities in bilateral relations and regional cooperation.”

Establishing new avenues of cooperation and deepening the existing ones are Her Excellency Çakıl’s primary goals during my tenure in Bahrain. Turkey and Bahrain already collaborate in many areas. Her Excellency elaborates: “Our contractors have undertaken prestigious projects in Bahrain such as the extension of the Bahrain International Airport by TAV and ALBA Line 6 expansion project by GAMA. We are proud that they have been successful in delivering their promises in a timely manner, taking part in the Kingdom’s 2030 Vision.”

Turkey has often partnered with Bahrain in the health and medical sector. The Turkish Erciyes University had set up an Oncology Centre in the domains of hematology, oncology and hematopoietic stem cell transplantation in King Hamad University until 2016, and the Yunus Emre Cultural Center has been giving Turkish language courses at the University of Bahrain since 2017, teaching close to a hundred students this year.

An Eye on Untapped Potential
With USD380 million of bilateral trade between Turkey and Bahrain, Her Excellency Çakıl maintains that there is greater commercial potential between the two nations. “As of 2020, Turkey’s exports to Bahrain stood at USD202 million and Turkey’s imports from Bahrain measured USD178 million,” she says. “I believe that we can find newer areas of cooperation in a post-pandemic world, in which the economies of both countries are showing signs of recovery.”

In line with this outlook, Turkey aims to further enhance relations with Bahrain in the fields of agriculture, renewable energy and construction amongst others. “Turkey has great experience in agriculture; we are the 10th biggest agricultural producer in the world. We know that Bahrain attaches importance to agriculture and has already achieved a strategic stock of food security. We have a huge potential with regard to supply-chains,” she says.

Her Excellency Çakıl is optimistic about new Bahrain-Turkey collaborations in sectors like renewable energy, and contruction. She says, “The Kingdom prioritises effective use of energy with a green perspective, and Turkey ranks 13th, globally, and seventh in Europe, by way of solar capacity. Similarly, Turkish construction companies have made quite a name for themselves with prestigious projects all around the world, having the second-largest construction sector globally. Even under Covid-19 conditions, construction projects in Bahrain continued to be implemented.”

With its sound economic structure and business-friendly eco-system, Bahrain is an attractive destination for Turkish enterprises. On the other hand, Turkey offers Bahrain great vistas in tourism. With the resumption of direct flights from Manama to Istanbul, Trabzon and Antalya on the acclaimed Turkish Airlines, Her Excellency observes that Turkey is one of the most preferred touristic destinations for Bahraini citizens.

“With our ‘Safe Tourism Certification Programme’, we offer our Bahraini sisters and brothers a Covid-19-free vacation,” she says. We cherish their interest in Turkey and hope to boost the numbers of visitors from both Turkey and Bahrain.”

Contributing to Social Causes
Ambassador Çakıl’s efforts have contributed effectively to her Government’s work in the area of women’s rights. “The woman is the pillar and cornerstone of society,” she asserts. “In this light, Turkey announced the first Human Rights Action Plan in March 2021, which includes effective measures to protect women’s rights. Also, our 11th National Development Plan 2019-2023 comprises goals and measures to empower women, prevent discrimination, and ensure that they have equal access to the rights, opportunities and facilities available to men.”

She has also aided efforts for the wellbeing of refugees in Turkey, mainly from Syria. “Turkey hosts four million displaced people, including 3.7 million Syrians. Along with those still in Syria, we support nine million Syrians.

“Syrians in Turkey have access to health, education and social services, free of charge just like our citizens, and without significant support from the international community, having spent over USD40 billion for this purpose from our national resources.”

From one million school-aged Syrian children in Turkey, 800,000 go to school. “Our target is to reach 100 percent in terms of school attendance of refugee children in coordination with the UNICEF and UNHCR.”

Along with working towards greater alliances between her country and Bahrain on the macro level, Her Excellency Çakıl takes the welfare of the approximately 1,500 Turkish citizens in Bahrain very seriously, making it a point to be supportive and approachable to them at all times.  “The Republic of Turkey very recently celebrated  its 98th National Day, on the occasion of which I extend my best wishes to the Turkish citizens in Bahrain,” she says.