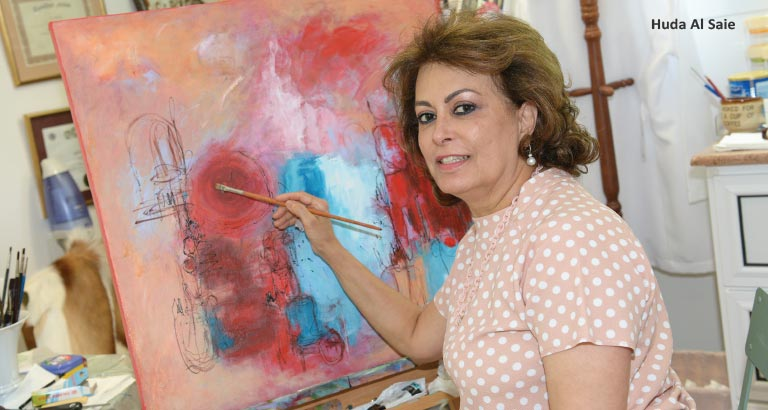 The island’s first and best-known porcelain artist, Huda Al Saie’s works can be seen in high-profile spots such as Shaikh Ebrahim Centre, Bahrain Fort and more. She tells Liz O’Reilly what’s behind her decision to take up a new artistic medium for a show of acrylic abstracts.

I had also noticed, over the last few years that, these days, people seem to be less interested in handicrafts.”

With her father passed away at a very young age, Huda’s mother, along with her aunt, built up a fashion business to support her family. Eventually, as Scada Group, they owned several boutiques in Moda Mall selling designers such as Roberto Cavalli and Christian Lacroix as well as a Betty Barclay outlet in Al Aali Shopping Complex. Both Huda and her sister took active roles in the business after graduating from university.

But Huda’s first love had always been art and in 1983, at her sister’s urging, she went to Geneva to study painting on porcelain. And though most other members of her class were elderly “there were one or two young girls but everyone else was much older” she found she really enjoyed this creative endeavour and a life-long second career was born.

Returning to Bahrain, she taught the subject widely, turning out many generations of porcelain artists while still helping to run the boutiques.

However, over the years, with the opening up of the regional markets coupled with online shopping, business declined. She says: “The heyday for the fashion business was the ‘80s, ‘90s and early 2000s. But these days, the younger generation barely even go to the malls, they prefer to shop online which made business very tough.

“Two years ago, my mother passed away and my aunt decided to retire, so we took the decision to close down the shops.

“I had also noticed, over the last few years that, these days, people seem to be less interested in handicrafts. Where once I was teaching five classes a week, there just weren’t the people interested to study so much anymore.

“But, it’s good. It has given me the chance to think and decide it’s time for something new.”

Having minored in fine arts at the American University of Beirut, alongside her major in mass communications, Huda already had a background in various different artistic mediums. And, once again, it was her sister who urged her to take her creativity to the next level. The result is an exhibition called Mirage of Colours which will run at My Café in Adliya from June 8 to 15.

Determinedly abstract in nature, the pieces are bright, texture filled and about as far from the delicate porcelains Huda is known for as it’s possible to be.

She explains: “The inspiration for the acrylics comes from feeling free in front of the canvas. Because, for 35 years, I was so busy between the porcelain, which is my love and my hobby, and the boutiques and travelling two to three times a year to source materials, that there wasn’t really time to venture to do anything else.

“I was working on this exhibition in the spring time, looking out at the garden. I started with patches of colours and was then trying to create rainbow colours. The pieces also feature black lines which are a technique I picked up from Instagram. And the names are open to each person’s interpretation of what they see.

“I’ve also added calligraphy, so people will see something familiar but very different from my usual pieces.”